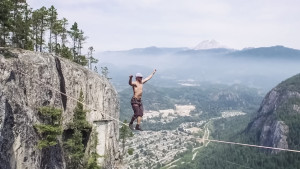 The Canadian highliner walked a 64 meter long highline without harness, 290 metres above ground across the Chief North Gully Squamish in British Columbia.

He beat the previous world record of 55 meters, set by Andy Lewis.

Highlining is the more extreme version of slacklining where the line is rigged very high off the ground. Usually, the highliner is safely attached to the line by a leash. Free solo highlining is where the practitioner walks without a safety leash.

According to CTV News Vancouver, a Canadian news portal, the Canadian highliner trained for the “free solo” walk by doing the same trip several times while wearing an ankle harness that tethered him to the highline. “It was something that was super intense but it’s something I’ve trained for and built up for so it’s not something I felt I was risking my life doing,” Seabrook told CTV Vancouver of the record-breaking event. When asked about his fall on the line, he continued by saying “I catch the line every time whether I’m wearing a harness or not wearing a harness, it’s a rush – it’s awesome”.

The record for the longest free solo highline was previously held by Andy Lewis (a.k.a. “Sketchy” Andy) at 55 meters.

About the author:  Simant Verma is a Mathematics graduate from Delhi University. An avid slackliner and mountaineer, he can be found balancing on lines in the parks of Delhi. Currently he is a marketing intern at The Outdoor Journal