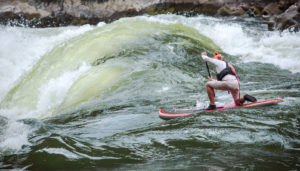 But they weren’t just paddling for themselves; they were paddling to raise awareness about rhino poaching.

“No crocodiles.” Such was the precondition upon which the American stand-up paddle boarder (SUP) Brittany Parker agreed to join a first descent expedition to Africa’s Zambezi River. There would be enough danger without having to worry about a croc coming up while she was in the middle of a rapid, Parker reasoned. Reassured by expedition team member Paul Teasdale that there wouldn’t be any crocodiles on the river, she signed up, and two weeks later was on a plane to join a team of eight paddlers with the ambitious goal of SUPing the Zambezi river below Victoria Falls.

And they would do so all in the name of an unlikely cause: saving rhinoceroses.

Stand-up paddle boarding is a comparatively new sport on the world stage. Taking a SUP down rapid-riddled rivers is even newer. While whitewater kayaking is more dangerous than SUP, the latter is arguably more difficult. With SUP, the goal is to “clean” each rapid, which means remaining upright on the board from the beginning of the difficulties until the end.

South African whitewater kayaker Bertrand van der Berg has been paddling for nearly 18 years. Over the past three he has become a pioneer in whitewater SUP, completing first descents like the Ash River in South Africa.

At a whitewater festival in early 2016 with his friend and fellow South African paddler Shane Raw, Van der Berg made a joke about doing the mighty Zambezi on a SUP. Raw knew the Zambezi well, and quickly turned the joke around: Why couldn’t they SUP the Zambezi? he wondered.

The two knocked around the idea for a few months, texting back and forth, and finally decided to go for it. “The more we realized it would be possible for us to do,” Van der Berg says, “the more we got worried and paranoid that someone else would do it before us.”

Raw and Van der Berg quickly assembled an experienced team. They decided eight was the magic number; eight people on the river would help to make things as safe as possible and allow them to get high quality video and photos.

And with that line-up, the expedition team was set.

There are three Northern White Rhinos left in the world, the Vietnamese Rhino went extinct in 2011 and most other species of rhino face similarly grave futures. Roughly one to two rhinos and one hundred elephants are killed everyday by poachers. With the prices for rhino horns and the ivory in elephant tusks often eclipsing that of gold, poachers will stop at nothing to get them, even killing guards tasked with protecting orphaned animals at rhino and elephant sanctuaries.

Shane Raw and Bertrand Van der Berg recognized how lucky they were to be able to do what they love and undertake expeditions like the one they were planning for Zambezi, and so they made the decision to use the trip as an opportunity to raise awareness and funds for a worthy cause. When they learned the dire situation facing the prehistoric-looking rhinos, they knew they had found it.

They discovered a charity called Care for Wild which operates the largest orphan rhino sanctuary on the planet. Using the visibility of their expedition, they would seek to raise at least $10,000 for Care for Wild.

Expedition member Andrew Kellet says, “As daunting as the challenge of SUPing the Zambezi was, it was clear that the fight against rhino poaching was that much bigger. […] The reality is that at the current levels of poaching in Africa, our children’s generation will never see a live rhino in their lifetimes.”

With a team of eight assembled, a mission and a cause to motivate them, and an ambitious goal on the river itself, there was only one thing left: a name.

The first time that the entire Stand-up 4 Rhinos team gathered in the same place was at the start of the expedition in Zimbabwe in early-November 2016. Paul Teasdale’s house served as base camp. With only two weeks to scout 24 rapids and mount a full attempt on the river, there was no time to waste.

They spent the first day on rapids 18 to 24—the easiest section of the river. “This was just to get used to the boards on a big volume river like the Zambezi,” Van der Berg explains. And it was a bit of a shock to the system: “This was only the small stuff, and it was already quite big,” he says.

Andrew Kellett arrived a day late and missed that first day of paddling, but says that when he got there, “The stories made it clear that this was no ordinary challenge.”

The Stand-up 4 Rhinos team spent the following two days on the same section of river, dialing in the easier section of rapids 18 to 24. Each paddler had to figure out how to adjust to the size of the river, as none of them had ever run anything so massive on a SUP.

Even though it was still a long-shot, Bertrand says the consensus after those first runs was, “‘It might actually be possible…’”

Once the waters of the wide and steady Upper Zambezi River thunder over Victoria Falls, they would wind their way through the much narrower Batoka Gorge, turning into a turbulent superhighway.

“Early in my kayaking career I found myself tackling its mighty rapids with names like ‘Overland Truck Eater’ and ‘Devil’s Toilet Bowl.’”

“Nothing can compare to the Zambezi Gorge and its huge rock walls,” Nadia Almuti says.

The team’s hike in and out of the steep gorge each day was punishing. Each person came away with memories of near-fainting episodes or borderline heatstroke. But even in 40 degree heat, the natural novelties that the Americans and even the South Africans encountered in Zimbabwe were always a joy. One night, for example, the team had some unexpected visitors. “There were baboons jumping all over Paul’s house,” Almuti says. “We had to close all the windows and doors. We could hear them tromping around on the roof.”

“It’s all just so wild,” Brittany Parker says. “Elephants were walking around, there were holes in concrete walls from where they walked through them, and sometimes traffic would be stopped because elephants were crossing the street. It’s a crazy place, but I loved it so, so much,” she says.

After a rest day, Van der Berg says, “We decided to step it up. Went to the hard sections. The first and middle part are much more serious than the last easier part.” In these sections of the river there are “definitely some Grade 5 rapids.” While not necessarily as technical as some other Grade 5 rivers, the Zambezi “just has so much volume and is so strong,” he says.

Even before they started working on these upper sections of the river, everyone knew there were a few rapids that they were going to bypass. “We knew we weren’t going to attempt number nine on our SUPs this trip,” Van der Berg says. “Too dangerous and hard. One day, someone might do it on a SUP, but not for a while probably.” They also opted to skip rapids seven and eleven after scouting them further. Those rapids are difficult and risky even in kayaks, Van der Berg notes; there’s a reason that number nine is known as “Commercial Suicide” and number seven as “Room of Doom.”

But just because they skipped the most dangerous rapids didn’t mean they weren’t taking on substantial risk. Parker remembers one particularly hairy moment on rapid fourteen. “Nadia was going straight for this massive pourover [a steep drop-off],” she says, “and Paul threw a rope, but she couldn’t see it. So she went right into it. My heart stopped. It’s the kind of pourover that could recirculate you, trapping you under the waters after you go over it. It was super scary. Eventually she got spit out. I was so scared, though. I walked around the rapid after that.”

Finally, on their last last day of the trip, having practiced all of the different sections of the river as much as time allowed, they set out to paddle the whole thing in one go. “We did a full run from number one to 24,” Van der Berg says. And between all the team members, at least one person cleaned each rapid.

The Zambezi, for all intents and purposes, had seen its first SUP descent.

It turns out Paul Teasdale lied to Brittany Parker: There were indeed crocodiles on the Zambezi.  “It was crazy getting over my fear of the crocs,” she says. “But I’m glad Paul lied to get me there.”

Parker and her teammates saw elephants, baboons, crocodiles and all sorts of other wildlife on their Zambezi expedition. But though they light up talking about all these amazing creatures and their adventures on the water, they are more concerned with the animal they didn’t see. Though the SUP aspect of the expedition is over, the team is still focused on raising awareness of the plight of rhinoceroses.

While the paddlers were on the Zambezi, the direness of the situation facing rhinos was underscored for them once more. “We learned that while we were in Zimbabwe two poachers broke into [Care for Wild’s] facility to try to get at the rhinos,” Almuti says. Clearly there is still much work to be done.

So far Stand-up 4 Rhinos has raised approximately $3,500 out of a $10,000 goal. A documentary about the expedition and the charity initiative will be released later this year.

To do your own part in standing up for rhinos, please consider making a donation here and visit the team’s website at http://standup4rhinos.org.