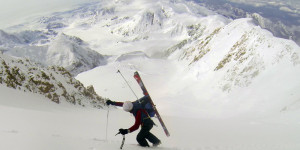 Summits of My Life – Kilian Jornet Does Denali In Record Time

Jornet’s successful ascent and descent of the highest peak in North America, via the Rescue Gully route, means the achievement of the sixth route in the project Summits of My Life.

“It has been a great adventure. Weather conditions were bad during much of the route. Yet, I managed to break the record, so I’m very satisfied. I took a different route rather than the usual one to avoid a stretch with fixed ropes because I wanted to stick to the values underlying the project, that is, attempting the record using as little equipment as possible, and without help” said Jornet.

Kilian Jornet completed the sixth challenge of his project Summits of My Life with the ascent and descent record on Denali (also known as Mount McKinley), the highest peak in North America (6,194m) with a time of 11h 48’ last week. Jornet took the Rescue Gully route and not the most frequently used West Rib route, as recounted in some press reports.

On May 26th Jornet set out for Alaska accompanied by Seb Montaz, Jordi Tosas and Vivian Bruchez. Once again, friends surrounded him to form a team that would help out with the filming and the checking of safety measures along the way.

Arriving in Anchorage, bad weather conditions forced Jornet and the rest of the team to wait a few days before flying to Denali’s base camp located at 2,200m. From here, they ascended to the camp at 4,000m, where the group spent a few days getting used to the altitude and inspecting the area. Several trips were made to get to know the terrain, including the ascent of a 5,000m peak and another one to the summit of McKinley (Denali in the native language), located at 6.194m, via the traditional route (the West Rib).

Throughout the expedition weather conditions were harsh, with only three days of good weather out of the sixteen days spent on Denali. Blizzards, fog, rain and low temperatures were present during the remaining days. On the seventh day at the 4,000m camp with a break in the weather and a forecast of bad weather to return in the coming days, despite not being fully acclimatised, the group decided to make an attempt on the record, on June 7th.

It was 7:10 am and the thermometer read -20ºC. There were gusts of up to 40km when Kilian Jornet started out from base camp at 2,000m. He made the climb on skis, using crampons in some of the more technical sections, and the descent was on skis.

The attempt began at base camp with the aim to reach the top and come back down in the fastest possible time and without assistance. The route chosen for both ascent and descent was the Rescue Gully, which follows part of the traditional route with some deviations. Jornet explained: “We opted for an alternative route, a bit more technical, to avoid a stretch with fixed ropes. We want to climb mountains in the purest way possible.”

The ascent was carried out according to plan, as Jornet explained: “I set off well and at a very fast pace as far as 4,000 m. From there up to 5,000m there were strong winds and my feet got quite cold. The real bad weather started at 5,000m. From there onwards to the summit I found it hard going, due to both the intense cold and the difference in altitude which was starting to take its toll. I had to stop every so often to warm up and that slowed me down a bit. On reaching the top, it took me about 10 minutes to get my skis on and to prepare myself for the descent. It was still windy and very cold. From there, I skied down feeling a bit better, but visibility was poor and so I had to be careful. At that moment I was not fully aware that I was breaking the record and it was not until I got all the way down that I looked at my watch and realized I had made it!”

The chronometer showed 11h 48 ‘ (9h 45 ‘ to the summit) when Kilian Jornet arrived back at base camp, beating the previous record established in 2013 by Ed Warren (16h 46 ‘). Reaching this summit, Jornet completes the sixth challenge of his project Summits of My Life, following the philosophy that inspires the team. Throughout the journey, Jornet was accompanied by film director and mountain guide Seb Montaz, who filmed the start and the first part of the route, and climbers and skiers Jordi Tosas and Vivian Bruchez, who positioned themselves in Rescue Gully to film him.

“I’m delighted with this record. Although it wasn’t technically difficult, I had to face two tough factors. On the one hand, the cold and the wind, which slowed me down throughout the route. On the other hand, the altitude, which affected me substantially from 5,000m.”

“I’m delighted with this record. Although it wasn’t technically difficult, I had to face two tough factors. On the one hand, the cold and the wind, which slowed me down throughout the route. On the other hand, the altitude, which affected me substantially from 5,000m. Beyond that, it has been an amazing experience, and two striking memories will remain: the moment I reached the summit (not because it was beautiful, because there was fog or that I could not see a thing, but because I thought ‘now my legs will finally stop hurting’). On the other hand, the moment I got to Rescue Gully, where Jordi and Vivian were waiting for me and we shared a few moments together, which were very special,” stated Kilian Jornet after spending two weeks on the ridge without outside communication.

In addition to the record on McKinley, Jornet and the rest of the team spent two weeks in the area climbing and skiing in places such as Orient Express and the West Buttress.

There are now three more events to go in the calendar of Summits of My Life. In 2014, Jornet is hoping to summit Mount Elbrus, which was unsuccessful in 2013 due to bad weather, and Aconcagua (6,960m). In 2015, Jornet plans to conclude the project with the ascent and descent record attempt on the world’s highest mountain, Mount Everest (8,848m). The challenges are being recorded in a film, to follow Déjame Vivir, which chronicles the adventures in the second year of the project.
Record facts