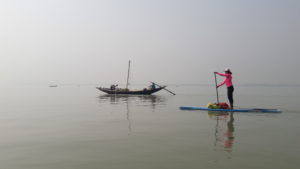 Shilpika Gautam left her cosy life in London to paddle across the Ganges in India.

On her quest to bring awareness to water pollution issues, she breaks her own barriers and sets a world record in stand-up paddling.

“You should just go out there and do whatever you want and be a bit reckless. I don’t always know what I’m doing, but I’m going to go and make it up as I go along. And as you make it up things become real,” says the world-record holder.

101 days, an enthusiastic team of four, and 2977km of stand-up paddleboarding on one of the most important and controversial rivers of India – the Ganges. Shilpika Gautam along with her friends – Pascal Dubois, Kumaran Mahalingam and Spike Reid , and with help from WaterAid, set about to bring awareness on water pollution issues through this mammoth task. During the attempt, Shilpika not only became the first woman to SUP across the Ganges, but also set a world record. She clocked up over 2600 kms in paddled distance – the longest distance stand-up paddleboarded by a woman in a single continuous journey vs the existing record of 2231 kms.

Shilpika Gautam grew up in the city and her experience of rural life and challenging adventures were minimal when she decided to set off on this mission. Working as a consultant and living in London for a decade with an MBA rather than expedition experience, she might not be the typical adventurer to break unknown ground.

”I didn’t have the background for something like this, on paper. I had a very corporate life path and decided to challenge it. When you are younger, especially if you grow up in India, there is a certain path that everyone kinda has to follow with school, university and a great job,” she told The Outdoor Journal in an interview.

A longer trip to her home country, India, in 2015 brought the urgent local and global threats of water pollution to her attention and sparked her wanderlust. She felt she needed to know more about the issue, and thus the idea of descending the Ganges on a stand-up paddle was born. White water, a hard slog, unpredictable foggy weather and currents were some of the dangers that were ahead of her and her team.

The journey took them from Gaumukh, the snout of the Gangotri Glacier, and the source of the Ganges all the way to Ganga Sagar (Sagar Island) in the Ganges Delta region. In between they crossed a number of villages and urban cities.

“Especially in the bigger cities we saw a lot of pollution and we used to document that. As soon as you enter the most polluted areas, you can feel it. The smell comes to you before you see the shit in the water. It’s like the combination of something that has died with something chemical, mixed with stagnant water,” she says.

Despite horrible smell and disgustingly dirty feet, the river was cleaner than she had expected and incredibly beautiful. “We saw 867 dolphins! That shows the river is not as bad as we imagined it to be!”

The SUP-expedition was set in motion with reckless confidence where she was determined to see things through and crossed emotional, mental and physical barriers along the way.

Still, the biggest challenge in the end was to find the balance between adventure and environmental focus: “How do you stay true to that vision because the adventure itself takes a lot out of you?” she said.

Stand up paddling is a new sport in India, thus Shilpika and her team created quite a stir along the way. The word spread quickly among the villagers when they stopped and hundreds of locals met them each time. There was no privacy and being the only woman as well as the only who spoke the language on the team, sometimes took its toll.

“You want to go into the village and you get bombarded by 500 people. Each one asks the same question and you have to repeat over and over. That’s part of the process, and I wanted to do it. But some days I just didn’t have the physical and emotional energy to do it,” she says.

“When you go into a really small village, people put a lot of faith in you, because you’re asking them questions about their life and can potentially change how they live. But in that moment, you are helpless, you can’t do anything,” she adds.

Despite the heavy crowd, Shilpika did not feel unsafe. At a community talk event in New Delhi recently, she told the audience, “I had a big fallout with my parents before I came. They were very concerned about my safety, as a woman travelling by herself on an exploratory journey in India. Not once, in the whole of 101 days did I feel particularly vulnerable in my own country, and that is a big testament to life in the villages, to our belief in what people are like and how generous and kind they are despite everything they do not have.”

Speaking to people and getting coverage in local media, she believes has made an impact, as is collaborating with charity organisation WaterAid on the mission. With the result of the mission in hand, she is tempted to go for another world record to keep the message of water pollution issues alive.

“My story doesn’t make a lot of sense to many people because I used to do something very different earlier, but it’s never too late to put your passion to action.”

“Everyone can do something, they just have to make their choice. People can find their own adventure and I encourage people to come and do it in India because so much stuff in India is unexplored, it’s so new and inspiring,” she said on a final note.

Note: The journey started off by a team of four was eventually finished by a team of two. Shilpika Gautam and Kumaran Mahalinga completed the mission.