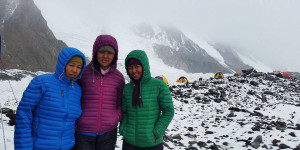 With some Himalayan summits to their credit, Maya Sherpa, Pasang Lhamu Sherpa Akita and Dawa Yangzum Sherpa are now the first women from their country to climb the Karakoram's treacherous peak.

On July 26, at precisely 3:35pm, three Nepalese mountain guides became the first women from their country to summit K2, the second highest peak in the world after Everest. In a Skype conversation, the three climbers talked to TOJ about their expedition.

The Outdoor Journal congratulates you on this achievement.
Can you tell us a little bit about yourselves?

Pasang (30): I’m a mountaineering instructor in Nepal, and I also guide and teach the subject in Nepal and USA. I have climbed a number of peaks, including Everest north side, Yala Peak (5520m), Ama Dablam (6856m) and am the first female ascent of Nangpai Gosum (7321m). I started climbing in 2001, did all my mountaineering and guide training courses from Nepal, and followed it up with a diploma in mountaineering from Ecole Nationale de Ski et d’Alpinisme (ENSA), France.  I have been working with Sherpa Adventure Gear since 2007.

Dawa (24): I’m an Ultra Marathon runner and a mountain climber. I have completed the Everest Sky Race and the Annapurna Mandala Trail. I’m the the 1st Nepali female to complete the climbing rescue ranger at Mt. Rainier (USA). Apart from Everest, Yala Peak(5520m), Ama Dablam(6856m) I have done my first ascent of Chiki Go (6225m) in Rolwaling Valley in 2010. I have been an athlete of Sherpa Adventure Gear since 2010.

Maya (35): I have been working as a climbing guide for 13 years after completing all my climbing and mountaineering training from Nepal Mountaineering Association (NMA). I have been involved in several expeditions such as Everest north & south side and am the first Nepalese woman to summit Pumori (7145m), Cho Oyu (8201m), Khan Tengri (7010m) and Baruntse (7125m).

Whose idea was this expedition?
Pasang: Maya and I thought of it in 2008, that we should someday climb K2. At that time it was just a thought. In 2014, Dawa came in and we decided to go as a team. We really wanted to raise the issue of environment and urge more mountaineers from our community to follow our footsteps. Being mountain guides, and housewives and environmentalists we felt that climbing the mountain for the cause of climate change was a good idea. Even those living in the  mountains don’t understand why glaciers are melting and why this is dangerous to all of us. So, we decided to embrace this as the main cause of our climb. Since we are mountaineers we decided to look for support among those connected with the sport. Brands like Black Diamond and Sherpa Adventure Gear backed us well. International Centre for Integrated Mountain Development (ICIMOD) helped us because we took up this issue.

You managed to summit such a hard peak in the first attempt. Would you say it was your toughest climb so far?
Maya: Yes, K2 is a tough mountain to climb. The weather is quite erratic and the route that we chose, Abruzzi Spur, despite being the most common route is very technical. Also, this was the first time we teamed up for an expedition as part of a team and we climbed as a team.

What was the most difficult part of the journey?
Pasang: It was tough all the way. Reaching  base camp itself is very difficult – we have to walk on the glacier at very low temperature. The climb is steep and has some very rough walls. But the weather was good. We are lucky. The weather usually is so bad that sometime people cannot even see K2 for the whole season. We went on July 2 and at that time  the weather was clear and after 17th  it started snowing and was windy. We went for the summit push on the 25th and just went on for 16 hours till we reached the peak.

How did you climb the Bottleneck?
Pasang: Everyone told us the Bottleneck was dangerous, and they are right. It is quite dangerous, because you have to traverse, and also because there is always a fear of avalanche. So on the summit day we went together with the rope-fixing team, and when we started we couldn’t locate the Bottleneck because it was very dark. Then after two hours we looked up and see that we are standing under the Bottleneck. All we could see was a very big piece of blue ice hanging above us. We were very afraid. We stayed under the Bottleneck for 2-3 hours because our team was fixing rope. Luckily there was no avalanche. Prayers were constant and finally we made it to the summit.

Many failed summits on K2 are due to the blizzard like conditions.  This time round, the the weather took your side. The window between 24 and 26 July was perfect weather wise and about 45 people attempted the peak at the same time! What was that like?
Dawa: Yeah! There were a lot of people around us! There were 6-7 groups above and below us – some Italian, some Portugese and a Pakistani group. Many of them were alpine climbers. We were quite surprised to see some of the climbers without oxygen tanks and food, wearing minimal clothing. It was quite interesting to see all that.

What kind of a support did you have when you climbed given that when at work you are a guide yourself?
Maya:  Kathmandu-based Seven Summits Trek was  the agency handling our expedition. We had three Sherpa guides with us who would break the trail and fix the rope.  This was our first expedition with sherpa support. Before this we climbed every mountain on our own. We used sherpa support this time because climbing K2 and this place requires much more manpower than other peaks. We were advised by mountaineers not to take any risk abd to keep safety first in mind always.

The National Geographic website ran an article disputing your claim about being an all-women team to summit K2, since you had three male Sherpas helping you. What is your opinion about this criticism?

Maya: We still claim that we were a one-women-team from Nepal to summit K2. Sherpas were a support staff and not to help us climb. And up there, those without sherpa support were using our fixed lines to climb.  Every alpinist has their own rope, but these mountaineers didn’t and they needed our ropes. We had three Sherpas, who were breaking trail and roping. And the same rope was being used by Italian and Polish alpinists. K2 is so dangerous and there is a dearth of manpower always on the high mountains.

What are your future plans?
Maya: No big plans yet, certainly not a mountain like K2.  We intend to continue climbing and want to take up the cause of environment on mountains and condition of glaciers. We also want to encourage women to take up mountaineering.