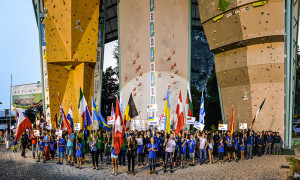 The young climbers will compete in all three disciplines – bouldering, lead and speed climbing.

The competitions begin tomorrow (28th August) and will go on till 6th September. Bangalore-based Lokesh Rajan (18), and Mumbai-based Siddhi Manerikar (20) and Akash Gaikwad (16) are competing in all three disciplines of the competition – bouldering, lead and speed climbing.

Rahul Pendse, a Mumbai-based climbing instructor who has trained Siddhi and Akash at the Arun Samant climbing wall in Mumbai is in Arco with the athletes for the IFSC World Youth Championship 2015.

“All three have been training for this competition for the past two months. For Siddhi, this is her fourth international competition, and Akash has participated in an Asian championship before this,” he told The Outdoor Journal over telephone.

“For Lokesh, this is his first international competition. He has been climbing for the past six years under instructor Keerthi Pais at the Equilibrium wall and Gethnaa in Bangalore, ” he said.

20-year old Siddhi sounded very excited about the IFSC World Youth Championship 2015. “I have been climbing since 8th grade, and have participated in three international and three Asian competitions before this. The wall looks great!” she said.

When asked about funding, Mr. Pendse explained that a Mumbai based trust (Prabodhankar Thakrey Krida Sankul) had sponsored travel and accommodation for Siddhi and Akash, while Lokesh banked on his family for support.