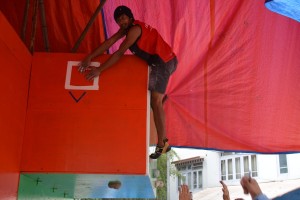 Maity powers his way to the top spot in the men's category to win the maiden bouldering competition held in the Himalayan state of Sikkim.

The Outdoor Journal athlete Sandeep Kumar Maity has won the first All India Open Artificial Bouldering Competition held in Sikkim on Thursday. Maity, a Delhi-based rock climber, won a trophy and cash prize of INR Rs 15,000 — the highest in India.
“I am very happy to have won this competition. I worked very hard for it. I thank all my supporters,” Maity told to The Outdoor Journal. He powered ahead of 15 other climbers to win the final. He successfully climbed two boulders and scored two tops in two attempts. The ranking was done according to the IFSC (International Federation of Sport Climbing) rules.

Maity’s score tied with Ajij Shaikh’s in the final. Judges declared him the winner unanimously based on his performance during the whole competition.
A total 74 climbers in four categories (Men, Women, Junior Boys and Junior Girls) participated in the competition organised by Sikkim Amateur Mountaineering Association (SAMA) and Sikkim Tourism Development Association (SADA) from May 13-14 at Palzor Stadium, Gangtok, Sikkim. 43 climbers in men’s, five in women’s, 17 in junior boys and nine in junior girls competed for the title.

“We want to promote artificial bouldering in Sikkim. We have good climbers here and organising such competitions will encourage them to compete at international level,” said Kunzang Gyatso Bhutia, President, SAMA.
After the competition ended, Maity also gave climbing tips and advices to the local amateur climbers.
The 22-year old has won other competitions in India, has sent several technical bouldering problems and participated in international events.