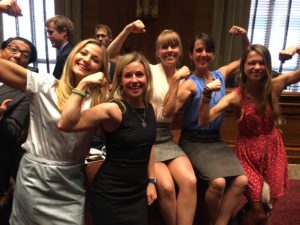 The battle over public lands rages on.

A recent Executive Order from President Trump calls for the review of 27 National Monuments and puts their future in jeopardy. But American climbers are speaking up. Last week, a handful of the best—from Tommy Caldwell to Alex Honnold, from Libby Sauter to Sasha DiGiulian—went to Washington, D.C. to take a stand.

After moves early in 2017 by the GOP-controlled Utah legislature and rhetoric from the Trump Administration foreshadowed a coming showdown over Bears Ears National Monument, a new Executive Order signed on April 26 further escalated the federal government’s efforts to dismantle protections of public land.  The outdoor recreation industry has taken decisive steps over the past several months intended to put pressure on lawmakers to reverse course. Its actions in response to this most recent development continue these efforts: On May 11, under the auspices of an initiative dubbed “Climb the Hill,” sponsored by the Access Fund and the American Alpine Club, a cohort of top American climbers—including Tommy Caldwell, Libby Sauter, Alex Honnold and Caroline Gleich—traveled to Washington, D.C. to meet with Congressmen and women and voice their concerns about the new Executive Order.

The Executive Order puts millions of acres previously designated as public land in 27 different National Monuments at risk of losing that distinction and the protections afforded them by it. Pursuant to the order, Secretary of the Interior Ryan Zinke will make recommendations to President Trump about whether to preserve each National Monument as is, remove its designation entirely, or adjust its borders as he sees fit.

American climbers Tommy Caldwell, Libby Sauter, Alex Honnold, Caroline Gleich, Sasha DiGiulian, Kai Lightner, Mikhail Martin, Quinn Brett and Shelma Jun joined around 40 other industry professionals and met with congresspeople from both parties at the Nation’s capital on May 11. The Outdoor Journal caught up with Caroline Gleich by phone and Libby Sauter by email, and also had a phone conversation with the Access Fund’s Executive Director, Brady Robinson.

Robinson said the goals of the event were two-fold: “One, to convey that climbing is important; that we’re not just a bunch of wackos and that we have views on some of the bigger issues of the day, including public lands issues. And two, to come away with better advocates speaking with the issues with more understanding than they would have otherwise. When you put people in a room, give them a briefing and send them out to advocate, they’ll learn and own those issues in a way they wouldn’t otherwise. After the event, we have articulate, passionate advocates to galvanize the community.”

In her email, Sauter, a prolific Yosemite climber and pediatric cardiac nurse, wrote that talking points varied depending on the previously articulated stances of the congressperson each Climb the Hill sub-delegation was meeting with, but general messaging focused around encouraging lawmakers to vote “in a pro-public land stance,” and expressing “support of the Antiquities Act as it currently stands as well as the existing borders of all National Monuments.”

Sauter said that reactions from lawmakers were mixed. “We heard it all. Some folks were very, very supportive and asking what more they could do to help the cause. Other offices would say ‘Yes, we agree public lands are a treasure. We just disagree on how they should be governed.’”

Ski-mountaineer Caroline Gleich, said she was heartened by inroads she had made since prior lobbying trips on behalf of the climate change movement. “Overall it was really positive,” she said. “One of my favorite moments from the trip was when we met with staffers from [Utah] Senator Orinn Hatch’s office. He’s incredibly right wing. I’d met with his same staffers before on an earlier trip and I thought that meeting was an absolute disaster. But one of the staffers started following me on Instagram after that trip, and so saw and followed all of my posts about fighting climate change.

“Change happens really slowly,” Gleich continued. “But I think it’s definitely happening, and events like these are a big part of the catalyst for that change.”

One of the first National Monuments to be reviewed by Secretary of the Interior Ryan Zinke is Bears Ears, in Utah. President Obama declared the area a National Monument on December 28, 2016, just before the end of his second term, thereby protecting roughly 1.3 million acres. As noted by the Southern Utah Wilderness Alliance (SUWA), Obama’s action marked “the first time that a president has responded to a formal request from sovereign Native American Tribes to use the Antiquities Act to protect public lands and cultural resources.”

Approximately 100,000 archaeological sites lie within the 1.3 million protected acres, in addition to popular climbing and recreational areas like Indian Creek. Sauter said, “I’ve heard Indian Creek referred to as the single-pitch crack climbing Mecca, Mecca being the most important religious site to all Muslims. That’s how inspiring and important this place is to us as climbers.” Gleich echoed Sauter’s sentiments: “Bears Ears is like nowhere else on the planet. It’s just a mind-blowing landscape. When you combine that with the cultural resources—the petroglyphs on the walls, the remote wilderness—it’s a transformative experience to spend time there.”

While Climb the Hill was a one-weekend event, its objectives are ongoing. Sauter spelled out all the various avenues open for constituents to put pressure on their elected representatives. “Currently we are in the 15 day comment period for Bears Ears,” Sauter explained. “We were told that originally composed, anecdotal stories are the most effective. As well, handwritten letters and Twitter are great and underused means to convey your support. To increase our power, we need individuals to call, write, email and tweet at Secretary Zinke. Then they should call the D.C. and local offices of their senators and representatives and urge them to voice their support of public lands to Secretary Zinke in the form of public letters or statements. Local groups should compose letters explaining why national monuments matter to their organizations. Local businesses should do the same. We must send group and individual correspondence. And then we must share with our friends and family and ask them to do the same!”

“It’s going to take a lot of continued follow-up,” Gleich said. “We’ll have to continue coming to the table, speaking up and presenting our viewpoints. There is still a lot of work to do.”

Robinson was quite happy with how Climb the Hill turned out. “I think this event was really valuable as a one-off, but I also think it will be more valuable over time as we continue to do things like this year after year into the future,” he said. “We’re not a flash in the pan. Climbers are here to stay and our opinions matter.” (Robinson was also excited about the welcome the climbers received: “How cool is it that Tim Kaine came out? Frankly, he was somewhat starstruck by Sasha.”)