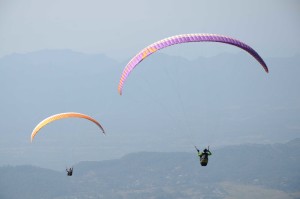 Over 100 paragliding pilots will take to the skies for the Airports Authority of India Paragliding World Cup 2015 trophy.

The wait is almost over for the first Paraglding World Cup 2015 to be held in India next month at the scenic hill station and gliding hub of of Bir-Billing in Himachal Pradesh.

As many as 130 pilots from over 35 countries including hosts India will battle it out in the skies during the competition that starts from October 24, announced  the Billing Paragliding Association (BPA) at a press conference on Monday in New Delhi.

The Airports Authority of India (AAI), a public sector body that overlooks India’s civil aviation infrastructure, is the main sponsor of the prestegious competition.

The Paragliding World Cup (PWC) 2015 trophy ( designed around the concept of Garuda, a Hindu mythological creature which is a symbol of impetuous violent force of speed and flight) and the mascot, which is the snow leopard, were also unveiled on Monday.

BPA president, Mr Sudhir Sharma said India’s role as hosts of the PWC was the outcome of “a dream bid” for the mega competition. Bir-Billing has been at the forefront of paragliding activities in India for many years and these days nearly 1000 pilots take off from the site every day.  The competition will also be the first-ever World Cup of Paragliding in South Asia. The World Cup will not only give a boost to the sport in India but will also improve the local economy and promote tourism in the state.”

The Airports Authority of India said it was a ‘clear as bell’ reason for them to come on board as the title and trophy sponsor for the PWC 2015.

AAI chairman Mr R K Srivastava said, “AAI had been on the lookout for a discipline which could be a perfect fit for its main task of providing infrastructure of flying. When the Paragliding World Cup came around we were extremely pleased to be associated with it. We plan to start with paragliding and take adventure sports in India to a new level.”

Mr Sharma said he was pleased with the world class infrastructure the Himachal Pradesh state government had developed for the World Cup, increasing the take-off capacity at the site to 45-50 pilots. He also added that roads and public amenities have also been upgraded to international standards for the arriving pilots and spectators of the global competition.

Over the seven days at the competition, a designated Task Committee will set a daily ‘task’ for the pilots. A specific course will be decided for the task and the pilots will be required to fly the entire course in the fastest time.The format  will be cross country/marathon flying, where the pilots will cover around 140 kms per day. PWC is an individual event where points will be awarded for various tasks and cumulative points will determine the winner.

The organizers confirmed participation of 130 pilots from over 35 countries. Top ranked para gliders, Vidic Jurij of Slovenia (Rank 2), Julien Wirtz of France (Rank 3) and Torsten Siegel of Germany (Rank 4) will be participating and competing at the World Cup amongst other top ranked pilots.

The Indian Contingent will be lead by Ajay Kumar and the rest of the team will comprise of Gurpreet Dhindsa, Jyoti Thakur, Arvind Pal, Prakash Chand, Gautam Nath and Sanjay Kumar

Dr Raj Kumar, the Technical Director for the World Cup said,  there will be trained rescue personnel, both for retrieval and medical emergencies. There are dedicated teams for retrieval at landing and take-off sites, as many as 80 vehicles with volunteers will be tracking the locations of the pilots once they are air- borne. Along the flight path there will be aid stations and two choppers will be on standby to evacuate a pilot in case of an emergency.

Bir-Billing is considered a ‘Paradise for paragliding’. Located at a distance of 500 kms from the national catipal Delhi. The villages of Bir and Billing are 14 kilometers apart in Himachal Pradesh. The site, Bir-Billing is almost naturally suited for the sport. The site offers as much as a 200 km expanse for flying.

Arvind Paul, ranked sixth in India said, ” Bir-Billing is an open valley where the flight paths are along the tree line. There are plenty of safe zones for emergency landing which make it the ideal location for paragliding”

Jyoti Thakur, an experienced paraglider of the Indian team told The Outdoor Journal,” Bir-Billing is one of the best sites in the world for paragliding as its easily accessible, there are plenty of landing sites which makes flying safer and during the day there are good thermals to gain height while flying. Along with all this there are roads along the flight path which can help in rescue and evacuation.”