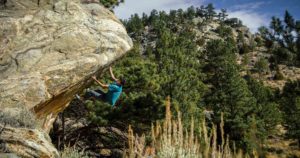 After a two year journey, climber and artist Paul Robinson is finally ready to unveil his latest passion-project: Uncharted Lines, a documentary where the world's best climbers seek and explore new lines across the globe.

Update: On January 25, 2017, Uncharted Lines premiered to a full, raucous house at the Boulder Theater, and reactions were ecstatic. Alex Kahn, the film’s co-director, producer, writer, cinematographer and editor, told The Outdoor Journal, “The amount of roles I took on provided more stress than I’ve ever dealt with in my life and seeing it in the theatre was also my proudest moment.” To see more of Kahn’s work, visit asinspiredmedia.com.

When Uncharted Lines premieres in Boulder, CO on Wednesday, January 25th, it will mark the end of a nearly two year journey for Paul Robinson. From Zimbabwe to the Wild West of the U.S., from Siberia to the Southeastern U.S. to Spain, Robinson and Alex Kahn crisscrossed the globe on a mission to make a new kind of climbing film, recruiting the world’s best—Chris Sharma, Daniel Woods and Jimmy Webb among them—to help create a story about developing new bouldering areas.

When we meet for coffee, less than a week before the film’s premiere. He jogs through the door at 9:01 am, looking frazzled. Paul tells me that he’s still adding the finishing touches to the movie. “ I’m like 99% done,” he says. “Gonna be working on it up to the last minute to make it as good as it can be. I’ll cut myself off on Monday.”

And it’s understandable that he is reluctant to call it done. When he first conceived of the project, it was something of a pipedream. “I don’t think many people really understand what it takes to find a new area, establish new climbs, and create something the climbing community in the future will be able to use for generations to come,” Paul says. With funding from a few key sponsors, but much of the project bankrolled by himself and his other friends featured in the film, Paul spent over a year filming and over six months editing, with Kahn, who was also a director, producer, writer, cinematographer, editor. And now, finally, it’s go-time.

In September 2015, Paul traveled into the frigid landscapes of Siberia. He had seen pictures on Google Earth of what looked like amazing, untouched boulder fields. After a six hour flight from Moscow to a single-gate airport on the Mongolian border, he arrived in an area where no one spoke English, there were no rental car agencies, no real hotels, and no easy access to go to shoot locales.

Things didn’t work out well in Siberia. “It was a failed mission,” he says. “We got snowed out, and couldn’t really do much climbing.”

And this is how Uncharted Lines begins: Amidst the cold and discouraging mood of a lackluster trip to Siberia. But it’s a conscious decision on Paul’s part to open the film like this: “You’re inevitably going to have failures along the way,” when searching for new boulders he says. It’s just part of the process.

Robinson, 29, has been a top climber for over a decade at this point. Tall and lanky with a mop of brown hair atop his head, he has established some of the hardest boulder problems in the world, like Lucid Dreaming (8C/V15) at the Buttermilks in Bishop, CA, and climbed routes like Jaws II (9a+/5.15a) in Rumney, NH.

While putting up first ascents is a creative outlet for him, he is an artist in the traditional sense as well. Paul studied painting at Colorado University, Boulder. His paintings have a distinctly geometric quality to them, full of straight lines, solid colours and sharp angles.

After graduating he found that he didn’t have as much time to paint and draw, what with traveling around the world to climb. So he began filming, stitching together frames and scenes, painting stories with a camera rather than a brush. “I got my first good camera in 2009,” he says, “and just started taking photos. I was hanging with friends all the time climbing and I was like ‘Why don’t we just make a movie?’”

He made several short, low-budget films at first. Then in 2012, he undertook a bigger film project, titled Chasing Winter, documenting his, Carlo Traversi and Ashima Shiraishi’s search for new boulders in South Africa.

“Uncharted Lines plays in chronological order, but the first area that I actually visited was Chimanimani in Zimbabwe. I went on a recon mission in 2015 to make sure there was actually worthwhile climbing there,” Paul says. “I was absolutely blown away. It opened my eyes to what else could be out there.”

Paul returned to Chimanimani National Park a second time in 2016 with Jimmy Webb, this time to film. And there, they had the “best two weeks of our lives.”

They would go hiking each day, sometimes finding entire fields of perfect blocks, other times not finding much. But part of the area’s appeal was the hidden gems that would reveal themselves when least expected. “I remember one day we were hiking through this valley, not finding much,” he says. “We were assuming we’d get to the top and then hike back to our hut. We crested a hill, and there was a huge clearing, about the length of a football field, and right in the middle was this perfect 50-foot-tall boulder, overhanging on all sides.”

Giddy about the possibilities, Paul and Jimmy ran up to it and began scouting potential routes. One line in particular caught Paul’s eye. It went right up the tallest 50-foot section of the boulder. “I was kind of nervous,” Paul says. “Wasn’t sure it would even be possible.” After rapping from the top to clean it up and inspect it, he was once again in awe: “It had just enough holds to make it possible without being insanely dangerous.”

Paul laced up his shoes and sent the line. He called it The Elaborate Ruse (8A/V11) and despite having to pull scary V3 moves high off the deck, he climbed it with only three pads beneath him. “Once you’re at about the twenty foot mark it’s pretty much a no fall zone,” he says, meaning a fall would likely result in severe injury, “so the pads don’t matter much anyway.”

Zimbabwe is easily the area in Uncharted Lines that Robinson is most excited about showing people and returning to in the future: “It’s absolutely insane there. If people start going, it will be in the top five bouldering destinations in the world.”

An independent production like Uncharted Lines was a daunting undertaking for a relatively inexperienced filmmaker like Paul.

“All professional climbers like to have their own agendas,” he says. Trying to work around the hectic, ever-changing schedules of superstars like Daniel Woods and Chris Sharma was like trying to herd cats. Even when schedules lined up, sometimes actual climbing time was tight.

Paul spent a month in Spain with the intention of filming with Sharma. There was a boulder field tucked right between Albarracin and Catalunya with virtually no development that they wanted to check out together. “Untouched, perfect black sandstone,” Paul says.

But Sharma is “extremely busy,” Paul explains, and was only able to come and shoot for two days. “Those days were the most stressful I’ve ever had,” he says. “I had to take on the roles of showing him around the boulders, filming as much as possible, running around clearing shots and setting up the tripod. It was crazy.” But watching Uncharted Lines, you’d never guess that Sharma was there only briefly. “We got tons of great stuff from those 30 hours of footage,” Paul says.

The initial vision for the film was to travel the world to remote destinations in search of new rock. As the project evolved, though, Robinson decided that it made sense to include already-established areas, like those in Chattanooga and the Western U.S.

“A lot of people can’t really empathize with going to Zimbabwe or Siberia because it’s so far-fetched for a normal climber,” Paul says. “So we play with the idea that there is new stuff even in your backyard. If you look hard enough you’ll find something. You don’t have to go to the farthest sections of the world to find new lines. If you drive ten minutes down the road you might find something new.”

One of those new lines, featured in the film, is Creature From the Black Lagoon, an 8C+/V16 put up by Daniel Woods in Upper Chaos Canyon, Rocky Mountain National Park, CO, and likely one of the hardest boulder problems in the world.

Paul says, “Daniel has always been pushing himself to do the hardest first ascents that are humanly possible, whether in new or established areas.” In the beginning, when Robinson only wanted to film in new destinations that hadn’t been seen before, footage of a climb like Creature From the Black Lagoon wouldn’t have made the cut. But Paul realized that, near or far, establishing new lines requires the same process, drive and thoroughness in the end.

“Watching Daniel’s path that he took to climb that boulder, I really wanted to show it to people,” he says. “The elation that Daniel had after accomplishing something that took him so long was really amazing. I think people will really understand the process that he went through.”

Finally, after two years, Paul is just about ready to reveal his creation. And he’s extremely proud of the (very nearly) finished product.

Just this past week, Paul hiked out with American boulderer Meagan Martin to a new problem in Colorado, Belly of the Beast (7C+/V10). She had tried the climb in October and November but was unable to finish it off. Paul, still looking for a few key pieces to finish the film, convinced her to hike up to the problem to give it one more go. “We went out there and everything was covered in snow,” he says. “We shovelled snow, dried holds, and—like a champion—Meagan sent it. When she topped out she was so excited, and I remember saying ‘This movie is done!’”

Filming in Siberia at the start of his journey, Paul was left wondering how everything would turn out. Snow, ice and cold conspired against him. A year and a half later, in the snow, ice and cold, watching Meghan send Belly of the Beast, he couldn’t wait to finish editing the footage and share his passion project with the world.

“I’m extremely nervous,” he says to me towards the end of our interview in the coffee shop. He looks a bit tired with his unkempt hair and a crinkled, striped blue and white shirt; I can imagine him editing through the night, trying to get each scene just right. But despite the nerves, smiles and enthusiasm betray an even stronger excitement. “I want to fill the house,” he says. “I want people to see this film. If I could I’d put it out for free, so more people would see it. If we have a packed house on Wednesday evening, I’m going to be the happiest person alive.”