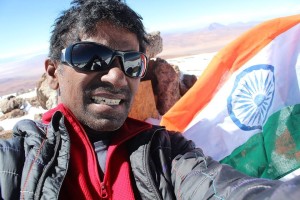 Thousands of people turned up for the burial of Babu in his hometown in South India.

The local government had a 21-gun salute in his honour.

Indian mountaineer Malli Mastan Babu who died in the Andes recently was laid to rest in his village on Saturday in the presence thousands of people. Babu, the fastest Indian to climb the seven summits, was given a state funeral and a 21-gun salute before being buried in his family field in Gandhi Jana Sangham village, 38 kms from Nellore.

Union Parliamentary Affairs Minister Venkaiah Naidu was present on the occasion along with other dignitaries and several people who knew the reclusive climber. Hundreds of others who had previously not heard of him also turned up at the venue after his disappearance followed by his death made national headlines in print and on TV. Mr Naidu, who hails from the same district as Babu, had earlier intervened to ensure that the Indian government take notice of his disappearance and help in the search and rescue.

The minister said the government would consider setting up adventure clubs and give away adventure awards in the name of the late mountaineer.

Babu’s friend Satyam Bheemasaretti told The Outdoor Journal over phone,”The funeral was attended by close to 5,000 people including hundreds of his school and college friends. Many people who did not know of him till about a few weeks ago also turned up to pay their last respects.”

Babu’s mortal remains were kept in a glass coffin and while some people offered floral tributes and wreaths, many of his friends broke down.

Babu was found dead in the Andes last month. His embalmed body was brought down to Delhi, India on 24th April morning from Argentina. It was later flown to Chennai same day in an Air India flight and then transferred to his home town.