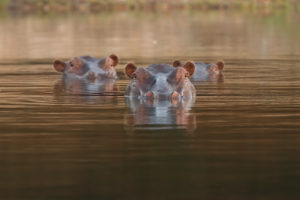 In a shocking move, the Zambian government has apparently given a South African trophy hunting company an exclusive license to 'cull' this threatened species.

There is an urgent situation arising in Zambia’s South Luangwa National Park and surrounds.

In a shocking move the Zambian Government have apparently overturned a 2016 decision to suspend a proposed hippo ‘cull’ and South African hunters have allegedly been given the go-ahead to slaughter up to 2,000 hippos in the area. Currently on the ‘Red List’ of threatened species, and categorised as vulnerable by the International Union for the Conservation of Nature (IUCN).

A South African professional trophy hunting company, Umlilo Safaris, has been awarded a hunting license allowing for up to 2,000 hippos to be killed over a 5 year period.

“Culling of wildlife is not an option. It is a primitive wildlife conservation strategy…”

These licenses have been granted under the guise of ‘animal management’. The Umlilo Safaris company are already offering a five day ‘hippo management hunt’ in the Luangwa Valley, and according to a post on africahunting.com and the company’s own Facebook page, they say their clients can shoot five hippos per trip and keep the animals tusks. Apparently the hunts will run from June until the end of October and are due to continue until 2022 The Department of National Parks has argued that a ‘cull’ in the Luangwa River region, is a bid to control overpopulation and stop the spread of anthrax. A statement by Zambia’s Ministry of Tourism said the culling was to maintain a “suitable habitat for aquatic species and wildlife in general… the hippos are causing considerable damage to the riverbanks and continue to threaten the sustainability of the river system”. However the killing has been labelled barbaric by conservationists, who are citing no scientific basis for the hippo hunt.

Zambia initially suspended a planned cull in 2016 following pressure from activists, but Born Free Foundation has accused the government of “secretly” overturning the decision, with no consultation process. Born Free says that no information has been provided to show river levels or water flow in the Luangwa River are abnormally low, and that there is no scientific evidence to show that a hippo cull would prevent an outbreak of anthrax. Will Travers, chief executive of Born Free, believes that the government has failed to provide sufficient evidence to demonstrate any overpopulation of hippos in the Luangwa River, or to make public any data that justifies the cull.

“They are, apparently, using the same flawed rationale for the slaughter as last time – a preventative measure to avoid a future outbreak of anthrax, combined with an assertion that low rainfall will exacerbate the situation… They also appear not to have informed key stakeholders in the Luangwa Valley… The negative consequences for thousands of hippo and Zambia’s reputation as a wildlife tourism destination cannot be underestimated.”

In a statement to Zambia’s Lusaka Times, Peter Sinkamba, President of the Zambian Green Party, said “Culling of wildlife is not an option. It is a primitive wildlife conservation strategy… What is more appalling is that the Luangwa Valley is not overpopulated as they claim. The hippo population in that conservation area has dwindled by about 14-20% in the last 20 years, motivated by mainly poor conservation policies, strategies and allocation of financial and human resources. The culling policy is motivated by pure greed.”

Richard Kock, professor of wildlife health at the Royal Veterinary College, speaking to speaking to UK’s The Independent newspaper, believes the Zambian government have yet to provide adequate data to justify the ‘cull’. “There’s no doubt that hippos can build up numbers until there really are probably too many for the ecosystem… and so I think anthrax may well be a factor in controlling their populations, and it may benefit the environment because they will consume large quantities of herbage, and obviously that will affect other species… I’m also very sensitive to the fact people use these things as excuses for nefarious behaviour… I would say you need good data and you need good evidence and it should be the scientific authorities who should back up any sort of criteria on culling.”

“quite clearly a money making venture on the part of the people who signed the initial deal.”

They believe that the reason the hunting contract was so attractive for Umlilo to run their hippo hunts, is that the area covered by their license is in the main tourism area of South Luangwa, an area easily accessed by air and road for clients to come in and shoot, and to get the hippo meat out. But operators point out this ease of access and convenience is due to photographic tourism investment and development created by safari lodges, operators, NGOs, charities and other stakeholders. “Now these people are going to come and take advantage of that, and in the process threaten the survival of the very industry that created the nice environment for them! If photo tourists see this they will boycott the area and our businesses… leaving the people and wildlife they support under threat.” Operators also question why, of the approximately US$3,000,000 raised annually by the South Luangwa National Park, only a tiny fraction ($60,000 in 2017) is sent back to the park to facilitate park management and infrastructure.

Another issue raised by the ground operators is how the hunters will cure the hippo meat. This apparently will be done by drying it using the traditional method of fires made with mopane wood. Trees that it would appear, Umlilo have been given permission to fell around their hunting camp. Operators say “we have a continuous battle here trying to save the forests and habitat that supports such amazing wildlife and in turn earns the government around US$3m a year in revenues from this amazing national park. Local people are not allowed to cut these trees, why should this company? And all apparently without having to buy a licence from the Forestry Department or Community Resource Board.”

Operators say… “If culling for meat and revenue could be done without affecting that product and the revenues it earns, and the hippo population would not be jeopardised, many of us here would support it, as it could provide protein and revenues for local people… and that would help to secure the future of conservation. But the reality is that this ‘culling’ will impact on the photo safari business and tourism as a whole to Zambia.” They go on to say “you cannot have unskilled trophy hunters shooting hippo in the river opposite the busiest game viewing area in Zambia without it impacting the industry and park earnings. For them to shoot two hippos a day every day for 5 months is going to be carnage. If you had professional culling companies, shooting at night with silenced rifles and harvesting the hippos from dry land, then maybe. But killing a hippo in the water, (which we have evidence often takes 6 or 7 shots) then letting it sink, waiting for it to float to the surface, hooking it, dragging it to the shore line, then butchering it and drying it on drying racks, is going to have a massive impact.”

Safari operators also worry that a by-product of the cull will be that “predators will be dragged out of the park by the smell of dead hippo, and become ‘fair game’ for the other hunting company who have the concession that Umlilo are operating in. These legally chosen concessionaires are also not happy to have these fly by night, canned hunters, operating in what they were promised was their exclusive hunting area. The real hunters have the good sense to stay away from the photo tourism areas most of the time, and conduct their hunts away from the river and the park.” In fact tender process for allocation of the license to Umlilo appears to be less than transparent, operators say it was a “behind closed doors deal,” and are questioning why if a licence was going to be granted it wasn’t offered to one of the existing hunters in the area.

Culling does not work as a population control. In fact evidence suggest that culling actually stimulates population growth. Indeed in a 2012 Research Paper by Chansa Chomba for the Zambian Wildlife Authority and Zambian Department of Parks and Wildlife entitled “Factors affecting the Luangwa (Zambia) hippo population dynamics within its carrying capacity band – Insights for better management”, the author states “This study has established that along the 165 km stretch of the Luangwa River, Zambia, the amount of food produced (grass biomass) regulated hippo population size within the carrying capacity band” he went on to say “The amount of food (biomass) influenced the population size and density within the carrying capacity band” and that “Culling, trophy hunting, problem animal control, poaching, and disease, did not significantly affect population size and density.” Chomba’s conclusion in his study was that “In fact it has been documented that the act of culling removes excess males and frees resources for the remaining female individuals, leading to increased births and facilitating rather than suppressing population growth rate.” Whilst this report could be construed as an argument to support the ‘cull’, by claiming it will not negatively affect numbers, it does also clearly indicate that a ‘cull’ will be of no effect in population control, which contradicts the Zambian Government stance on the matter.

Clearly this is an emotive issue, but the fact remains that on the International Union for the Conservation of Nature’s (IUCN) ‘Red List’ of threatened species, which is reknowned as the world’s most comprehensive inventory of biological species, hippos are listed as “vulnerable” with an estimated population of just 115-130 000 animals and with population declines continuing to be reported. Whatever steps are taken next need to be well thought through, transparent and with reliable scientific data to back up any decisions made. In Zambia’s South Luangwa National Park a hippo stands on the water’s edge, with a poacher’s snare cutting deep into its neck. In normal situation like this, a task force would mobilise to rescue the hippo, dart it, remove the snare and give it the medical attention it needs to aid recovery, but as one operator says… “It is ludicrous to dart a snared hippo when the government is planning on shooting 2,000, the cost of darting and the risk is extremely high.”

What can you do? If you’re against this cull, sign the petition now.

In issue 14 of The Outdoor Journal, we reviewed South Luangwa National Park as a safari destination. Subscribe to the magazine now.