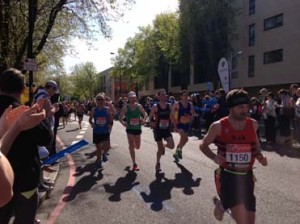 The London Eye, Big Ben, Thames are all key tourist attractions in the bustling metropolis. Indian athlete Sunita saw them all but not from the seat of a tour bus but by running the world famous marathon.

After running 13 full marathons in as many destinations last year and a couple of Ultras, I looked forward to conquering a World Major course at London. The Active Holiday Company, the official tour operator for India had guaranteed entries with hotel stay and that was the first step in making the impossible possible. The Virgin Money London Marathon closes for registration in record time of a few hours and within that time they are flooded with 125,000 entries. Getting through the ballot for International runners is as good as impossible and I know many who have tried for years without success.

To me, the biggest benefit of travelling this way for the race was the opportunity to meet other inspirational runners from across the country. The city of London is beautiful and we stayed at a centrally located hotel right next to the London Eye and walking distance from the Big Ben. If at all there is any regret, it is that of not spending enough time looking around the historic city.

My goal for the Virgin Money London Marathon was to beat my personal best timing of 4:51:04 and ever since the day I had received my entry confirmation, I had been working hard towards this. Unfortunately, I
was picked up a viral bug just before my departure to London. Till the day before the race, I was confused about whether I should run or drop out. This is particularly tempting because London Marathon allows you the opportunity to carry forward your entry for one year on account of illness. Even after I got to London I spent most of my time resting (and that’s the main reason I got to see so little of the metropolis). But, though my body was weak my mind wasn’t. Come race day I was in my running gear walking to Waterloo station to take our train to Greenwich the start point of the race.

The holding area of the race is in fact the start of one big party as one can see from the electric atmosphere throughout the course on this April Sunday, when over a million people come out on the street to cheer runners. That itself is a very good reason for this marathon to be as iconic as it is. But from the sights one passes throughout the course to the organization, the facilities en-route, for attention to detail – the race it deserves the status it has.

Unfortunately, given the condition of my body, the race was a struggle for me. It didn’t help that of all the days that we spent in London, this was the hottest of them all. The race starts at 10 AM and for a 4 or 5 hour marathoner was dealing with the sun for a good part of the race. The thought of dropping out from the race crossed my mind more than once. If there is anything that kept me going it was the cheering crowd throughout the 42.2 km and the infectious energy levels of other runners. The London Marathon is a crowded course and whether you are aiming for a sub 3 hours or likely to finish in 6 hours, you are far from alone.

I completed the run in 5:33 – with a great difficulty I might add. I was so disappointed with my performance that I had tears during and after the race. Running the London marathon made me realize how disheartening it is to having expectations and not meeting them. Then, I figured that we all have good days and bad days and that we should be able to take both gracefully. So, London Marathon taught me something new, it humbled me. And, let’s not forget, I ran the same course that Mo Farah, Wilson Kipsang, Tirunesh Dibaba and many other elites ran – on the very same day!

I was happy for all our Indian runner mates – the one who ran his maiden marathon in an amazing sub 3:10 minute timing, the ones who hit their PB, the ones who got out and ran their hearts out and the ones who enjoyed every moment of the 42.2km journey on a World Major course.

They talk about “mind over body”,  “if you can’t run with your legs, run with your heart”, but, I say: “when both mind and body give up, run with your determination, will-power, perseverance and stubbornness’ – that’s exactly what I did.

I remember during the race, having a thought that many of us Marathoners have from time to time: that I would quit running marathons after this. And, here I am, a week after the London Marathon, getting ready to run 112 km multi-day race in Himalayas next week!

Sunita Tummalapalli is a Reebok certified fitness instructor and a founding member of WIN (Women in Network), a non-profit organization that helps women and children from underprivileged section in the areas of Health, Hygiene and Education. She is an active member and Joint Secretary of the Hyderabad Runner Club and has completed over two dozen full marathons including two ultra-marathons. She ran 13 full marathons in 2013 in as many destinations. She enjoys trekking, photography, Western and Indian classical dance.  Ms. Tummalapalli is married to Rao for 25 years and she has three children, Suhas (20), Nikhil (18) and Tanvi (10).

The Virgin Money London Marathon is one of the six World Marathon Majors. Since it was founded in 1981, by the former Olympic champion and journalist Chris Brasher and Welsh athlete John Disley, hundreds and thousands of runners have run on this course of 42.195 kms, set largely along River Thames. The 34th London Marathon took place on 13 April 2014 and attracted over 35,000 runners. The next London Marathon is scheduled for April 26.