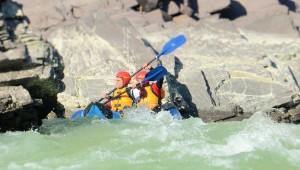 What are the charges against rafting camps on the Ganges? Part 2 of 4

While the verdict on the future of river rafting camps on the Ganges is awaited, we explore the petition and the allegations.

River rafting camps on the Ganges in Uttarakhand in north India have come under fire after a petition filed by a non-profit alleged they cause ecological damage before the National Green Tribunal* (NGT), India’s top environmental court.

The stretch from Kaudiyala to Rishikesh in Uttarakhand is a popular area for setting up beach camps during the whitewater rafting season, from September to June. As explained in the previous story, rampant growth of this activity, with many riverside camps on a relatively small stretch has raised a few obstacles for the adventure activity.

What the petition and the NGO say

According to the petition, directed at Uttarakhand’s state government, its forest department and the central Ministry of Forest and Environment (MoEF) ‘the haphazard and unregulated licensing of river rafting camps along the Ganges from Shivpuri to Rishikesh by state agencies has led to immense pressure on the river, that it is on ‘first-come-first serve basis and without any consideration for the carrying capacity of the river.’

It further expressed concern over ‘flattening of land’ and pollution caused by the temporary campsites because of ‘improper sewage disposal, lack of sanitation and a general pollution caused by drinking alcohol, fire crackers etc.’ It also stated that the presence of camps reflected negatively on the ecology and wildlife of the area.

It demands two actionable measures simultaneously – a halt on fresh licensing and a halt on operations of current river rafting camps.

Vikrant Tongad, founder of SAFE (Social Action for Forest and Environment), the petitioner NGO told The Outdoor Journal, “Officially, there are around 40-45 camps, but according to the information I have received from local sources, there are 330. There are more camps than the capacity, this leads to depleted forest cover and other issues.”

“I have been hearing about issues on the Ganga for a long time from my friends now. I know people in nearby ashrams are also tired of them. They are present right opposite the ashram,” he said.

An article by India’s national daily Times of India last week reported a Vishwa Hindu Parishad (VHP) leader, a Hindu nationalist body said that people “mingle, drink and indulge in objectionable activities on the banks of the holy river, where sadhus and sants (saints) gather to meditate”.

Government’s response to NGT so far

The petition was first heard on 31st March, in which the NGT demanded a response from the MoEF while the Uttarakhand state government assured the NGT that no fresh rafting license would be issued. In the second hearing on 6th May, the Indian Association of Professional Rafting (IAPRO), an association of rafting operators registered under the Societies Registration Act of 1860, in 1990 was allowed to implead their case.

“We are seeking clarity over this petition,” said Kiran Bhatt, president of IAPRO.

“The petition has alleged flouting of environmental guidelines by rafting operators on the basis of a rapid impact assessment report conducted by the The Wildlife Institute of India in July, 2010 which assessment was carried out in a hurried and haphazard manner in a single day. The petition does not reveal which specific operators are allegedly violating the rules and has painted them all with one brush,” Jiten Mehra, advocate for IAPRO told The Outdoor Journal over telephone.

The Wildlife Institute of India is an autonomous institution under the Ministry of Environment and Forests, Government of India. In June 2010, it published a report, called A Rapid Impact Assessment of the Rafting Camps along the Kaudiyala-Rishikesh stretch of River Ganges, Uttarakhand. The report is based on a one-day reconnaissance of 34 camping sites on the 36 km stretch between Rishikesh and Kaudiyala on 11th May 2010. As given in the report, ‘the entire stretch was surveyed while moving from downstream to upstream of the river Ganga on a jet boat,’ and observations were made based on ‘relative sizes, natural setting and habitat features, presence and absence of wild animals.’

The report suggested that out of the 34 camp sites reviewed, 13 were not suitable for camping.

“IAPRO stands strictly against the illegal river rafting camps. We have been requesting the government of Uttarakhand to continue to adhere to the GO issued by the then Uttar Pradesh govt in 1993, to stop indiscriminate licensing of the rafting camps, to maintain a respectable distance between camps. It puts the whole ecology of the area at risk,” Kiran Bhatt, president of IAPRO told The Outdoor Journal

In 1993, the then government of Uttar Pradesh issued a Government Order (GO), allowing rafting and camping activity by the Ganges subject to conditions, including allowing setting up tents in specific areas, prohibition of fire wood, setting up dry pits away from the river bed, no hunting or killing fish etc. The IAPRO says that these conditions were based on their recommendations, which they sent to the govt the previous  year.

In 1998, the Ministry of Environment and Forest (MoEF) recognized camping and rafting on the Ganges as an ecotourism activity.

IAPRO launched an online petition earlier this week, where they clearly defend their stance against the NGO’s allegation, saying that “river rafting section on the Ganga is the only eco-tourism activity being conducted amidst the hydro-project centric engineering activity that dots the State of Uttarakhand.”

IAPRO’s online petition also states, “Earlier, rafting permissions were given to those entrepreneurs who had personal skills of guiding, know – how and experience in outdoor recreation, and who possessed rafts. Later rafting permits were handed out to anyone who had the wherewithal to set up camp and buy the equipment and hire the guides, to a stage where ad-hoc licenses began being issued by area gram sabhas, Forest Departments and even the local District Magistrate. We recognize this as the first debilitating step of moving from Eco-Tourism towards Mass Tourism.”

Moreover, there have been reports of ‘illegal’ rafting operators and camps based on the popular stretch in the past.

There is a clear discrepancy of number of camping operators on the stretch.

Incidentally, a different petition filed by the Indian Counsel for Environment Legal Action in January this year demanded closure of all polluting units contaminating the Ganges, with a specific action point for rafting camps that ‘the dry pit toilet arrangement of river rafting camps should be shifted from river sand bed to another place (beyond the high flood area), otherwise, during the flood season, all dry pit toilets will be washed out by the river, resulting in polluting the Ganges.’

In the next part of the series, we explore the politics of licenses for rafting camps.