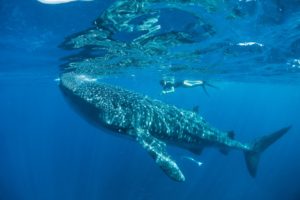 What Can I Do For International Whale Shark Day?

On International Whale Shark Day, find out how you can protect the gentle giants of the ocean.

Sharks are one of the oldest species of the animal kingdom. They predate dinosaurs by about 200 million years and have survived five events of mass extinction.

Yet, in the last two generations alone, their population has been slashed by almost 90%.

Of the 440 species of sharks in the world, 11 are critically endangered, 15 endangered and 48 species are listed vulnerable.

Human activity is the biggest threat to all shark species – from the smallest, the Panama ghost catshark to the largest, the whale shark. Poaching, ship collisions, by catch, sonar waves, environmental degradation, plastic pollutants are some of the biggest contributors to the decrease in the population of the shark species.

The whale shark (Rhincodon typus) is the largest living fish in the world. They survive in tropical and warm temperate waters, mostly in the Atlantic and Indo-Pacific oceans. In a recent IUCN Red List survey, the whale shark was declared an Endangered specie. In the last 75 years, their population has declined by over 50%.

The Outdoor Journal spoke to some of the most active and influential marine conservationists in the space to find out what needs to be done to reduce the decline of these incredible, vulnerable giants of the ocean.

1. Say NO to shark fin soup and shark products

One of the biggest contributors for the decline of shark species, including the whale shark is shark finning. Shark finning is the removal and deligening of the shark fins, and leaving the remainder of the shark in the oceans. The sharks return to the ocean alive and without fins, unable to swim and breathe, and eventually sink to the seabed, suffocating to death.

Captain Paul Watson of Sea Shepherd Conservation Society told The Outdoor Journal, “they are being slaughtered in unprecedented numbers, primarily for their fins to feed the insatiable Asian market for a piece of flesh and cartilage that has absolutely no nutritional value.”

The shark fin soup is a popular dish in South-East Asia – especially China and its territories. According to marine conservationist and shark activist Ocean Ramsey, approximately 11,000 sharks are caught for fin trade every hour. Although countries like Palau, Bahamas, Cook Islands, Kiribati, Tokelau Islands and more have banned shark finning, a larger and stricter regulation is required.

Travelers exploring areas where shark fin soup is available, should avoid it at all costs. It kills some of the most important species of the marine ecosystem and has absolutely no nutritional value.

Plastic pollutants are a big problem in oceans worldwide. According to conservation photographer and marine biologist Brett Monroe Garner, “Whale sharks feed at the surface where they filter large quantities of water through their 1.5m mouths, so surely they are sucking in and ingesting plastics floating about. Generally when we see animals ingesting plastics we find those plastics get lodged in their digestive tract, reducing their ability to eat and at times starving the animal.”

Pierre-Yves Cousteau of Cousteau Divers, environmentalist and youngest son of the legendary Jacques Cousteau adds to this, in an email to The Outdoor Journal, “Plastic cups, cutlery, bags… Even synthetic clothing fibers have a large impact when they are washed and frey. All this plastic we use breaks down to molecular levels and enters the food chain, eventually ending up in our dinner plates!”

We must curb the use of plastics, especially when travelling to remote coastal areas. Lack of infrastructure in those regions results in the disposal of waste in the waters.

3. Think about your consumption choices

“Within this category, the best thing you can do for our planet is to reduce your meat intake. All kinds of meat. Fish specifically if you care about the ocean, but even beef will have a huge impact on climate change and therefore, the ocean,” Mr. Cousteau explained to The Outdoor Journal

Mr. Garner explains that a great way to to support whale shark conservation is to engage in ecotourism as it creates a monetary incentive to protect the sharks.

“Poachers aren’t motivated by an evil desire to destroy, often they are just local fishermen trying to support their families. If they are desperate, and there is a market for whale shark fins, oil, and meat they will tap into it. But when the incentives are changed and it becomes more valuable to have the sharks, those sharks will be protected,” he told The Outdoor Journal in an email.

“Pick smaller, lesser known sites to visit so you support ecotourism growth and avoid putting an undue strain on the sharks as part of a huge crowd,” he said.

Marine biologist Mahima Jaini added an important point, “When you go diving to these areas, please don’t go looking to touch or ride on these creatures. Most of the fish species have a mucous coat on their skin that protects them from bacteria. Touching them removes that covering.”

The Outdoor Journal’s founders Apoorva Prasad and Lorenzo Fornari visited Donsol, a diving site in Philippines in 2011, and were spell-bound by the experience of swimming with the whale sharks.

“I can’t be the only one who has had or wants to have experiences and sensations like these. In fact I know I’m not,” Mr Fornari, an avid diver, said.

“The minuscule fishing village of Donsol barely had 800 tourists per year in the late 90’s to more than 20k in 2009. Almost uniquely to all the Philippines, in 1998 the area became a sanctuary and whale sharks were protected. Tourists started arriving and the concerned fishermen started seeing benefits almost right away. It is now the region’s main source of revenue.”

“The whale sharks will continue to migrate there if the water is clean because the algae they eat only grows if the water is clean. So the locals also have to keep the land clean, specifically the rivers that come from inland as well as sewage and waste. It is teaching people that the environment is connected and actions have consequences,” he explained.

“Donsol is one of the best marine environmental cases of the country, but the Philippines has well over 7000 islands. There is still much to be done.”

Doing your research and supporting a good non-profit in any way possible is one of the best ways to support marine conservation.

From direct action groups such as Sea Shepherd Conservation Society to diving communities such as Cousteau Divers, to education and training outfits such as One Ocean, there is something out there for every concerned citizen of the world.

He went on to add, “Our anti-poaching campaigns have shut down high seas poachers, educated, increased awareness and focused public opinion. We have shut down shark killing programs in the French courts to stop the slaughter of Bull sharks and we are a leading opponent to shark culling efforts in Australia. This summer we arrested a Spanish ship off West Africa with illegally finned sharks on board and we have busted shark poachers in the waters of the Galapagos, Gabon, Cape Verde, Italy, France and Panama. Our efforts in Hong Kong and Costa Rica have documented and exposed the illicit trade in fins.”

He concluded by saying, “The primary threat to sharks is simply human ignorance, apathy and fear. The reality is that we have more to fear from an Ocean without sharks than with an Ocean with sharks.”