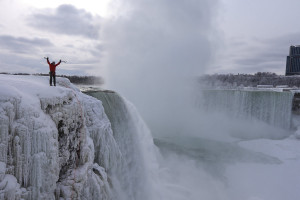 The Niagara Falls has been known for attempts to descend it.

But last week, one of the world’s top all-round adventure athletes Will Gadd ice-climbed up the world’s most famous waterfall.

Gadd, a world-renowned ice climber from Alberta, Canada, has traveled to the ends of the earth to find the world’s most challenging climbs, but Niagara Falls, one of his home country‘s most iconic landmarks, is a lifelong mission that he previously thought impossible.

He  is a world renowned ice climber and paraglider from Alberta, Canada. He started winning climbing competitions in the 90’s and hasn’t stopped pioneering the sport since. The past 12 months have been the best of his legendary career.

In February 2014 Gadd successfully climbed Helmcken Falls in British Columbia, Canada, considered the toughest and wildest ice cave in the world; in September 2014 he became a National Geographic’s Adventurer of the Year for paragliding across the Rockies; in November 2014 he ascended the rapidly melting ice glaciers of Kilimanjaro; in January 2015 he took home the top prize at the highly prestigious Ouray Ice Festival competition; and to cap it off, now he ice climbed the most famous waterfall in the world, Niagara Falls.