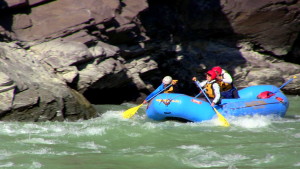 Will rafting camps on the Ganges be banned? Part I of 4

Rafting camps on the Ganges could be banned after a non-profit petitioned India’s top environmental court, saying they cause ecological damage.

The Outdoor Journal examines the ongoing case in a four-part series.

Whitewater rafting on the Ganges in Rishikesh, India, is as iconic as rock climbing in Yosemite National Park is in the USA. For many of North India’s metropolitan citizens, a night out on one of the beach camps is considered as the complete package for those looking for a weekend escape from New Delhi’s concrete jungle. However, the rampant growth of this activity, with many riverside camps on a small stretch of the Ganges may raise a few obstacles for the adventure activity.

An NGO called SAFE (Social Action for Forest and Environment) has filed a petition before the National Green Tribunal*, India’s top environmental court, demanding action against rafting camps by the Ganges along the 36 km section of the river from Kaudiyala to Rishikesh, in Uttarakhand, North India (see the map illustration above).

This 36 km section of the Ganges from Kaudiyala to Rishikesh in Uttarakhand has  17 identified rapids, making it a sought-after stretch for white-water rafting and adventure activities.

(Click here to watch TOJ’s video of the Aquaterra Challenge adventure event on this section of the Ganges.)

This relatively short stretch has sandy beaches, rocky gorges and rapids, and forests with important wildlife. This area is also dotted with a number of rafting camps, ashrams, guest houses and hotels. It is an active hub for tourism.

All of this makes the area a contentious zone, with various bodies vying for a stake – tour operators, ashram owners, government bodies, environment activists.

The NGO, in its petition alleges that “the haphazard and unregulated licensing of river rafting camps along the Ganges from Shivpuri to Rishikesh by state agencies has led to immense pressure on the river,” and that it is on a “first-come –first serve basis and without any consideration for the carrying capacity of the river.”

The petition also expresses concern over “flattening of land” and “pollution caused by the temporary campsites” because of “improper sewage disposal, lack of sanitation and a general pollution caused by drinking alcohol, fire crackers etc.” It also stated that the presence of camps reflected negatively on the ecology and wildlife of the area.

The rafting season lasts nine months in a year, September to June – essentially all months outside of the monsoon season.

Commercial rafting on the Ganges began in the 1980s. “The whitewater rafting/camping model is geared towards wilderness areas and practiced by the outdoors man. That was the concept with which it began,” Yousuf Zaheer of Himalayan River Runners told The Outdoor Journal over telephone.

Himalayan River Runners set up the first river camp on a sand bank in 1988 in Shivpuri. Over the years, the industry has grown several fold. According to the Uttarakhand Tourism Development Board (UTDB) website, there are currently 140 registered rafting operators, and according to figures given by the Uttarakhand’s Forest Department, there are approximately 87 rafting beach camps on the stretch.

A basic beach camp is a camp on a sand bank of the river, consisting of temporary canvas one-two person tents, a kitchen area and dry pit toilets. The camps are temporary and are supposed to be dismantled and removed once the rafting season ends.

The tourism ministry told The Outdoor Journal that the rafting industry saw approximately 53,000 tourists in 2013-14 in the Rishikesh region (along the Ganges). Separate figures for camping were not available.

According to industry estimates, the rafting industry earns a total revenue of at least Rs. 20 Crore ($3.14 million) per season on the Ganges.

In the next part of the series, we deconstruct the petition and the alleged environmental impact of rafting camps on the Ganges.

Feature Image:  Rafting on the Ganges