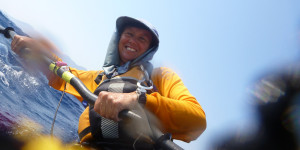 More than 10,000 strokes… that’s what is ahead of her, in her aim to kayak from Germany to Australia – a mammoth feat first achieved by Oskar Speck.

Pushing her limits and making countless paddle strokes through the ebb and tide of the seas and oceans, woman kayaker Sandy Robson’s dream of kayaking from Germany to Australia landed her on Indian shores in mid-May, 2014.

This epic sea journey was first undertaken by Oscar Speck in a humble, collapsible kayak, starting from the banks of the Danube in 1932. With a relentless hunger to explore, he had to hug shores for rest, meet local inhabitants, and brave an unexpected welcome on Australian shores – where he was interned as an “enemy foreigner” in 1939, just at the outbreak of WWII.

A sea kayaker, Sandy Robson aims to be the first woman to kayak from Germany to Australia by 2016. When that happens she would not only have retraced the epic journey of legendary adventurer Oskar Speck but would have also done it in a record time of five years. (Speck took seven years to complete this 50,000 km journey.)

Robson, 46, is an outdoor education teacher with Australian roots with access to modern technology and communication. Oscar Speck on the other hand was a young 25 year-old electrical contractor, who decided to escape the Great Depression, and look for newer pastures for work. He then changed his mind, and decided to carry on to see the world in his modest foldable kayak. He proudly described it as ‘his first-class ticket to everywhere’.

Much has changed in the world since Mr Speck’s maiden voyage,. At times, Robson faced worse conditions on land than in sea. She found it impossible to kayak around Syria due to the ongoing civil war, and was denied permission to paddle around Iran too.

Sandy Robson had clocked nearly 810 nautical miles as she was welcomed on to Indian shores by curious fishing communities, and awe-inspired tourists. Her arrival on the Coromandel coast also confirmed a world record – the first person to circumnavigate Sri Lanka by kayak (just over 1200kms in 33 days). In the process she also became the first woman and second person to cross Palk Strait in a sea kayak, since the first crossing since 1935.

Skirting the shores of different countries along the way, as a woman kayaker, attracted a lot of attention. The Greeks were apparently baffled that a girl could make it all the way through the Catabatic winds in the Aegean Sea in a kayak! She said, “I don’t think they realise what a kayak can do, or a girl for that matter”!

Once on Indian shores, Sandy Robson quickly learnt to cope with the sea of humanity that thronged to catch the unusual sight of a woman kayaking the high seas.

When emailed by TOJ, Sandy Robson replied with a list of Frequently Asked Questions she faces often from journalists and curious spectators:

1. How far from shore do you paddle?

I often paddle just behind where the waves are breaking and less than 1km from shore. However, sometimes while I am going from point to point, this takes me further out, and I have to navigate to an offshore island, so I am a long way out. But most of the time I can easily see the beach and find the goings-on onshore interesting to entertain me on the long days (8-13hrs) on the sea.

I have paddled to the south-east coast of India, and am now planning and raising funds for continuing up the east coast of India and cross into Bangladesh and Myanmar. When the monsoon weather sets in I will stop for a break. Then by October 2014 I will set out for 13 months to paddle through Myanmar, Thailand, Malaysia, Singapore and Indonesia. PNG and Australia will be Stage 5.

3. How far is the trip from Germany to Australia completed by Oskar Speck?

Oskar Speck’s articles say 50,000kms. My distance will be different to Oskar’s because I have had to miss out some parts of the route. In the Middle East, the war zone in Syria meant I could not go there. Mines in Iraq at the mouth of the Euphrates resulted in me ticking off this country from the plan. Iran would not let me paddle there (I could not get permission). Also Pakistan was on the list recommended not to go for Australians. So, things in the world have changed since Oskar Speck’s days, but the adventure is still as awesome as ever. I think I will end up with around 23,000 km when I reach Australia.

4. Why did you kayak solo on the journey?

It is difficult to find expedition partners who can drop everything for 6-months, so I tried to find people in the areas where I was paddling who would come and paddle with me for an hour, a day, a week… I like paddling with other people and I also don’t mind paddling solo. I like the solitude at times, but I also like to socialise and talk to people regularly. During stage one I had other paddlers accompany me for parts of the trip in Germany, Austria, Serbia, Hungary, Macedonia and Turkey, so I had a lot of company and made many new friends in the world-wide paddling community. For Stage 2/3 I contemplated a paddling partner, but in the end I decide to go solo again for India & Sri Lanka. I have had plenty of support and camaraderie throughout the journey so I don’t feel alone very often.

5. Why are you doing this trip?

I am making this trip because I love the long journey and Oskar’s trip has to be the longest and most amazing kayak journey of all time. If I have a dream I think I should do it now… I don’t see the point in working till I am 60 and then retiring… I potentially can’t do this at 60 so I am taking some of my retirement now. Maybe the real purpose of the trip will evolve as time passes. I am meeting kayakers all over the world and that is an exciting part of the journey. Eventually I will write a book about the trip and the insights I have had to the worldwide kayaking community. I am also passionate about the natural environment and this trip is highlighting for me some problems that the world oceans face. I have realised how lucky we are in Australia to have such a rich and diverse ecosystem. We need to keep working on preserving and protecting these unique ecosystems and the environment that is the support system for our planet.

6. How can you afford this trip?

I can’t, I have run out of money and I desperately need some sponsorship! Any suggestions are welcome. Email me. What I really need is 1000 people to donate $20.

7. How old are you and are you married?

In Australia it is rude to ask a woman her age, but in India everyone just asks, I was 43 when I began the Speck journey. I just turned 46… but I don’t act my age! In India I have been asked “Where is your husband” but no, I am not married. In some parts of the world it is assumed that you must be some sort of damaged goods if you are my age and unmarried, but where I am from arranged marriage is uncommon and many of my close friends are not married. I am not paddling around looking for a husband, but who knows who I will meet tomorrow 🙂

8. What is the biggest ocean crossing you have done so far on the trip?

I paddled 109kms over 22hrs in Sri Lanka and landed in Negombo at 4am. I am going to have to work up to being able to paddle around 200kms in a crossing by the time I reach Indonesia – that will be an overnighter. I usually average only 6km per hour, but this will increase if I have the wind behind me and a following sea. I also use a small ‘Flat Earth’ brand kayak sail to give me a boost in the wind. The Flat Earth sail makes me smile!

Marine Charts and maps firstly, and a hand held Garmin GPS to double check my position, calculate drift caused by wind and currents and to make my life on the sea easier. For safety it is important to be able to navigate without relying on technology.

However, what I love about having my GPS is that I can use it to see my speed, estimated arrival at the campsite, distance to go etc. This is particularly helpful on the long crossings between islands, or if you want to see if you can paddle to that next point before it gets dark.

I could of course calculate all of this manually, but it would take me time and the GPS does it at the touch of a button. Garmin also stocks great versions of marine charts that Chennai’s Elektronic Lab have installed on my GPS for me. I have a deck compass fitted on my kayak for navigating a bearing. I use a detachable ‘Silva Precision Kayak Compass’ that clips onto the decklines.

I got one for the Northern Hemisphere and will upgrade to a Southern Hemishere one when I get there. I would not paddle without a compass. On most of the crossings I can see the destination from the outset. Not all of the places will be like this though and sometimes they may be obscured by the sea swell/waves/fog/haze, so a compass is essential in this case.

In the past I have navigated using stars or constellations lined up on my bearing. This is pretty exciting…I was glad to have the backlit GPS though to double check everything when I was out there in the dark (reassuring).

10. How do we donate funds to your trip?

Please email me and I will provide you with the banking details for a transfer or donate through Paypal using the website donate button on the home page, or invite me to stay at your place along the way. Sponsors can have free advertising on my site… please email me to discuss it.

Although there is no team following her around the coast, in India, Sandy Robson’s expedition has been supported by Mr. Jehan Driver of Quest Expeditions who has a watersport/kite surfing centre near Rameswarem. Without these kind of supporters, Robson says she never would have survived in India. “Jehan helped me with logistics and contacts throughout my expedition. So there was always someone I could call if I needed help, assistance with translating or someone to meet me on the beach and help with the heavy kayak.