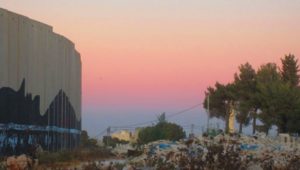 The Palestine Marathon started off as a reaction to Hamas’ attempt to stop women like Sara Naim from running.

On Friday, 31 March, the number of women and men will be equal at the fifth annual race by the segregation wall and refugee camps.

Five years ago, the marathon in the Gaza Strip would have seen a record number of female runners if Hamas hadn’t banned one sex from participating. As a result, the UN canceled the annual event, which was quickly replaced by another marathon the same year on the West Bank. The new marathon emphasised women and men’s right to move freely in Palestine.

Now, when the Palestine Marathon kicks off for the fifth time, far more than the 379 women that had signed up for the Gaza Marathon in 2013 will hit the tracks. On Friday, 31 March, 4,756 men and women will set off near the Church of Nativity in Bethlehem, and they will run in equal numbers during the marathon, half marathon or 10K race.

In 2015, 39% of the runners were female and Sara Naim was one of them. She had never run a half marathon when she signed up for the race, the same day as she first heard of it: “I think it’s an important one to run because it has more meaning than other marathons,” she explains, adding “It’s not just for yourself, for your fitness, your self-motivation, self-confidence and all of that. You are really running for the right to movement.”

“You are celebrating moving with the pride that movement deserves and the energy that it deserves. It is like this complete liberation and it is so great seeing so many Palestinians participating and see how inspired they are by running it,” she says.

Along with two friends, she set-up fundraising and hit the tracks in running shorts and a T-shirt she picked up at the race: “Initially I wore a tank top. I asked the women if it was appropriate, just before the race when we were stretching, and they said that ‘we wouldn’t wear that.’ So I went and changed.”

“It’s good to respect the culture where you are. With the t-shirt, I compromised completely so that no one else would feel uncomfortable, not just me. But I wore running shorts,” she says and adds “But I wasn’t unique in that way. It was a marathon. There was never a suggestion of wearing long pants. They never asked us and I can’t run in leggings. I find it very uncomfortable.”

She ran through beautiful and peaceful olive groves, refugee camps, farms, fields and in the shadow of the almost 8 meters high graffiti covered segregation wall. Not far from Banksy’s ‘The girl with the Balloons’ painting, a melange of Palestinians, Israelis, and internationals ran with kids joining them along the windy course.

“There was such a strong sense of solidarity,” Sara recalls, “A lot of Palestinians joined you from the village and they started running with you for a part of the way. They weren’t registered, but they got involved.“

Many shops were closed and Bethlehem was quiet. People were sitting outside on plastic chairs on their porch or little garden, watching the runners passing by.

“A lot of people from the town stopped and watched. They had groceries in their hands and just watched the whole run. I think they were intrigued by the people that had come.”

Last year, she had planned to go back for another run, but life came between. Another race in Palestine is still on her horizon and for other runners who want to check out the race and follow this year’s participants go to this site.