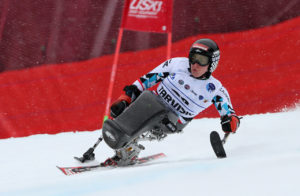 An overwhelmed Claudia Lösch brought home five medals at the World Para Alpine Skiing Championships in Tarvisio, Italy last week. Anna Schaffelhuber and Jeroen Kampschreur were among some of the winners of the exciting event.

“I cried after I crossed the finish line because I was so overwhelmed with emotions, because I’ve struggled so much over the last few days,” says Claudia Lösch just moments after seizing her second gold medal in this year’s World Championships in sit-skiing.

“Especially because I hadn’t expected it, it was so great, so cool,” she adds.

Even though the Austrian athlete was in good shape and couldn’t wait for the games to start, the Giant Slalom season had been a bit wobbly leading up to the Championships in Tarvisio, January 22 to January 31. The race that she describes as fun, but demanding, would also inevitably come with tough competitors like Anna Schaffelhuber and Anna-Lena Forster from Germany.

About 130 skiers from 25 countries competed in the 30 medal events. One of the most exciting moments was the second run in Slalom where the Germans showed off their impressive speed in women sitting. Schaffelhuber was in the lead after the first run, but Forster’s incredible performance in the second run reduced the gap to just 0.49 seconds between the two. Thus, Schaffelhuber grabbed her third gold medal in the Italian Alps, Forster got a silver and Lösch bronze.

In the men sitting, Jeroen Kampschreur from the Netherlands was in excellent shape and claimed three wins. Mac Marcoux from Canada and Henrieta Farkasova from Slovakia also showed off in the visually impaired disciplines with quadruple wins. In Super-G, Italian Giacomo Bertagnolli claimed the title just 1.48 seconds ahead of Marcoux who came second.

The battle is part of the reason Lösch fell in love with sit-skiing. “The thing that I like the most about racing is to push my own limit. To really try and give my best,” the 28-year-old told The Outdoor Journal in a telephone interview.

Getting to the top requires hard work; with studies, practice and a life outside the sport, Lösch sometimes wishes the days had 48 hours rather than 24. She has fought for her dream and advises younger girls to do the same. “Never stop fighting. Whatever happens, never give up. That’s the most important thing,” she says.

“The other thing is a good sport environment. As soon as you know that someone is not supporting you, or when you think that something around you needs to be different, try to change it. Don’t give up or don’t stick to things that you don’t think helps you to move forward.”

20 years ago, she got stuck in front of the telly watching the Para World Championship that her home country was hosting. Fascinated by the cool skiers, she decided to try it herself and a few years later, in 2006, she had her first ever podium finish in a World Championship.

Since then, the number of her medals from major championships has steadily grown, but it is a humble World Champion in Tarvisio that will defend two titles at the upcoming 2018 Paralympics.”If others can take inspiration from what I do, from the way I do things, then I’m happy. But I don’t feel comfortable picking up that role and say ‘Hey guys, you have to be like me to get where I am’,” she says.

For all results and more information on the 2017 World Alpine Skiing Championships, please visit their website and Facebook page.