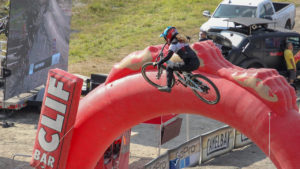 Freeride has remained conspicuously male-dominated. Now, a tenacious group of riders are part of a movement to change that, and they’re throwing down at some of mountain biking’s biggest events.

This year we welcomed the inaugural Women’s Slopestyle Tour, which gave women opportunities to compete in dirt jump, freeride and slopestyle events throughout North America and allowed female riders to – for the first time – earn points in the Freeride Mountain Biking Association (FMBA) worldwide ranking system. As part of the tour, Crankworx Whistler, one of the most celebrated mountain biking festivals, included women’s categories in its ‘Speed and Style’ and ‘Best Trick’ competitions, which had previously been open to just men.

“Every year there’s like a third more women out riding,” Mason said. “I think eventually we’ll get away from the ‘ladies only,’ and it’ll be an ‘everybody, let’s party’ kind of thing.”

I caught up with Mason at Crankworx, where she cheered for all the riders and took notes on their Speed and Style runs. The competition integrated elements from racing and slopestyle, with competitors riding a course of fast berms, rollers and two big trick jumps. They rode against the clock, but were also judged and given time deductions based on their tricks.

At events that have never before included women, competitors and event organizers alike face a learning curve. The Speed and Style jumps were so big that the women (and even some of the top men) struggled to clear them, making it next to impossible for them to show their best tricks.

Competitor Chelsea Kimball said she wishes the Speed and Style course design had been more realistic. Kimball can backflip her bike on the right jumps, but the difficult course meant that just making it down the hill smoothly became a priority.

“It was a bit harder than it looked,” Kimball said. “It was super fun, but you really had to rail the corners to make it what it should be.”

Kat Sweet, who runs the Sweetlines coaching organization and puts on one of the Women’s Slopestyle Tour events, echoed Kimball’s opinion of the course.

“Between the jumps being a little bit too gnarly and the headwind blowing on them, it didn’t showcase what they really can do,” Sweet said. “The sport has progressed so much, especially in jumping, and the women are really pushing. I would love to be able to showcase that better.”

Sweet acknowledges that women haven’t been involved in freeride for as long as men have, and can’t be expected to skip the development phase.

“Every year, things get a little bigger, and we haven’t quite caught up yet. If we built a course that would really show off what we’re doing, that would help us elevate both the kids and the ladies,” Sweet said. “That’s what I’m hoping for.”

But despite minor snags like the Crankworx course, 2019 can be considered a milestone year for female freeriders.

Women’s Slopestyle Tour competitors are universally enthusiastic about the increased opportunities for women to test themselves in competition.

“The slopestyle tour has been a blast,” said Kimball, who is ranked fifth in the FMBA rankings. “I never thought I’d be doing anything like this, but I’ve had a really good time with it meeting more women who are trying to do the same thing and just having a good time.”

Sweet’s organization, Sweetlines, ran the Sugar Showdown, which was the first event in the tour. The Sugar Showdown was first held in 2012, but its new partnership with the FMBA, the official international freeride governing body, allowed it to become something bigger than ever before.

“Having it be a FMBA bronze-level event really made people push a little bit harder, so it was really cool to be the first stop in that,” Sweet explained. “It was kind of an honor to be the first.”

As more women pursue freeride, the sport’s image is becoming more inclusive, making it accessible for even more women. And as perceptions of mountain biking shift, Mason, Sweet and Kimball agree that the bike industry needs to keep up with the evolution by investing in female riders.

Mason said that increased support from within the bike world would help grow the scene, which would change the sport’s image, which would involve more women, in turn attracting yet more support.

“It’s an upward spiral,” she said. “We need awareness. Awareness that women are doing these kinds of things and that it’s okay and easy, and not just a ‘guys only’ sport.”

Sweet said she’s excited to see what the next generation of female riders can accomplish. Recruiting and coaching young girls is an important part of what organizations like Sweetlines and the Women’s Freeride Movement do, in addition to giving them competition platforms, especially since women like Sweet and Mason can be the role models that many of us didn’t have when we were younger.

With all the enthusiasm for the Women’s Slopestyle Tour and its associated movement, it’s safe to say that the necessary changes are happening – maybe slowly, but inevitably. I, personally, hope for a future in which little girls receive the same encouragement to mountain bike as little boys do. That future seems to be coming, and it’s bright.

Cover photo: Casey Brown throws a stylish one-footer over one of the Speed and Style trick jumps to claim 2nd place. Photo by Cailin Carrier