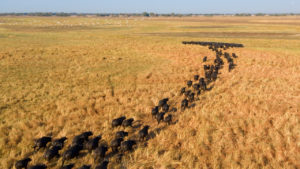 Conservation, Kafue Style: We're delighted to learn that there has been a huge increase in wildlife numbers in Zambia’s largest national park.

The Kafue National Park, is Zambia’s oldest and largest national park and one of the continent’s wildest. Wilderness Safaris have just released extracts (the full document is yet to be published) from an aerial population survey they carried out in conjunction with the Zambian Department of National Parks and Wildlife (DPNW). The survey, conducted ten years after their first aerial survey, reveals a significant increase in wildlife numbers, in different habitat zones in the park. The survey shows promising population growths in a number of species; including red lechwe which have increased in numbers by 487%, puku by 103%, Lichtenstein’s hartebeest by 78%, and blue wildebeest by 113%.

Formerly plagued by poaching, it has taken a dedicated commitment, both physically and financially, with assistance from DPNW, local lodges and operators and various NGO’s (World Bank, Norad, WWF etc.) to turn the tide and protect Kafue’s wildlife.

4,000 – 6,000 poachers live in households situated in the Game Management Areas adjacent to the Kafue National Park.

Research by the Zambian Department of National Parks and Wildlife (DNPW) into illegal hunting and the bush meat trade, revealed that an estimated 4,000 – 6,000 poachers live in households situated in the Game Management Areas adjacent to the Kafue National Park. 75% of these poachers use firearms (accessed both legally and illegally), while 13% are using snares. The DNPW have also found that there has been illegal hunting conducted by licensed hunters, who are ‘harvesting’ as much as double their allocated quota.

The Busanga swamps, with their adjacent flood plains, in the far northwest of the park, is probably the best known area of Kafue National Park. Much of this Northern sector is permanently waterlogged, but in the dry season (May to November) the water recedes, leaving vast expanses of lush grazing, irresistible to the array of wildlife found here. The Busanga Plains is definitely a highlight of Kafue National Park, for both its diversity and quantity of game.

With the coming of the rains and the flooding of the plains, the camps on the Busanga Plains close, due to limited access and infrastructure. Although several camps have caretakers during this period, there is limited anti-poaching undertaken by the Department of National Parks and Wildlife (DNPW) due both to chronic underfunding and poor accessibility. This has led to widespread poaching, as poachers have been able to operate with little fear of reprisal from law enforcement. In some cases camp caretakers were left powerless, watching poaching activities being carried out right before their eyes.

Over the last few years Mukambi Safaris,working with Wilderness Safaris, have brought in anti-poaching patrols from the DNPW; providing transport and deployment of the anti- poaching teams and paying for rations and bonuses. They were not sure how effective the patrols were, but what they did know was that although poaching was reducing, it was still going on.

With this in mind the local operators felt it was imperative to protect the area more effectively. “Lessons from the past told us that we need better patrols and more information on the effectiveness of these patrols,” says Edjan van der Heide of Mukambi Lodge. A new approach was devised and a fresh anti- poaching project was born…

“the poachers know they cannot escape from a helicopter,”

The ground operators would fund and support a year round DPNW patrol team presence on the Busanga Plains. As the Busanga Plains flood annually, greatly limiting ground access, air surveillance and the deployment of teams by helicopter was needed. The geography of the plains make it ideal for air surveillance, with the open plains offering no hiding places for poachers. A group of ground operators, Mukambi Safaris, Wilderness Safaris, Namib Sky Balloon Safaris and Jamp Safaris, would fund the patrol teams; covering rations, fuel, bonuses and the cost of necessary aerial support (which would be provided at cost price, by Ntengu Safaris, based in the Game Management Area adjacent to the plains). A small two seater spotter plane would do surveillance of the area, and if poachers were spotted, then a helicopter would be dispatched, along with the patrol team, to wherever illegal activities have been seen, reaching the site within about 15min.

So far the results are very promising. “We noticed hardly any poaching activities, since the poachers know they cannot escape from a helicopter,” says Edjan. A number of poachers have been arrested, poaching camps have been destroyed, weapons and other equipment confiscated. Ron Goatley, MD of Wilderness Safaris, says that “this demonstrates our commitment to conservation in Kafue and we are thrilled that the survey’s findings further prove… that we have made a dramatic impact on the reduction of poaching in the region.”

However this aerial surveillance project is not really viable in the long term. Although the operators are happy to contribute to the costs of the project, it ultimately needs to be the responsibility of the DPNW to monitor the park and control poaching. Unless DPNW are given greater access to funding however, it is not certain that they will ever be in a position to do so.

The Kafue doesn’t have the huge herds of game yet that can be found elsewhere in Africa, but what the park may lack in animal density it more than makes up for in diversity. There are at least 161 species of mammals, 22 of which are antelope. Kafue boasts the highest antelope diversity of any African park, with everything from the tiny blue duiker to the massive eland, with reedbuck, sable, hartebeest, puku, Defassa waterbuck and many more in between. The Busanga Plains is home to thousands of red lechwe often stretching as far as the eye can see, frequently in the company of herds of roan and buffalo. An incredible 24 ungulate species occur in the park, even more impressive when you consider that some of the best game viewing areas in the Okavango or Hwange only have around 17 or 18 ungulate species. There are six cat species in the park: lion, leopard, cheetah, caracal, serval and African wildcat. Elephant, zebra, hyena, wild dog and warthog can also be added to the mammal list. Kafue National Park is named after the river which bisects it almost north to south. The river is home to fish, otters and hippos, full of sand banks where spur-wing geese saunter, colonies of African skimmers swoop and crocodiles sunbathe.

Mass tourism does not exist here and the bush is still pure and unexplored. Infrastructure is sparse and visitor numbers are low (somewhere in the region of 15,000 to 20,000 per annum) and despite its proximity to both Lusaka and Livingstone, Kafue National Park remains little-known with huge tracts of its bush still pristine. In the north, the Busanga Plains, with an atmosphere of untouched solitude, is a remote and timeless gem, and without a doubt the park and its wildlife are well worth preserving. It is to be hoped that the anti-poaching initiatives instigated by these passionate and dedicated ground operators in the park will continue, and ultimately that the Zambian Department of National Parks and Wildlife will be in a position to assist in an increased way.