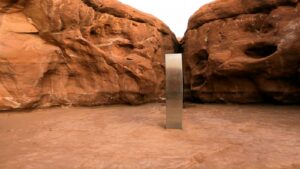 The monolith that captured international attention and baffled officials has allegedly been removed by “Sketchy” Andy and his team according to his recent Facebook video post.

Discovered on November 18th by officers from the Utah Department of Public Safety’s Aero Bureau in southeastern Utah, near the Canyonlands Needles District—and bearing a striking resemblance to the one in “2001: A Space Odyssey”, the shiny silver object disappeared around 30th November, prompting conspiracy theories that involved aliens.

On December 1st, prominent slackliner Andy Lewis posted on his Facebook, saying, “On the night of November 27, 2020, at about 8:30 pm— our team removed the Utah Monolith. We will not be including any other information, answers, or insight at this time. #slacklife” A short Youtube video accompanied the statement that shows four individuals moving an object that certainly looks like the monolith, at night. One of them says, “the safe word is run”. Lewis, a local from Moab, is a record-setting performer and athlete who once famously performed a trick line while Madonna performed behind him during the NFL Super Bowl.

According to the New York Times, a photographer, Ross Bernards, saw four men dismantle the shiny object, and as they walked off with the pieces, one of them said “Leave no trace”. Bernards was there to shoot dramatic photographs of the object. After witnessing the four men remove the structure at around 8:40 pm, he heard one of them say, “This is why you don’t leave trash in the desert”. While the object’s origins remain unknown, speculations lead most to believe that it is some sort of art installation. Some speculated the monolith to be the work of the late sculptor John McCracken, who told his son that “he would like to leave his artwork in remote places to be discovered later.”

However, the mysterious case of the disappearing monolith isn’t exactly solved. While Lewis & Co. may have removed this one, another was found in Romania—and it has too, vanished. The second monolith, which was around 9 feet in height, was found on Mount Ceahlau, or the “Holy Mountain”. A journalist from Romania, Robert Losub, told Reuters that, “The 2.8 meter (9ft) tall structure disappeared overnight as quietly as it was erected last week. An unidentified person, apparently a bad local welder, made it … now all that remains is just a small hole covered by rocky soil.”

Now, unless Andy Lewis has a bunch of extra miles and is jet setting around the world to remove monoliths (we wouldn’t be surprised), we’re still in the dark about who exactly made it disappear. In “2001: A Space Odyssey”, an epic sci-fi film by Stanley Kubrick, the monolith symbolizes a giant leap and advancement in human evolution, installed by extraterrestrials. If this is truly the case, the monoliths aren’t working, and ET wants a refund.