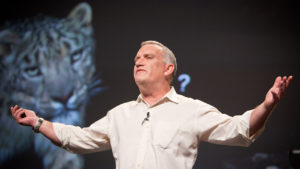 Big cat expert Alan Rabinowitz lived to protect wilderness, and the jaguars that gave him a voice as a child.

At 64, Alan Rabinowitz died of cancer on August 5. He is fondly remembered for his relentless dedication towards wild cats across the world.

For a young boy with a severe stutter, a life with wildlife was inevitable. His tryst with wild cats began at the Bronx Zoo, where his deep connection with a jaguar didn’t require any speech. As a child, he had opposite experiences with people and animals. In school, he recalls in a National Geographic PBS Special, he was asked to leave the classroom to go to the one with problem children, and he was the only stutterer in that class. He remembered feeling shame because people misunderstood his stuttering for retardedness. Animals, on the other hand, were his refuge. They were the only creatures he could speak to, and the only time he talked out loud without any speech blocks. He used to visit his pets in the closet everyday until he graduated college. “The animals didn’t judge me. The animals had no expectations from me. The animals just let me be as I was,” Rabinowitz said in an interview.

What started as a childhood moment later developed into a close connection with animals who were like him, without a voice.  Those interactions served as an important foundation to shape the future of animals on the planet. Rabinowitz’s voice was meant for big cats, which was loud and clear enough to have a huge impact in wildlife conservation.

“An all-encompassing, you-made-a-difference feeling sweeps over me.”

Rabinowitz studied tigers, jaguars, and other wild cats for more than three decades of his life. Not only did he conduct extensive research on them, but was also a major force behind creating parks and wildlife preserves to protect these species. His first significant feat was the world’s first jaguar sanctuary in Belize, followed by Taiwan’s largest protected area. In Thailand, he contributed to the establishment of Huai Kha Khaeng Sanctuary, now recognized as a UNESCO World Biosphere Reserve. His love for wild cats also took him to the totalitarian nation of Myanmar, where he worked against all odds to create five new protected areas and work in a context that also allowed illegal sale of endangered species.

In his book, Life in the Valley of Death, Rabinowitz describes his reaction after receiving positive news about establishing a protected area in Myanmar. “An all-encompassing, you-made-a-difference feeling sweeps over me. This is only the fifth time I’ve had such a feeling in twenty years of work, the most recent with the signing of Hkakabo Razi National Park. It’s difficult to explain this feeling to people who haven’t experienced it themselves. I’m not sure I understand it myself. But it’s what drives me, especially when things are at their most difficult,” he writes.

“As a lifelong voice for the voiceless, he changed the fate of tigers, jaguars, and other at-risk species.”

Such was the perseverance of Rabinowitz who fought all battles possible with human beings to help give animals a chance at life. As part of this effort, he co-founded Panthera, an organisation with a global mission to conserve big cats in every corner.

“The conservation community has lost a legend,” said Fred Launay, the CEO of Panthera, in a statement, according to National Geographic. “Alan was a fearless and outspoken champion for the conservation of our planet’s iconic wild cats and wild places. As a lifelong voice for the voiceless, he changed the fate of tigers, jaguars, and other at-risk species by placing their protection on the agendas of world leaders from Asia to Latin America for the very first time.”

Before starting Panthera in 2008, Rabinowitz had been associated with America’s Wildlife Conservation Society for nearly three decades. That’s where his work on jaguars, tigers, rhinos, bears, racoons, Asiatic leopards, leopard cats, and civets gained recognition, according to The Independent.

Born in Brooklyn on December 31, 1953, Alan Robert Rabinowitz received a M.S. and Ph.D. in ecology from the University of Tennessee. After writing over 100 scientific articles, Rabinowitz later became an avid storyteller and wrote eight books, including a children’s book, that detail his personal accounts of conservation efforts in different countries.

He may have had a stutter to begin with, but the entire world ended up listening to Rabinowitz’s insights on big cats and the conservation they deserve.

Alan Robert Rabinowitz is survived by his wife Salisa, and two children.