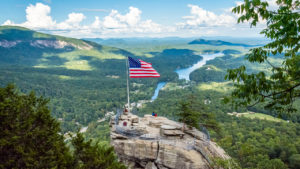 Since its creation in 1902, climbing advocacy non-profit the American Alpine Club (AAC) has championed protection for the public lands that serve as unrivaled outdoor venues for climbers and other recreators. Their latest outreach program, the “Hill to Crag” initiative, offers lawmakers and their staff a chance to experience these public lands at iconic climbing spots across the nation. The excursions provision local elected officials with a fun day in a harness, a few sore muscles, and a heightened appreciation for public lands to parlay into protective legislature.

After the inaugural event in spring 2018, AAC’s Salt Lake Chapter Chair Byron Harvison saw the potential for veterans to contribute. Harvison, an Army Major and experienced climber, felt that veteran involvement could engender open dialogue. Conversations regarding public lands management can be polarizing; Harvison thinks politicians will respond positively to the testimonial of veterans. “Elected officials may be more inclined to hear what veterans have to say,” he says. Likewise, “discharged veterans oftentimes have a desire to continue to serve and this is a great opportunity.”

Harvison explains the Hill to Crag stratagem. “First, we talk about outdoor recreation as a way to deal with veteran-specific issues like PTSD, addiction, and depression following deployment,” he extolls. These dialogues are personal and poignant. Harvison focused on rock climbing after an intense deployment in Afghanistan, and he isn’t the only veteran to credit outdoor recreation with healing. “A lot of guys can say ‘Hey, getting outside saved my life’, and they are able to share those raw stories with these legislators,” he adds.

Harvison knows politicians are beholden to monetary interests and thus explicates the value of outdoor recreation on the local and national economy: “Nationally, outdoor recreation has surpassed the oil and gas industry in economic terms.” A recent government report estimates that outdoor recreation contributes $412 billion annually to the US GDP, and Harvison recognizes the potential for the industry to throw its weight around. “We are finding our voice and coming to realize how loud that voice can be,” he explains.

Chalk it up to smart strategy, productive dialogue, or a bit of crag magic, but the Hill to Crag events have already made an impact. The inaugural excursion in May of 2018 was testimony to the power of storytelling as pedagogy. Members of the AAC and climbing advocacy group the Access Fund brought Utah Congressman John Curtis to rock climbing mecca Joe’s Valley Boulders in Emery County, UT. Harvison explained to the lawmaker that “each climber contributes around $58 per night to the local economy of nearby Castle Dale.” Castle Dale, a tiny town of 3,500, hosts 19,000-25,000 climbers annually from around the world who are drawn to the area’s intricate sandstone boulders. Emery County faces the economic stagnation typical of a declining coal-mining community, but recreational tourism has considerable potential. “Climbing is a sustainable resource,” Harvison enthuses. “We were able to show Curtis the national and international appeal of our public lands.” In July of this year, Curtis proposed the Emery County Public Land Management Act, which would create a National Conservation Area out of the San Rafael Swell, designating over a half-million acres of the redrock desert parcel federally protected wilderness. The proposal juxtaposes nearly every piece of land-grab legislation to emerge from Utah in the past year and wagers on the economic potential of recreational tourism. Curtis’s proposition, on the heels of a Hill to Crag event, is radical in its embrace of public access instead of for-profit enterprise.

Perhaps the AAC recognized the aptitude of rock climbing as a metaphor for public lands access when they launched the Hill to Crag program. Central to both climbing and public lands advocacy is an ethos of respect for natural resources and the responsible placing of protections, be them nuts and crams or legislature. The AAC will hold their final adventure of 2018 on November 16 in Chimney Rock State Park, North Carolina (pictured in cover photo). Harvison says that the program will launch spring events in Oregon and Montana and has plans for a route bolting clinic in Wyoming after a successful Hill to Crag climb in the state’s Vedauwoo Recreation Area last month. In concert with the Hill to Crag series, the American Alpine Club is also expanding veteran and active-duty military outreach with new discounted club membership options and targeted events.

Special thanks to US Army Major Byron Harvison, who was interviewed for this piece.