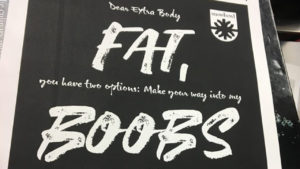 Montana Snowbowl and their ad agency, Spiker Communications, are hearing cries of disapproval over a recent advertisement referring to body fat only being acceptable in the form of boobs.

In the #MeToo era of women taking control of their bodies and their rights, a recent Montana ski area advertisement has spurred an uproar of disapproval throughout the ski community. The advertisement for Montana Snowbowl (shown below), created by ad agency, Spiker Communications, was circulated through school campuses in Missoula. 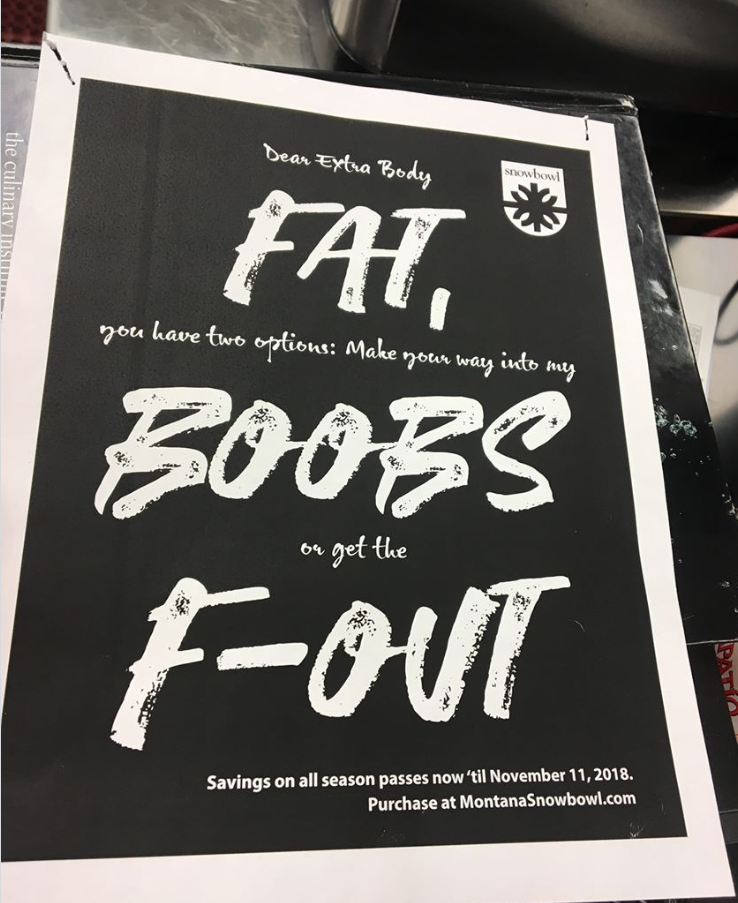 A social media user shared a photo of the advertisement on Facebook, which then circulated quickly through the Missoula ski community, receiving over 100 shares in under two hours. One social media user commented, “Jesus. H. Christ. It’s 2018, my grandma had to deal with this shit, and we still have to now?!”. Another said, “I can’t even imagine why anyone would think this was ok, funny, edgy, or whatever. It’s fucking terrible!”

Many faithful Snowbowl skiers called up the ski area exclaiming their refusal to buy passes at the resort in the future based on this advertisement. Both Snowbowl, and the ad agency responsible for the ad, Spiker Communications, responded to the backlash with public apology over Facebook .

The apologies issued over Facebook were received with mixed emotions. One social media user responded, “Stop making excuses and throwing your agency under the bus. Take accountability.”

Another responded, “You know what pissed me off the most? Far more than the original post? The transparent, lame-ass, non-apology, ‘apology.’ It’s essentially: ‘I’m sorry that you had feelings that I didn’t anticipate. That’s not what I meant. And, instead of reflecting on why so many people are offended/upset/disappointed/annoyed, I’m going to subtly justify my actions … aaaaand try to slip in ANOTHER tone-deaf, off-the-mark, attempt to market the business that apparently pays me to help draw people TO the mountain.’ #nailedit #winning”

Other social media users urged Montana Snowbowl to fire this ad agency and find a new one. For the record, this did not happen. The ski area is continuing to use this ad agency despite the mishap.

Further public comments can be found by clicking on the embedded images above.

With all this negativity towards women in the outdoor industry, here at The Outdoor Journal, we would now like to celebrate the outdoor brands that are doing the exact opposite of this. Outdoor companies that are consciously taking action to promote and support women in outdoor adventure sports.

Here are three companies that are doing an excellent job of increasing women’s participation in outdoor adventure sports:

The North Face with their #shemovesmountains global initiative to celebrate the stories of female explorers and athletes.