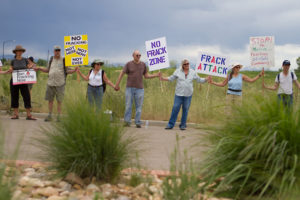 The grassroots initiative, which Boulder voters will see on the ballot come November, would mandate a state-wide, half-mile “buffer zone” of fracking wells from occupied buildings.

Hydraulic fracturing, known colloquially as “fracking”, has been controversial since it became the widespread method of shale gas production over the past decade. The technique involves pumping millions of gallons of highly-pressurized water and chemicals into deep shale formations to proliferate cracks and free gas for extraction. On Colorado’s crowded Front Range, where land is a premium, active wells operate within arm’s reach of houses, schools, and other occupied structures.

significantly more likely to have a low birth-weight baby

According to Colorado Rising, a grassroots non-profit committed to exposing fracking’s health and safety concerns, fracking’s toll on public health outweighs the economic benefits. Research from the Colorado Public School of Health indicates that proximity to fracking operations poses serious risks to health and safety. Among these risks include exposure to cancer-causing toxins such as benzene and air pollutants. An analyses of public health research at the University of Chicago examined correlation between prenatal health and proximity to fracking wells and found that mothers living within a half-mile radius of active wells were significantly more likely to have a low birth-weight baby than mothers who lived farther away. This half-mile radius, incidentally, is the amount of buffer the ballot proposition would require.

The research is preliminary, however, as it cannot definitively prove point-source contamination. To date, no double-blind studies have ever linked fracking directly to low birth weights. But according to spokesperson Anne Lee Foster of Colorado Rising, “Weld County is the most fracked county (host to over 23,000 wells) and has twice the still-born rate of other Colorado counties”. She claims the spike in still-borns occurred in 2009, after a 2008 influx in natural gas drilling. But the list of environmental hazards does not end with carcinogens. The Colorado Rising report also condemns fracking’s environmental toll. Their briefing states that because of methane leakage, “…fracking, transporting and burning natural gas for electricity is likely as bad as or worse for climate change than coal or oil”. The jury is still out on this claim. Granted, fracking is energy-intensive and petrochemical-dependent, but burning natural gas emits half as much carbon dioxide as burning oil or gasoline. Methane leakage in drilling and pipeline transportation is minor, though Colorado Gas & Oil industry officials and public health activists like Colorado Rising disagree on the amount and impact of leakage.

Despite its controversy, there are approximately 50,000 active oil and gas wells in Colorado, many of them concentrated in Boulder and Weld Counties. Under current legislature, fracking operations can take place 500 feet from an occupied home and 1,000 feet from a school building.

do Colorado residents share Foster’s precautionary mindset, or are the economic gains too good to forgo?

Public demand for an expanded mandatory buffer zone from occupied buildings compounded after a 2017 incident in which an open gas line from an operating well leaked into a Firestone home, causing an explosion that killed two. Colorado Rising wrangled over 172,000 signatures for their “Safer Setbacks from Fracking” initiative, which was subsequently approved for November’s ballot. The regulation would underscore the burgeoning research on detrimental public health and environmental impacts of hydraulic fracturing—research that Colorado’s oil and gas industry might call inchoate and inconclusive. It would increase the mandatory buffer zone between oil and gas wells and occupied buildings to 2,500 feet—a move that the Colorado Petroleum Council has deemed “job-killing” and the Colorado Oil and Gas Association has said risks “more than $1 billion in taxes for schools, parks, and libraries, and our nation’s energy security”. And Weld County, situated on potent shale, has benefited from the incursion of jobs and money brought by the industry’s presence in the area.

The future of Colorado’s oil and gas sector is up in the air, and the proposed initiative would significantly reduce the amount of viable drilling land in populated regions of the state. As Anne Lee Foster summarizes, “the general consensus is that negative health impacts are possible, and it’s best to err on the side of caution”. November’s vote will tap into the metaphorical shale deposits of public sentiment towards fracking; do Colorado residents share Foster’s precautionary mindset, or are the economic gains too good to forgo?

Special thanks to Anne Lee Foster, who was interviewed for this piece. The Colorado Oil and Gas Board did not respond to request for commentary.