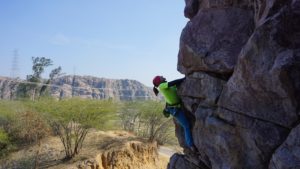 Fueled by a common passion, an assembly of seasoned climbers revive the traditional climbing movement just outside of Delhi, India.

The wind coming off the rock face felt inhospitable, but the air itself gave off a sense of communal joy. After 33 years in absence, the thrill at the Great Indian Trad Festival, or Gritfest, emerged again for a new generation.

We stood together in ceremony around Mohit Oberoi, aka Mo, the architect of the Dhauj trad climbing era, whose been climbing in the area since 1983. Mo, who continues to inspire many, briefly underlined the cause behind the Gritfest: a two-day annual trad climbing gathering that finally saw the light of day on February 23rd and 24th 2019. The gathering, although one of its kind, was not the first. The first one took place in 1985 and was put together by Tejvir Khurrana.

For those of you who might be unfamiliar with the climbing scene in India, Dhauj is where some of the country’s finest climbing began. Located in Faridabad Haryana, Dhauj is roughly between 18 to 20 miles away from Delhi. The region is home to the Aravali Mountains that start in Delhi and pass through southern Haryana to the state of Rajasthan across the west, ending in Gujrat.

The Great Indian Trad Fest was long overdue and brought together by Ashwin Shah, who is the figurative sentinel guard of the Dhauj territory. In addition to being the guy with more gear than you’d ever expect one man to own, he is also often caught headhunting belayers, sometimes even climbers. His never-aging obsession with Dhauj is also very contagious. I’m grateful to start my own climbing journey with Ashwin. In my first attempts at belaying, my simple mistake caused him to drop on a 5-meter whipper. It could have been more.

That whipper, in hindsight, transmuted into a defining moment for me. The primal squeal Ashwin let out while falling made me realize the danger of this new passion I couldn’t help but fall for myself. That being said, had it not been for Ashwin’s impressionable optimism to entrust me with his life, Dhauj wouldn’t have held the same allure that it does for me now. Ashwin started contemplating the Gritfest after his return from Ramanagara Romp in Bangalore: a three-day event that gauged the possibility of climbs undertaken during a two-day window.

Read Next: Why the Aravalli Forest Range is the Most Degraded Zone in India

The idea behind the Gritfest is to celebrate a legacy built over the last four to five decades. A legacy that should be preserved for posterity as it has been thus far. “The objective is to think about the future,” said Mo, as he jogged his memory from back in the days. Furthermore, the fest also aims to encourage and educate aspiring climbers on traditional climbing: a form of climbing that requires climbers to place gear to protect against falls, and remove it when a pitch is complete.

Sadly, the fest also takes place at a time when the government of Haryana seeks to amend an age-old act,  the Punjab Land Preservation Act, 1900 (PLPA), that would put thousands of acres of land in the Aravalli range under threat. India’s Supreme Court, however, has reigned in and we will likely know the outcome in the days to come.

The know-how around trad climbing rests with a handful of members in the community. This also makes the Gritfest ideal for supporting a trad-exploration pivot in the country. Dhauj, also home to the oldest fold mountains in India, has been scoped out with lines that go over 100 feet. The guidebook compiled by Mohit Oberoi documents some fine world-class routes since the early stages of climbing in and around Delhi. With grades ranging between 5.4 to 5.12a, Dhauj has more than 270 promising routes.

The fest kicked off with Mo leading the first pitch on Aries, a 5.6 rating, 60 feet high face at the prow, while the community followed. Seeing Mo repeat some of the climbs he’s been doing for over 30 years was exhilarating to say the least. Amongst the fellow climbers, we also had some professional athletes, including Sandeep Maity, Bharat Bhusan, and Prerna Dangi. The fest also saw participation from the founders of Suru Fest and BoulderBox.

“Trad climbing can be a humbling experience”

While the Gritfest finally came to fruition, I wondered as to why it took so long for it to happen. One of the questions that I particularly had in mind was regarding the popularity of places such as Badami and Hampi over Dhauj. Although the style of climbing varies across all regions, the scope and thrill of climbing in Dhauj remains underestimated. For one reason, I knew that there is a serious dearth of trad climbing skills which makes it partly inaccessible. Whereas the red sandstone crags bolted with possibly the best sports routes in India make the approach to Badami relatively easier.

I reached out to Mo, and asked him to share his perspective on the fest as well as some of the questions I had in mind.

1) Tell us a little about your thoughts on theGritfest?

It’s a great way for climbers to get together and climb, form new partnerships, share information and also solidify the ethic part of climbing, especially in Dhauj, which is purely a trad climbing area.

2) What is it that the current community can learn from Gritfest?

The possibility of climbing in Dhauj is huge and there exists such an amazing playground right on their doorstep, also Dhauj is an amazing place to learn “trad climbing”.

3) Since it was the first installment, where do you see it heading in the future?

I think it will grow to a large number of climbers congregating here as long as we KEEP IT SIMPLE, and climb as much as possible. We should keep the learning workshops “How to climb” type of courses out of this. This should be one event where we just climb at whatever level we feel comfortable with.

4) Why is it that Dhauj isn’t nearly as popular as Badami or Hampi?

I’m not sure why, really. It’s possible that the grades are not “bragging” grades and climbers don’t feel comfortable starting to lead or climb on “trad” at a lower range of grades. “Trad” climbing can be a humbling experience as one has to work up from the lower grades upwards. It is both a mental and physical challenge unlike climbing on bolts. Despite the guidebook, there is a reluctance to going out to Dhauj which surprises me, that Delhi / NCR locals would rather have travelled more times to Badami / Hampi than take a short ride to their local crag.

Perhaps it is about bragging rights. Perhaps it’s about the lack of skills. Whatever the reason might be, Dhauj will continue to inspire generations to come and fests like Gritfest will serve to strengthen our community. Whether you are new to climbing or have been at it for years, there is always something to learn. 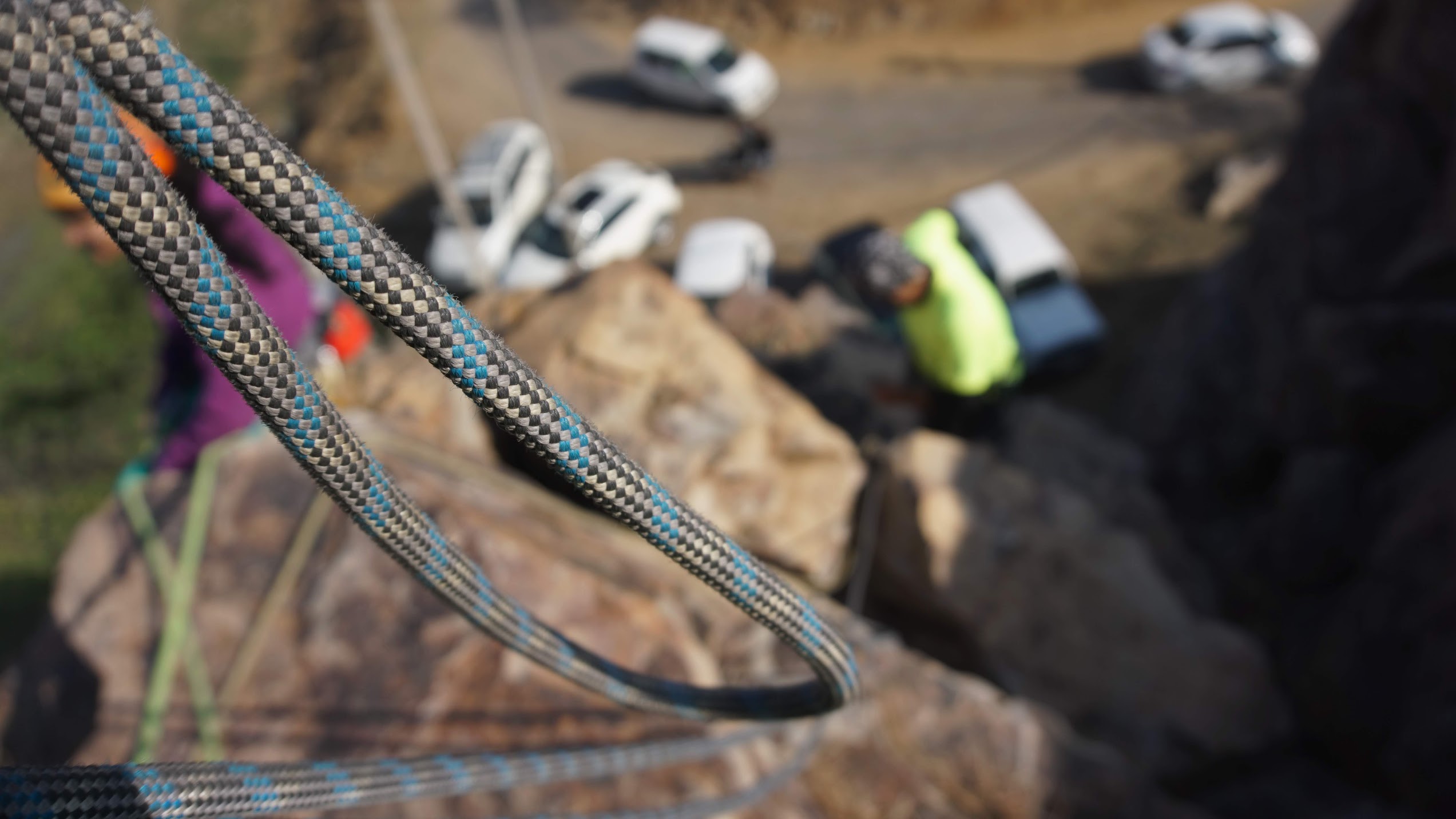