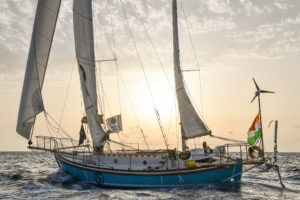 Abhilash Tomy, the first Indian to circumnavigate the globe solo, has been rescued by a French fishing vessel after his yacht dismasted in severe storms, leaving him badly injured.

A severe storm in the Indian Ocean has affected several participants in the Golden Globe Race. 14-meter high waves destroyed the mast of Abhilash Tomy’s yacht, Thuriya, and left him immobilized with severe injuries.

A multi-national rescue mission was coordinated, including rescue efforts from Australia, India, and France. The French fishing vessel, Osiris, reached Tomy first, approximately 3,300km from Perth, Australia. “He is conscious and safe. Rescue efforts were delayed because of 8-to-10-meter-high waves and heavy winds,” a spokesperson for the Indian Navy said. Tomy was rescued from his yacht on a stretcher, and is now being transferred to Mauritius, where he will receive further medical attention.

The Golden Globe Race is a non-stop, around-the-world, sailing race, where competitors are limited to sailing without modern technology or satellite navigation aids. The race started on July 1st, 2018, and is expected to take the winning yacht around 260 days to complete.

Tomy is one of 18 competitors who entered the 2018 Golden Globe Race. He was sitting in 3rd place before the storm hit and rolled his yacht 360 degrees, dismantling the mast and leaving him injured.