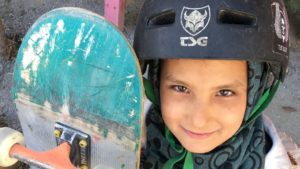 The award winning NGO, which combines skateboarding with creative education, has recently been the subject of an Oscar-winning documentary, Learning to Skateboard in a Warzone (if you’re a girl).

Back-to-School is an accelerated learning program for children who are out of school in Afghanistan. Children attend Skateistan’s Skate Schools for three hours a day, five days and week and cover grades 1-3 of the Afghan national curriculum in just 11 months. Skateistan then enrolls the children in public school so they have a much better chance of completing their education. Of the 93 children who graduated from the Back-to-School program in 2018, 90% went on to complete their first year in formal education. 137 children are currently enrolled in the program.

An estimated 3.7 million children are out of school in Afghanistan, which represents around 40% of the primary-aged population (Unicef). Over 60% of these are girls, who are statistically more likely to miss out on their education due to cultural norms, safety concerns, and poverty. Skateistan reaches out to children who are often excluded from education and sporting activities such as girls, children living with disabilities and those from low economic backgrounds. 47% of the children in the Back-to-School program across Mazar-e-Sharif and Kabul are girls, 100% come from low-income backgrounds and 40% have been internally displaced within the country.

One such student is Laiqa*, who is 11 years old and lives in Kabul. Her family is poor and although her brothers were sent to school, Laiqa had to stay at home with her mother to run the home. Her mother explains that education is not a priority for girls within their culture. Laiqa says she used to see girls in their uniforms on their way to school and she dreamt of being like them. She started coming to Skateistan, whose programs are all free of charge, just under a year ago and she will shortly graduate from the Back-to-School program and be enrolled in a public school in the 4th grade. Without Skateistan, she would never have had the chance to even start her education.

Laiqa said: “I am happy that finally, I am going to formal school, I will be a formal student and I will wear a school uniform. That makes me proud because I will be shown as a schoolgirl.”

Across its programs and locations, Skateistan has just under 2,400 students, just under half of which are girls. By providing a safe space, female educators as role models and teaching both girls and boys about the importance of equality, Skateistan is empowering the next generation of female leaders.

*Laiqa’s name has been changed in accordance with Skateistan’s Child Protection Policy.

All images were provided by Skateistan.