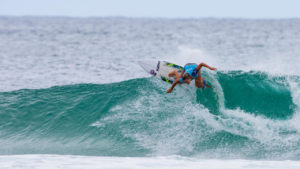 An Introduction to Olympic Surfing, with New Zealand’s Paige Hareb

Learn about surfing's induction into the Olympics, and how New Zealand's top surfer, Paige Hareb, is preparing for the 2020 Games in Tokyo.

The 2020 Olympics will host four new sports that have yet to be showcased on the Olympic stage. Surfing, climbing, karate, and skateboarding will each make their Olympic debut.

The goal of adding these sports is to make the Olympics appeal to a younger audience. International Olympic Committee (IOC) president, Thomas Bach, told BBC Sport that the addition of these events will make the Games “more youthful, more urban, and include more women.”

the decision to include surfing in the 2020 Olympics was unanimous

Surf competitions, have for a long time, been considered controversial. Many surfers disagree about the appropriate surf conditions and technique, which can make judging surfing competitions somewhat subjective. However, with the International Surfing Association (ISA) leading the charge in competitive surfing events, the IOC has finally recognised surfing as a legitimate, organised, competitive sport, ready for its Olympic debut (in fact, out of the 90 IOC members voting, the decision to include surfing in the 2020 Olympics was unanimous).

The format of a surfing competition looks like this: There are usually 2-4 competitors in a heat, with the heat lasting between 20 and 30 minutes. Competitors are judged on the best two waves they catch during their heat. There are five judges who each give them a score out of 10, with the average of the five scores being taken. A perfect score would be 20/20 (perfect 10 for each of the two waves judged). Scoring is based on five things:

Judging surfing is subjective, because different waves may vary in quality between heats, or even within a heat. One way that surf competitions have been able to minimize variation and secure an equal playing field is by holding competitions in artificial wave pools. There had been rumors that the Olympic surfing event might be held in one such artificial wave pool in Tokyo, in order to make it more of an objective spectator sport. However, the ISA has recently announced that the site of the surfing event in the 2020 Olympic Games will be in the ocean at Shidashita Beach, 40 miles outside of Tokyo. Surfing in the Tokyo Olympic Games will be held in a similar format as other ISA surf competitions, but it will have a 16 day waiting period in order to ensure good conditions for the event. Once the event starts, though, there will only be 2 days to finish it.

The Tokyo Olympics will host 20 male and 20 female surf athletes in a shortboard competition. There are five opportunities for athletes to qualify for the Olympics:

“I’ve already made it a goal for me to medal”

TOJ: In terms of preparing for the World Tour and the Olympic qualification events, how will you prepare?
Paige: I have some good people helping me out but I think for this year it might be my easiest and best way to try and qualify for the Olympics by trying to stay on the World tour for 2019, so that’s my biggest goal right now and with a couple of events left this year, I’m on the right track. Whether I go to the Olympics or not, I want to be the best I can be, so I’m always tying and training to be better!

TOJ: Where do you train?
Paige: Most of the year I travel from contest to contest and live out of my suitcase. I try to surf everyday if I’m not flying. At the start of the year I spend a bit of time at home and a lot of time on the Gold Coast, so I get a fitness trainer and coach over there. Then mid year I spend a bit of time in California and have great contacts there too.
It’s hard traveling, you kind of just have to try and make whatever work.

TOJ: Do you do any sport-specific strength training?
Paige: At the start of the season I do but then traveling so much it’s hard to find a gym and good trainers everywhere I go but if you can build a good foundation at the start of the year and then I honestly think that the best training for surfing is surfing!

TOJ: How do train your mind to be at ease under the pressure of high-profile competitions?
Paige: I really like to be in the moment, if I can get myself in the moment and be in the ‘zone’ then it will all just happen. Sometimes I feel myself getting or being nervous or overthinking so some self talk helps me get back to the job at hand and in the moment.

TOJ: If you do end up qualifying for a spot at the 2020 Tokyo Olympics, what will be your goal there?
Paige: If I qualify, I’ve already made it a goal for me to medal, it could be my only chance and I’d love to win a medal for New Zealand! That’s a bit of a obvious answer isn’t it? Haha. I’ll really be trying not to just be another number there haha

“I can’t even imagine what some of the girls and guys will be doing in even a couple of years time!“

TOJ: Event organizers have announced that surfing at the 2020 Olympics will be held on a beach just 40 minutes outside of Tokyo, rather than in an artificial wave pool. Do you think this is the best way to hold the competition and showcase the sport?
Paige: If the waves are fun it will be fine but I’ve been to japan several times now and never really had good waves. I also heard that surfing will get the first three days of the Olympics. I don’t think that’s enough time because it could be flat or just really bad conditions the whole time which would suck for us as surfers, for the fans and just for the sport of surfing in general. Especially when it’s our first time in the Olympics, I think we would love to show people how fun and amazing surfing really can be and I think the best, easiest way is to have it in an artificial wave. I really hope the event organizers change their mind.

TOJ: Have you surfed in an artificial wave pool? Do you think they will help progress the future of the sport?
Paige: Yes I have surfed in the WaveGarden in Spain and also been in Kelly Slaters surf ranch many times now. They are amazing and so fun! I think the best thing about them is you can try the same move over and over on the same section until you get it! In the ocean every wave is different so it makes it a lot harder to do that. To practice over and over like snowboarding over the same big jump on a mountain or hitting a tennis ball down the same part of the court everytime, that’s what’s going to make the future of surfing get better and better and I can’t even imagine what some of the girls and guys will be doing in even a couple of years time! It’s exciting!

TOJ: Who do you look up to in the sport of surfing?
Paige: I think I have to say Kelly Slater. He’s been around forever, I grew up looking up to him and he’s the G.O.A.T (Greatest Of All Time).