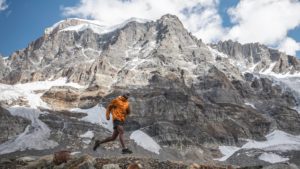 At 6001m, Deo Tibba lies in the Kullu district of Himachal Pradesh, located within the Pir Panjal range of mountains. The route is challenging, with steep exposed areas, open crevasses, rockfall, and glaciers to navigate. And on October 1st, 2020, D’Souza added another first to his list of achievements, completing the climb from the road head to the summit and back in 19 hours and 38 minutes. In 2016, he became the only Indian to finish the Spartathlon, a grueling 246km race from Athens to Sparta.

On a Facebook post on September 30th, he wrote, “Tomorrow I head out for a speed attempt on this beautiful mountain, Deo Tibba. I spent the last 10days getting acquainted with the route. I can surely say that it’s going to be one hell of a crazy adventure. After 15km of technical trails, the route goes up the steep and rocky Duhangan col. It gets steeper on the next section the ‘Ice gully’ and ends with alot of open crevasses and some more steep climbing along the way to the summit at 6001m. I am definitely feeling the nervous jitters for this one. Start is going to be 3 am tomorrow morning. Fingers crossed it all goes smoothly and safe. See y’all on the other side.”

Tomorrow I head out for a speed attempt on this beautiful mountain, Deo Tibba. I spent the last 10days getting…

Speaking with his friend Mohit Oberoi, an Ironman athlete, climber, and owner of Adventure 18, shortly after the run, he said, “The overall time was not much of a concern for me. After the recce, I knew I’d be able to get it done in less than a day. Deo Tibba is the first time I did something where I actually had to use a bunch of mountaineering skills and equipment.

I attempted Deo Tibba yesterday, it’s 6001m, over 20k feet. The idea was to basically do a speed attempt from the road head to summit and back—as fast as possible. I ended up doing it in 19 hours and 38 minutes. We had a support crew on the way for a safety perspective, and for food and whatever else I needed. We had a little base camp which was the main station. And we had a few people at the summit camp who were going to follow me and photograph me.”

Apart from trying to do it as fast as possible, D’Souza elaborated on his goal, “I had gone for a recce on September 18th onwards on the whole route and on the 25th, before heading down, I left all my mountaineering gear on the mountain itself. So yesterday I picked it up. The original idea was for me to do this completely unsupported, with no help. That was a personal goal for me. That’s why I left my gear, clothes, ice axe, and boots on the mountain, and I didn’t want to use any of the fixed ropes on the mountain.”

However, D’Souza did agree to use support from the team as safety is paramount to him. “Because this was a new experience for me, I didn’t want to add unnecessary risk. It’s a big learning curve and it allows me to plan for my future expeditions better. There are so many open crevasses at this time, many steep sections, once you’re getting tired, you still have to climb and the final section is very steep and exposed. The final climb was mostly ice itself. A bit of soft snow but mostly ice on top. Once you’ve been running for 12 hours, everything becomes dicey in these conditions.  Again because this was a very new thing for me, safety was very important, so I roped up for this particular section.”

D’Souza started at 3 am and reached the summit at around 3 pm. He said he spent only 5-10 minutes at the summit, as it was only halfway. “That’s the only time I stopped and sat down, enjoyed the view, had a bite, and took a couple of photos.”

“No one else was moving up and down the mountain, so there wasn’t a whole lot of danger of rockfall. Deo Tibba offered a very different experience where I had to use crampons, and there was a lot more exposure-it added a lot of excitement to it. I barely slept 3 hours last night, I’m still half on the mountain, half off it.”

Featured Image by 4Play, an outdoor adventure media outfit that accompanied D’Souza to document the journey.