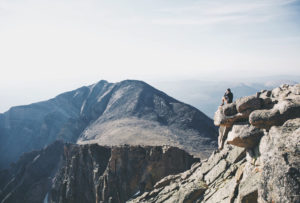 The Legend of Longs Peak, One of Colorado’s Most Popular 14ers

Longs Peaks, viewed from the metropolitan centers of the northern Front Range, is a prominent knuckle of gnarled granite foregrounded by Mt. Meeker’s dramatic east face. The 14,255 foot behemoth is the indisputable crown jewel of the Front Range Rockies, and it occupies a mythic place in Colorado mountain lore. From geologic formation to modern mountaineering, Longs Peak is a hallowed repository of sediment and stories. As Rocky Mountain National Park’s sole 14er, Longs Peak enthralls weekend warriors and veteran mountaineers alike.

An advanced and arduous venture.

Today, social media reveals the mountain’s popularity. The deluge of Instagram summit selfies may boost tourism in the area, but the increased exposure can lure the unprepared to seek the summit, an advanced and arduous venture. Despite the dramatic uptick in Longs Peak tourism and sensational headlines highlighting hiker fatalities, deaths have actually remained relatively stable in the past several decades. In other words, given the increasing number of attempts and steady overall incident count, the rate of fatal accidents has actually decreased.

The legend of Longs begins with its geologic inception nearly 2 billion years ago. The metamorphic schist and gneiss of its slopes evince ancient matrimony of plate movements, intense pressure, and scorching heat. 1.4 billion years ago, magma intrusions cooled and crystallized into Rocky Mountain granite. The latent peaks of Rocky Mountain National Park were comprised of this swirl of sediments, launched skyward 70 million years ago by an uplift. Situated at more or less their current elevations, the mountains developed sharp precipes, veined grooves, and deep cirques by way of glaciation. The famous Diamond face of Longs Peak, a shear wall anchored by Mills Glacier and illumined by rosy morning alpenglow, is testimony to the carnal power of erosion. As Colorado’s northernmost 14er, with a summit as large and flat as a football field, Longs Peak dominates the surrounding skyline and calls adventurers to its heights.

It’s born a handful of names and millions of bootprints. To the Native Americans, it was Nesotaiuex—the Two Guides. After they were driven from the plains into the mountains by white settlers in the early 19th century, they reportedly caught eagles from its crags, using their feathers for adornment. French trappers proclaimed it Les Deux Oreilles, or Two Ears, a reference to its forked summit. Isabella Bird, who became the third woman ever to summit the peak, dubbed it both the “Mont Blanc of Northern Colorado” and the “American Matterhorn’’ in her 1879 autobiography A Lady’s Life in the Rocky Mountains. The enduring moniker, Longs Peak, is a nod to Stephen Harriman Long, an explorer who became the first American to sight and describe the mountain for the government in 1820. Major John Wesley Powell notched the first official ascent of the peak on August 23, 1868, commencing a flood of summit fever that would swell in volume over the next century and a half to the 10,000 annual total that attain Long’s pinnacle today. Most summit bids trace the standard Keyhole Route, which necessitates exposed scrambling and ascends 5,000 vertical feet in 7 miles. Unprepared hikers may find themselves getting more than they bargained for, but that hasn’t deterred the crowds.

The lure of Longs is understandable—the trailhead is just 90 minutes from Denver International Airport and the standard Keyhole Route to the summit is doable for most fit, prepared hikers in a long day. Though its reputation as a non-technical challenge and proximity to big cities makes it one of Colorado’s most popular 14ers, the sheer number of summit attempts has also made it one of the country’s most deadly hikes, according to an Outside Magazine article from 2014. Spokeswoman Kyle Patterson says that Rocky Mountain National Park runs the third busiest search-and-rescue operation in the Park Service, and 20 percent of their efforts are concentrated in the Longs Peak region. Since 1884, Longs has claimed 67 lives, with over 70% of fatalities resulting from a fall. This past summer was particularly deadly, with four hikers losing their lives on or near the mountain. 2018’s fatalities, combined with ten others since 2010, make this past decade the deadliest ever in recorded history, eclipsing the 13 deaths of the 1970s. But to take these statistics at face value would be to misjudge the threat.

By some estimates, over 25,000 hopefuls set out from the trailhead every summer—less than half of them summit. Just a sliver of hikes end in fatalities, but as overall trail traffic increases, so do overall incidents. A dive into the decades reveals a small increase in fatalities, but that increase comes with a caveat:

The caveat: Summit attempts have increased assiduously, tracking overall park visitation. In 2017 alone, Rocky saw 4 million tourists–that’s a 40% uptick since 2014. According to Patterson, around 10,000 hikers hit the summit in 2002. Those numbers are based on a research project undertaken from May through October of that year. Successful summits have likely increased in the following two decades. But fatalities haven’t skyrocketed. If incidences tracked overall attempts, Longs would be on the short-list for the world’s deadliest mountain. The executive editor of the American Alpine Club Dougald MacDonald suggests that “visitation has roughly doubled in the last fifty years,” but, coincidingly, “there certainly has not been an enormous surge in fatalities”. The most remarkable characteristic of recent fatality reports is their scantiness, given the crescive swell of summit-seekers.

Given the increasing number of attempts and steady overall incident count, the rate of fatal accidents has actually decreased.

What might be heralded as a triumph of public safety is often diluted by headlines corroborating Longs deadly legacy. Bernard Gillett, local climber and guidebook writer, remarks that “Accounts of deaths in the media are sensationalized; that’s what sells newspapers and increases advertising revenue”. This past year’s fatality reports contributed to the sentiment of increasing peril, with four highly publicized search-and-rescue operations carried out by the park service in the Longs Peak area. This task force, working tirelessly behind-the-scenes to keep visitors safe, is most visible during times of crisis.

Patterson says that the Longs Peak rangers rely on the current infrastructure to limit crowding on Longs. “Due to the size of the parking lot at the Longs Peak Trailhead as well as spillover parking on the County Road, parking is limited,” she reports. The lot is at capacity most days mid-July through early September. “Compared to ten years ago, there are more weekdays now that the parking lot is full, so overall attempts have likely increased,” she continues. But parking space hasn’t expanded in a decade, enforcing some semblance of carrying capacity. For now, that’s the slyest ace up the forest-green sleeves of the Park Service.

Rocky Mountain National Park personnel implemented an interdivisional task force in the Longs Peak area in 2011 to address the still-daunting crowds who do find parking. They’ve orchestrated a robust safety outreach program, both online and on-site. They added a signpost in the Boulderfield, 1.5 miles from the summit, to warn hikers of the perils ahead. “We also are concerned with the increase of social media, websites, and “trip planning” sites that highlight experiences and photographs, but often do not provide accurate information or safety messages and very little context as to overall preparedness,” Patterson disclosed.

More tourism is a boon to local business, but city-sponsored events may attract summit-seekers who underestimate the extreme mountain environment.

Safety on Longs Peak may be a feather in the felt caps of the Park Service, but overcrowding in Rocky Mountain National Park (RMNP) is a pressing concern. The annual 4 million that tromp the trails bring in big revenue, at the cost of congestion and crowding. “RMNP benefits from the increase in the number of visitors,” Gillett opines. “[They] get to keep 80% of the revenue generated from the park entrance fees, with the rest distributed to lesser-visited parks in the National Park System.” To the city of Estes Park, which functions as the gateway to RMNP, more tourism is a boon to local business. Park-goers buttress the economy, and as such, “[they’ve] got a huge incentive to bring as many people to the Park as they can,”. Gillett says that in the past 40 years, he’s noticed an uptick in city-sponsored events catered to out-of-towners. “It used to be that the town got pretty quiet once summer was over and everyone went back to school.  But now there’s an event every weekend in September, and its spilt over into October and even the middle of winter.” Now, even in the winter months when average daytime highs are a brisk 25°, the Longs Peak Trail sees a respectable stream of snowshoers. The winter warriors and summer hordes are good business, but the exposure may attract summit-seekers who are, in Patterson’s words, “unprepared for the conditions on Longs Peak and underestimate extreme mountain environments”.

The “Longs Peak Superhighway” of headlamp-clad hikers huffing upward in the predawn darkness of most summer mornings is both spectacle and scourge. Trail traffic, remarkably congruous to car congestion on popular Trail Ridge Road, is an inevitability of a Park as popular as Rocky. Longs is and will continue to be one of Colorado’s most popular 14ers; those vying for solitude on the northern giant can try their hand at one of the less popular routes, which see just a fraction of the traffic as the classic Keyhole route and offer sustained, exposed scrambling. Whatever the route, diligent preparation and smart decision-making are mandatory to safely enjoy the legendary Longs Peak.