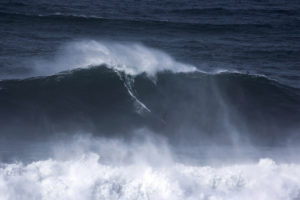 The height of the wave was confirmed by The Portuguese Surfing Federation´s Technical Director, Miguel Moreira, “This is the female record. There is no doubt about it.”

Gabeira grew up in Rio de Janeiro, Brazil, where she started surfing at age 14. At age 17, she moved to Hawaii to pursue her passion for surfing. Supporting herself with two different waitressing jobs, she still managed to find enough time to train, and on February 6th, 2006, rode her first big wave. A 35-foot tall wave at Waimea Bay, on the North Shore of Oahu, marked the beginning of many big waves that Gabeira would surf.

A wipeout broke her ankle, herniated discs, ripped off her lifevest, and left her face-down, unconscious in the water.

Gabeira has surfed waves all around the globe, including Indonesia, Australia, South Africa, Northern California, and Tahiti. Her mentor, Carlos Burle, also of Brazil, introduced her to tow-in surfing, which has given her the means necessary to surf some of the world’s largest waves. Gabeira is a 5-time World Surf League Big Wave Awards winner, as well as the winner of the 2009 ESPY Best Female Action Sports Athlete Award.

In 2013, Gabeira had a near-death experience while surfing big waves in Nazaré, the same place she set the world record. A wipeout broke her ankle, herniated discs, ripped off her lifevest, and left her face-down, unconscious in the water. She was rescued and resuscitated on the beach.

Despite this brush with death, five years after her crash, the Brazilian surfer completed her comeback. On January 18th, 2018, Gabeira realized her goal of surfing the world record largest wave when she successfully towed onto and rode a 68-foot tall beast.

Gabeira knew this wave was a women’s world record, but she wasn’t receiving recognition for it. The World Surf League and Guinness World Records has previously only recognized and awarded the big wave world record to men. Gabeira was fighting for a women’s category as well. “It is essential to have a separate record,” Gabiera told The New York Times.

In order to gain recognition as a world record, the World Surf League must first approve. Gabeira attempted contacting the organization, but received no response. She traveled to their office in Los Angeles and spoke with them directly. For several months her request was ignored. She eventually took matters into her own hands by enlisting the help of her fans and followers on social media.
The following is a quote from a video she posted to Facebook, asking for help with a petition to the WSL for a separate female world record category.

“Hello, I’m Maya Gabeira. I’m a big wave surfer from Rio de Janeiro and I need your help. On January 18, 2018 I achieved my life’s goal of surfing the biggest wave a woman has ever surfed.
In order to establish a world record, I need the World Surf League to certify the measurement of the wave. For some reason, the WSL has ignored my request. Please sign this petition to ask the WSL
to recognize a world record for women in big wave surfing!”

The petition received more than 18,000 signatures, and caught the eye of the WSL.

On October 1st, 2018, Gabeira won her fight and was awarded the Guinness World Record.

“Women have to fight to get their space where it’s supposedly just a man’s world. So, if you scream loud enough then you get heard. And that’s what happened.” Maya Gabeira explained to Public Radio International.