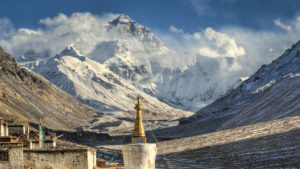 COVID-19: Everest to close for climbing as Nepal cancels all permits

Amid coronavirus concerns, the government has shut down Everest, suspending all expeditions for climbers.

Following China’s decision to cancel all permits for expeditions on the north side of Everest, Nepal’s government just announced all climbing permits will be cancelled from March 14th to April 30th. Typically, Nepal earns around $4m through Everest climbing permits every year, with individuals paying upwards of $11,000 each. Last year, Nepal had a dangerous overcrowding problem on the mountain, after issuing too many permits, with around 885 people summiting the mountain. The main window of good weather, which is slim, opens up between late April and the end of May, causing a rush on the popular route.

Dawa Steven Sherpa, a prominent mountaineer and CEO of Asian Trekking, told The Outdoor Journal, “I just came back from a meeting with the Director of The Mountaineering Section at the Department of Tourism, Ministry of Culture, Tourism and Civil Aviation. It’s confirmed that they will not provide any Mountaineering Permits in Nepal for this spring season (March, April, May). Furthermore, in front of myself, she instructed the SPCC manager to stop the Ice Fall doctors from opening the route on the Icefall (on Mt. Everest) and return back from base camp.”

The notice, issued by Mira Acharya, the Director of the Mountaineering Section of the Department of Tourism, read, “This is to notify that climbing permits for the expedition that have already been issued or to be issued for the spring season 2020, have been halted to the present, in accordance with the decision made on 12th March, 2020 by a high level committee chaired by the Deputy Prime Minister, Government of Nepal.” Yogesh Bhattarai, the Minister for Culture Tourism and Civil Aviation said, “The government has decided to suspend all spring expeditions and scrap permits for the time being. The decision can be reviewed after analysing the global scenario over the coming month”. 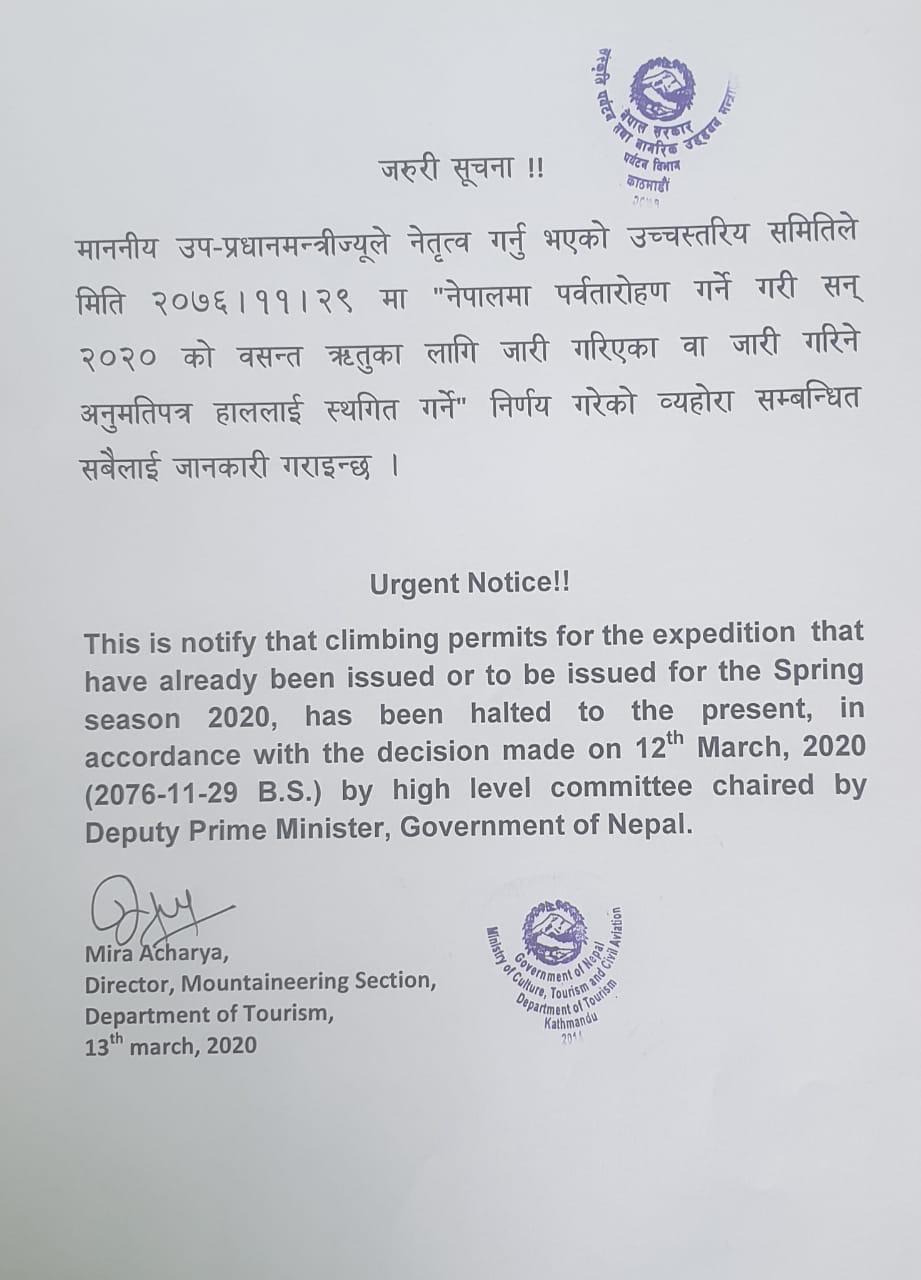 Just three days ago, the Himalayan Times reported that the Icefall doctors left for base camp to open the Everest route. The eight member team left to fix climbing routes up to camp 2 by fixing ladders and ropes, to be ready for the main climbing season. The publication claimed, “Though many climbers from Coronavirus-hit countries have already cancelled their bookings for different expeditions in Nepal this season, expedition operators said that there would be a significant presence of the world climbers as many will also be switching to Nepal route from Tibet this season. Amid COVID-19 scare, there will be more than 30 teams in the world’s highest peak this season”.

Adrian Ballinger, an IFMGA/AMGA mountain guide and founder of Alpenglow Expeditions, a prominent mountain guide company that offers rock climbing, backcountry skiing and international mountaineering expeditions all around the world, told The Outdoor Journal, “After China closed Everest, we were hoping Nepal would do the same thing, and we support this responsible decision”. Ballinger moved Alpenglow’s Everest trips from Nepal to China five years ago, amid concerns of the government’s handling and safety over the overcrowding problem on Everest. However, his outfit still runs other expeditions in Nepal. “People and organisations are definitely upset and angry over the ban as this has huge financial repercussions. We have several international and local guides—we’re keeping them informed and updated, while making sure they get paid part of their wages. It’s heartbreaking as many of them work paycheck to paycheck and sometimes earn more than ten times the average Nepali wage.” Ballinger stated that as Everest workers, he and his team are quite familiar with the temperamental nature of the Everest season—from the earthquake in 2015, to the icefall avalanche in 2014, to the Olympic torch on Everest in 2008. This would be the fifth time in 13 years that they’ve had to cancel or postpone Everest trips. “We take risks that are physical and financial, and in this case, everyone suffers. Apart from Everest, we run over 35 trips around the world, and we’ve cancelled all our April bookings, including to Africa and Ecuador. We hope this fall is safer, and that we can resume Himalayan expeditions to Cho Oyu and Ama Dablam. Several trips will roll over to 2021.” Even though the situation may seem bleak, Ballinger has a positive outlook—“COVID-19 is obviously the main problem, but once everything settles maybe we can take this opportunity to address overcrowding on Everest. It’s always been a problem and this will allow us to take a break and in the meantime, hopefully we can figure out common sense regulations, while Everest gets a rest”. 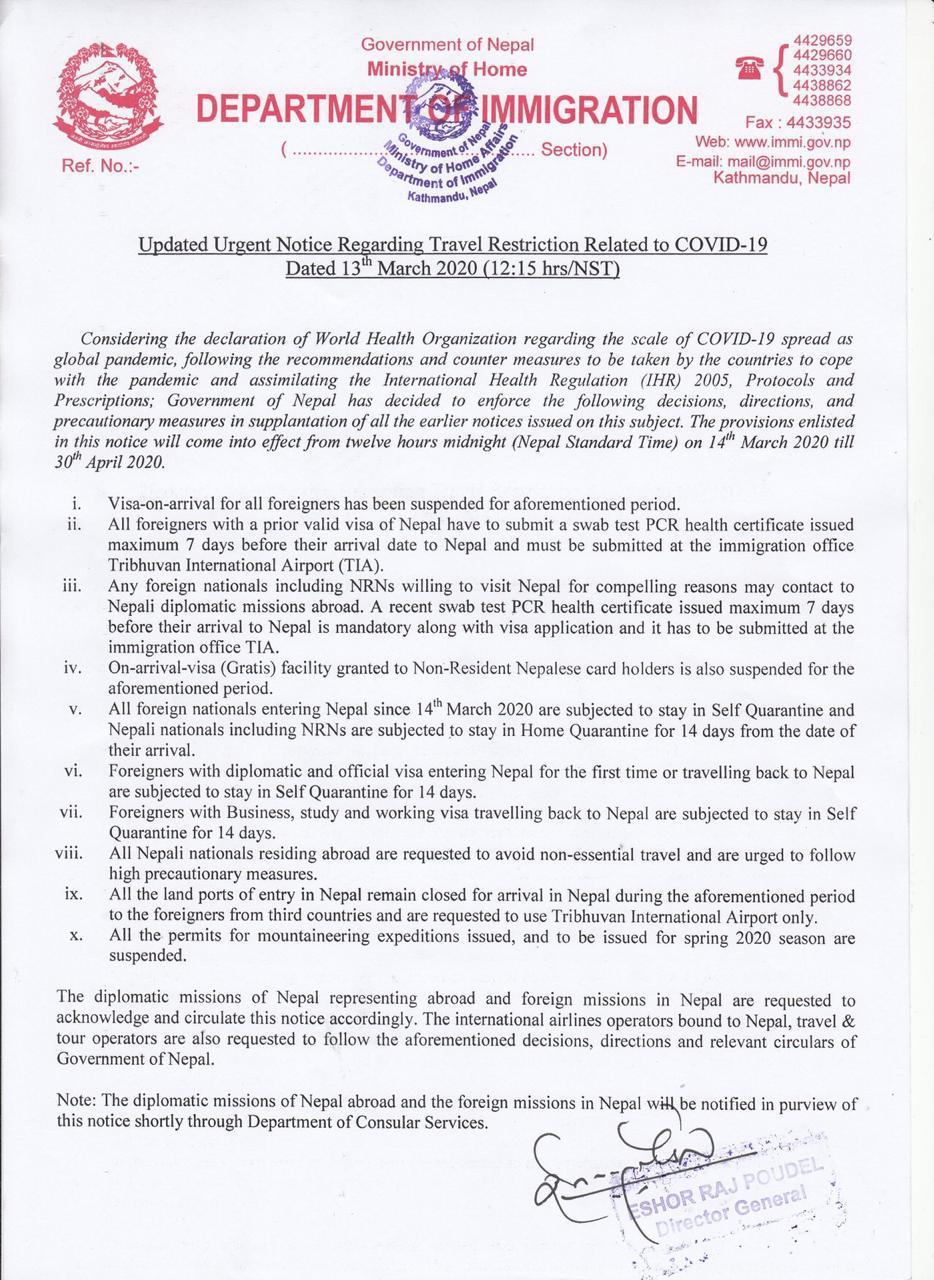 Ashok Pokhrel, President of Nepal Association of Tour Operators (NATO) told The Outdoor Journal, “Since visas on arrival have been suspended across the board and anyone applying for a visa must also submit a CPR test result less than 7 days old, no one is going to qualify anyway so, yes, the decision gives clarity to what could have been a highly confusing situation.”

Owing to the coronavirus outbreak, on February 29th, the government suspended the Visit Nepal 2020 campaign of the Nepal Tourism Board—a national development strategy to promote tourism in the country. Visit Nepal’s commitment included a focus on climate change, integration of conservation, green initiatives, as well as development with minimal impact on the environment.

Guy Cotter, the CEO of Adventure Consultants, the adventure company known for pioneering the commercialisation of Mount Everest, told The Outdoor Journal, “I think it was prudent for Nepal to close its borders. It does not have the medical capability or capacity to handle an outbreak of an epidemic. With a vaccine some time away the only way for Nepal and other countries to keep their populations safe is to keep the border restrictions enforced until there is the opportunity to vaccinate”.

Speaking on how the crisis will affect the adventure travel community, he said, “The issues created through the spread of COVID-19 is disastrous for people in the adventure travel industry if they are without work for more than a few months. Unless people have savings or another job they can transition into, we will see many businesses fail and we will see individuals struggling to feed themselves and their families. If airlines also fail through their inability to operate then we’ll have an extended latency period before travel is affordable again and tourist numbers can raise to previous levels. When normality does return we will see a trend towards discounting merely for operators to get some cash-flow again but it is important for travellers to not exploit this situation.”

Apart from closing Mount Everest, the country also launched vast restrictions on people entering the country—visas on arrival suspended from March 14th until 30th April, all foreigners with a prior valid visa of Nepal will have to submit to a swab test and health certificate at the immigration office to prove they aren’t infected, and all foreign nationals entering the country within this period will be subjected to stay in self quarantine.

So far, Nepal has one confirmed case of coronavirus. According to WHO, more than 125,000 people have been diagnosed with COVID-19 in 118 countries, with the total number of deaths above 4,600.