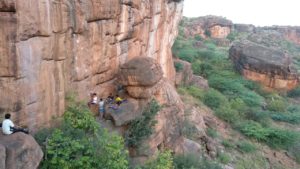 Arguably the hardest sport route ever climbed by a female climber in the Indian community, Siddhi Manerikar has set the bar higher for her peers by climbing a 5:13b/8a route in Badami.

Note: As there are not any records, it’s difficult to validate that Siddhi Manerikar has broken a World Record for Indian Female Climbers. However, The Outdoor Journal is not aware of another Indian Women who has matched this feat.

Siddhi Manerikar started climbing when she was in the 8th grade. There was a 43-foot high climbing wall in her school that she spent two hours a day training on.  Last week, Siddhi Manerikar redpointed Samsara, a 5:13b/8a route in Badami.

Siddhi has raised the bar and showed what is possible for those willing to push further. The Outdoor Journal caught her to talk about climbing Samsara, the process and the inspiration behind it. 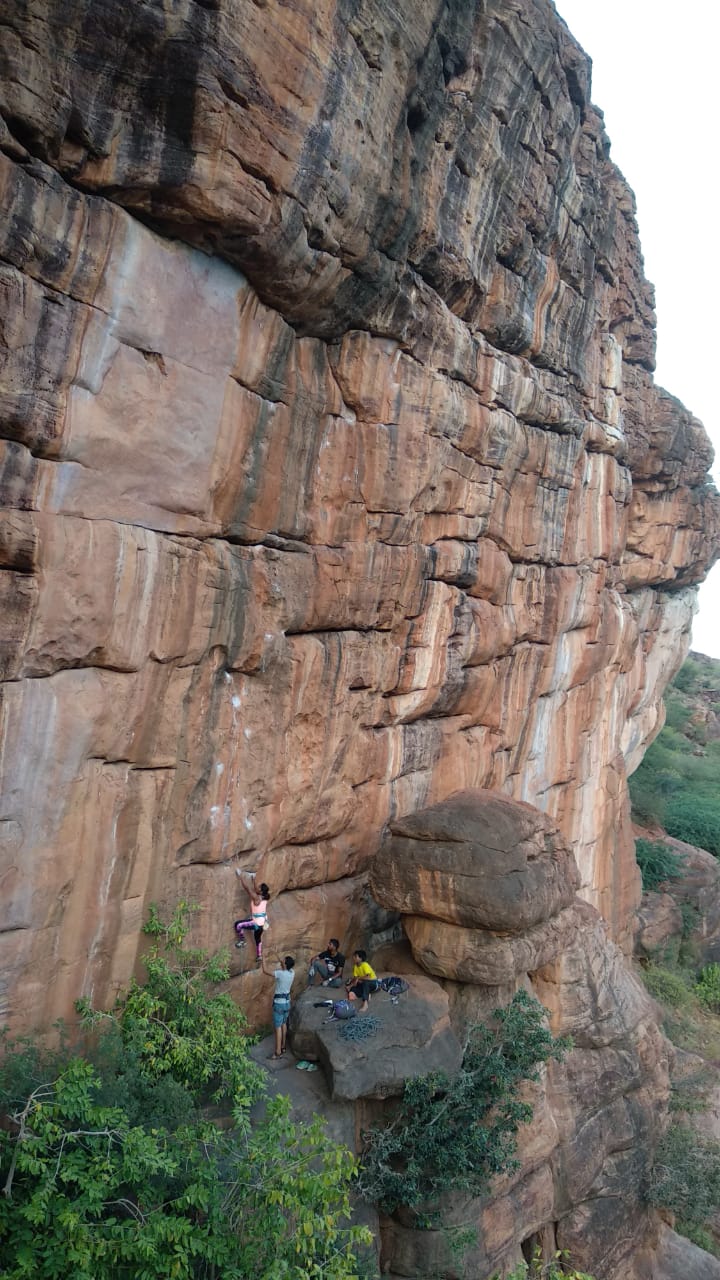 “It wasn’t really a project or something specific that I had in mind. I just happened to give it a shot while I was there. I was a participant in Badami Training Camp back in 2010: an event for national climbers before being picked for the Asian Youth Championships. Between 2010 and 2013, I went to Badami almost every year and worked on some relatively easy routes. One of the higher grade routes, called Ganesha, had been attempted mostly by men. Up until then, I hadn’t really tried any 8a routes.

This year I decided to train in Badami. It has been four years since my last visit. I wasn’t really satisfied with my performance and felt that it had deteriorated last year and so I had a lot to catch up to. The first two days I climbed easy routes, when some of my friends asked me to try Samsara.

“I returned and placed my focus entirely on Samsara”

Dhaval Sharma, another climber from Pune who had recently sent Samsara asked me to give it a push. He said that I had the strength and endurance for it. It was on the 5th of November when I finally went for it. To my surprise, I was able to connect all the moves till the top. And that further cemented the confidence in me more than anything else. Also, I didn’t have enough time like others who had sent it over two to three trips and so, I concluded that it was either now or never. For the next two days, I returned and placed my focus entirely on Samsara on top-rope and was able to eventually send it.” 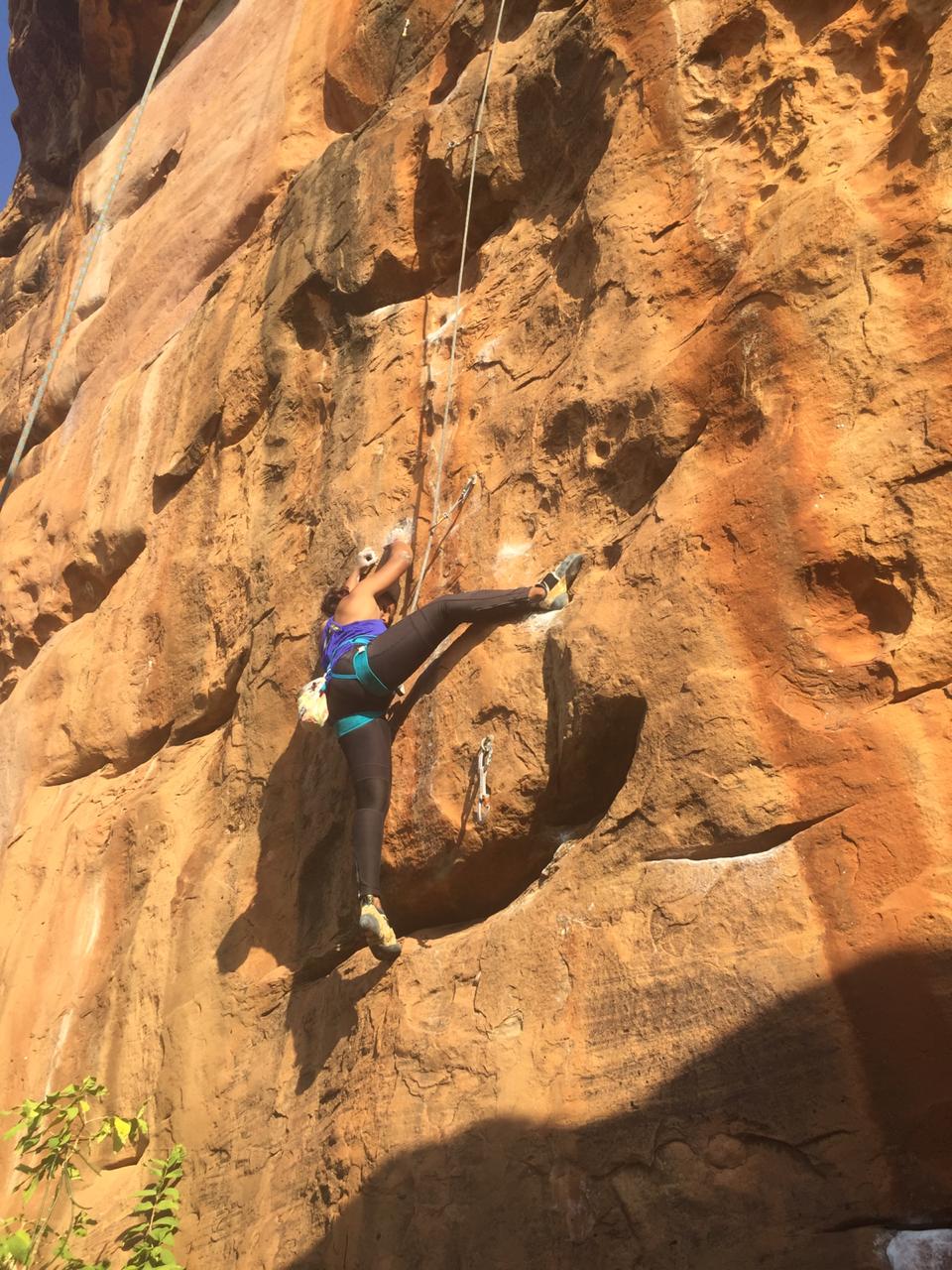 Could you share the process behind setting yourself against such a challenging route? How was the crux like?

“I was really pumped.”

“I have been scared of falls since 2015 when I had sustained an ankle injury. On this route, I concentrated on the first three clips and also the last one, which are also the crux moves.  Also, between the fifth and sixth clip, it was kind of a long run out and I wasn’t comfortable falling there. The last clip also came loose when I attempted the route in the evening. Shortly after, I re-attempted and took a two minute pause before the last clip; I had to because I was really pumped.”

How long have you been participating in competitions and what’s your journey been like?

“I have been participating in competitions since 2010 and have mostly been a sport climber. Before this, I have never worked on natural climbing projects. This was certainly a good experience and exposure for me.”

Having climbed Samsara, do you feel any different now?

“Nothing except the fact that I now believe I am capable of executing projects.”

Do you have any other interests apart from sport climbing?

“Dancing and badminton were there, but I somehow always managed to get back to climbing. Whatever time I was left with after studying, I used to channel it to climbing.” 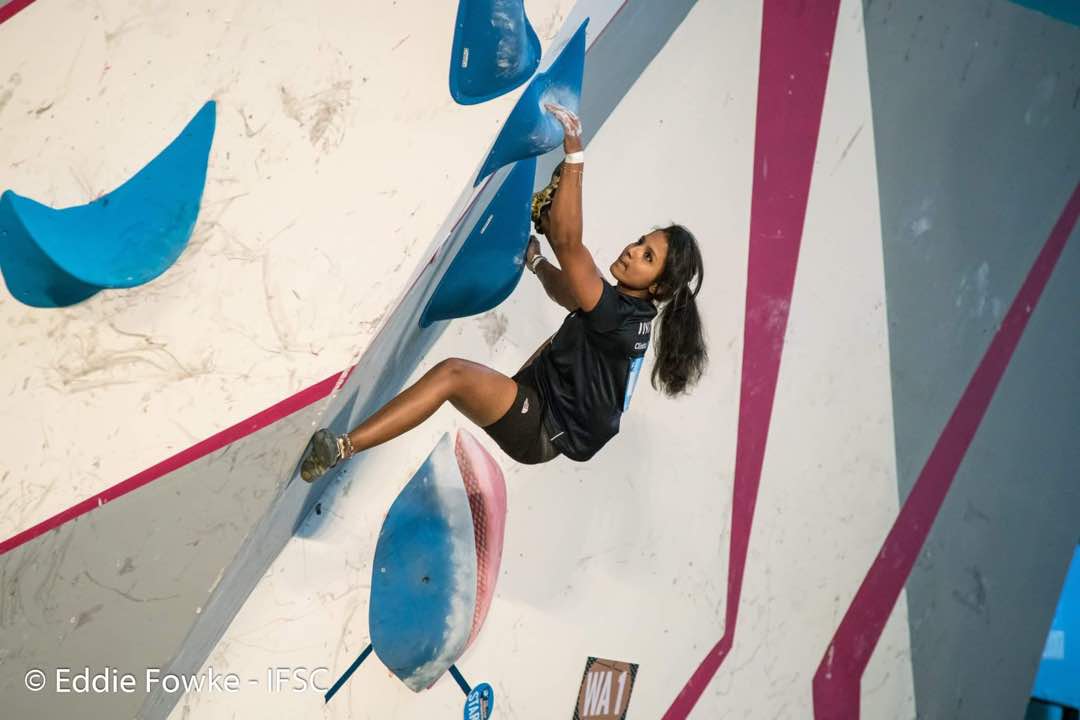 Do you have any role models? If yes, who and why?

“If you have the mindset, dedication and willingness, no one can stop you.”

“Philippe Ribiere and Kim Ja-in. I first met Philippe Ribiere in 2011 at a girivihar competition in Navi Mumbai. I was surprised to see him climbing with his physical disabilities. It simply made me question myself, “If he could do it, despite the physical challenges, why couldn’t I?”

Kim Ja-in because she still participates in the world cup and is also married. It hasn’t influenced her career or lowered her ranking. I remember being told rather impudently that my climbing will suffer once I get married. It made me very angry. If you have the mindset, dedication and willingness, no one can stop you.”

You have set a benchmark for all the fellow female climbers in India, what are you looking at next?

“After having sent that route, I received a few calls from friends from the community who expressed their warm praise of the climb. I am glad to have contributed back to the community by setting an example. It makes me happy that other female climbers will take this as an inspiration to further push themselves and pursue such projects. I look forward to undertaking many more projects in Badami as well as in other parts of India.”