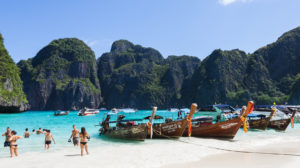 Paradise is Closed, Indefinitely: “The Beach” is Shut Down to Tourists.

The Koh Phi Phi National Park’s department has issued an indefinite closure to Maya Bay, once a tropical paradise made famous by Leonardo DiCaprio’s film The Beach, now ruined.

The reason for the closure isn’t because of a hidden cache of marijuana plants, unruly drug smugglers or a lawless community of outcasts, as fictionalized in Alex Garland’s book, then turned into a movie starting Leonardo Di Caprio. Instead, the closure will be enforced to allow the fragile marine ecological system to recover from the damage caused by millions of tourists.

In the film, Leonardo DiCaprio’s character, a young traveler named Richard, finds a map to a legendary island paradise that sounds too good to be true. Nevertheless, Richard sets out in search of this unspoiled paradise that lacks the degeneracy of civilization. Since the film’s release, visitors from around the world have flocked to Maya Bay – the film’s location – in search of such a paradise. But this rampant over-tourism has taken its toll on the ecosystem.

Rampant over-tourism has taken its toll on the ecosystem.

The film’s themes do materialize through the Maya Bay closing on Koh Phi Phi Leh island. First, “things aren’t always as they seem.” In the film, the small community that has settled on the beach appears utopian at first until unethical, even murderous choices are made. To make a connection, travelers to Maya Bay book their trips based on idealized photography fit for computer desktop wallpaper, hoping to snap the perfect shot for their Instagram feed. Yet when they arrive to the beach, shuttled like cattle hundreds at a time through trash-filled water, past unhygienic toilets, their illusions of a paradise are shattered.

One of the main tenets of the post-societal community in The Beach is to limit visitors at all costs. All members can agree that more people equals more problems. Similarly, more tourists have led to overwhelming environmental degradation in Maya Bay.

Each day, tourists are brought in via speedboat from nearby Phi Phi, Phuket and Krabi in the hundreds and even thousands. One recent traveler (and Leo enthusiast), Aubrey Romp, shared her disappointing experience with The Outdoor Journal. “We signed up for a boat trip from Krabi on the mainland. The boat couldn’t find space to reach the beach so we had to swim to shore. It was super crowded. People pretty much took the stereotypical selfie and then sat on the beach. The only time I left the main beach was to go to the public toilet which was dirty and gross. Nature was ruined by overcrowding.”

Thai authorities initially announced a planned 4-month closure starting in June, but have now extended the closure indefinitely. According to The Guardian, it’s estimated that more than 80% of the coral around Maya Bay has been devastated by mass tourism. Because coral grows at a cosmically slow pace of less than a centimeter per year in many cases, the Maya Bay closure could remain in effect for years.

Read Next on The Outdoor Journal: Adventure Tourism in India Leading to Deaths and Massive Environmental Degradation