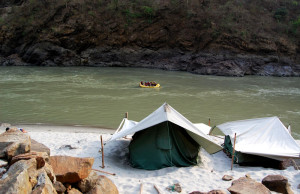 A Ban on Rafting and Poor Governance in Uttarakhand

Rafting has vastly boosted the local economy. The government didn’t provide these jobs, but has benefited from them. If not thankful, the state could have been a little mindful.

The recent and total rafting ban, four years after a ban on rafting camps, has stirred uncomfortable conversations in the adventure community. Perhaps it’s time that we all learnt a lesson.

Here’s a good place to start: Eco-tourism is sustainable, helping the environment and the local community. Mass tourism is damaging and inconsiderate, usually with a detrimental effect on the natural environment.

Adventure sports can be integrated either sustainably or unsustainably. It largely depends on how they are introduced and handled by the regional government and the local community.

“Rafting is a self-generating business; people have found employment by themselves.”

The natural environment in Uttarakhand has a lot to offer as a peaceful retreat and a source of income, in ways that are respectful to nature and sustainable for the community. However, the government’s disorganised approach, focused on short-term-benefits, has landed this state in much trouble. Government bodies have legislated regulations and policies without consideration for a longterm strategy.

“Rafting is a self-generating business; people have found employment by themselves. The government gets taxes from the local development, but receives a lot more money from power and road projects. Comparatively, it’s not worth their time. They look at the bigger fish,” tells Pradeep Raj Singh, Founder of Paddy Adventures.

Recent Public Interest Litigation (PIL) filed in courts serve as warning signals against the impact of mass tourism. This is clearly the time for thoughtful organisation and constructive dialogue.

Both of the recent PILs led to court orders without advance notice. Detailed surveys of existing ecological footprints were missing and local employment was not considered.  The recent ban was imposed without taking into account that over 40,000 people are directly or indirectly employed by 280 rafting companies.

“Currently, there is no right leadership in the state. But there’s a lot of scope. You just need the right kind of approaches and perspectives.”

“We were given a permit every year to do adventure sports for 18 years, with listed rules and regulations,” laments Vipin, Founder of Red Chilli Adventures. “Yet the high court puts an order and asks the government to show the papers for rafting regulations. We personally lost business of 5-6 lakhs and I paid for those losses from my personal savings. It didn’t just affect the ones who own rafting companies, but also impacted the vegetable sellers, the hotel businesses, and transportation companies. Not just the rafting companies, but everyone lost business. For us, rafting is not even about business; it’s more of survival. The government has no jobs for people.”

“There were so many PILs filed in the previous years, but nothing was done about them. Something like this was not required. There could have been a time limit, like a month’s notice. If the government didn’t submit sufficient documents, then they could have imposed a ban,” adds Pradeep from Paddy Adventures.

Both Pradeep and Vipin are rafting instructors who have been in the industry for over twenty years. They feel that the potential of organised and responsible tourism in Uttarakhand is untapped largely due to poor leadership, especially when compared to states like Himachal Pradesh and Rajasthan.

“Currently, there is no right leadership in the state. But there’s a lot of scope. You just need the right kind of approaches and perspectives.  The first step needs to be taken properly but the first step is not happening. This recent ban is a big opportunity for that first step to take place,” shares Pradeep.

“They could have had a conversation and investigated more to see what’s there and what’s not before imposing the ban. Fortunately, Uttarakhand tourism has taken advice from rafting companies, including my own, to make some amendments in the policies. One was regarding rafting companies using smaller vehicles to carry big rafts. The other was about the training of guides to include mandatory first aid course and swift water rescue training,” adds Vipin.

“Now, before the season starts, things are looking positive.”

Globally, national parks are generally preserved and adventure sports are permitted in nature. There are rules, procedures, training, and guidelines in place. People are given the freedom to benefit from nature in a responsible manner, and the state largely plays the role of an enabler and facilitator. In a nation that truly cares about nature and understands its crucial role in sustaining the human population, the desire to protect the forest would come naturally. It would also take charge of communication that helps educate the population about the importance and benefits of acting responsibly.

The rafting season is about to start in Uttarakhand. Many are hoping that the court will reconsider the report submitted by the tourism board, and lift the ban.  Members of the recent meeting, who are senior rafting guides in established companies known for good compliance, addressed existing loopholes in the recent report.

“Right now everyone is sitting idle and waiting for something to happen. The ban was imposed in the wrong way, but luckily it was at the end of the season. Now, before the season starts, things are looking positive,” shares Pradeep.