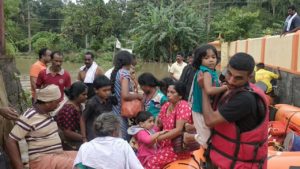 Despite endless setbacks, this group persevered and risked their own lives by swimming up to 12km at a time, to convince people to climb into their rafts and abandon homes to the rising water.

A pregnant woman sent out an emergency call during Kerala floods and AT Rovers, a motorsport and adventure team, were on their way – Swimming 12km at a time. AT Rovers got the call when no one else was able to reach such an isolated location. Snakes and debris were in the flood water, as they traversed submerged paddy fields and roads. The final leg of the rescue was the hardest, as the water got deeper in darker surroundings. Not knowing what they were swimming towards, unaware of the creatures that might be in the water, the team finally reached the remote village they were targeting, near Thiruvala.

“We couldn’t get on the raft since it had to be kept dry. Instead, we carried the rafts with us while swimming 12 km to reach the place. It was so scary out there,” recalls Abraham, the founder of AT Rovers, who had to keep the raft dry for the pregnant woman.

Once the team reached the location, the pregnant woman refused to be rescued, telling them that she had only called because of a high fever. Instead, she wanted to stay, hoping that the water levels would go down, but she had no idea that the water was rising and extended up to a radius of 12 km. Despite informing her of this, she still didn’t want to leave her home and the team had to give up. On their return, they did manage to rescue a few other people on their way.

“The biggest challenge we faced is that people were reluctant to get into the vehicles because they were scared.”

AT Rovers were founded as motor sports company, with a focus on rallying. However, when help was needed, they stepped up and played a significant role in rescue operations during the Chennai Floods and the recent Kerala Floods. When the Chennai floods happened in 2015, they were called in for the relief operations to supply food materials. “Once we reached Chennai, we understood that our role is not in carrying relief materials. Our vehicles were more capable, so we started rescue operations there,” says Abraham.

During the recent Kerala floods, AT Rovers didn’t give it a second thought and again jumped back into their search and rescue role.

“We had 14 vehicles, and we lost a few on the way. But spirits were way too high and our entire team of 30 people (15 on the ground) were really passionate,” says Abraham.

These were not the only setbacks, and rescue operations were on the verge of closing due to logistical difficulties, but their cause was soon saved via social media. The team had started the mission with a few four-wheelers and two rafts but within a couple of days, they lost both the rafts.  The only option was to abandon the mission, since rafts became essential for the rescue operation. Their social media page was updated with the same information.

“That was a positive sight, in a way. Families rarely sit together in these times of Internet, TV and cell phones.”

That’s when the Navy reached out to them and offered life rafts. The only catch was that it was in Kochi, at a time when all airports and roads were closed and the only transport option was the cargo railways. With social media support, an individual picked up the raft from the naval base, delivered it to the railway official, who then handed it over to AT Rovers in Trivandrum. Kayak Adventures also offered help through the social media page and sent one of their rafts.

With a lot of support, now they were equipped and ready to get back in the field, convincing the pregnant woman to leave her home.

“The biggest challenge we faced is that people were reluctant to get into the vehicles because they were scared. They didn’t want to leave their homes abandoned. They wanted to stay back,” says Abraham.

Perhaps, it’s hard for human beings to let go even while facing severe calamity. Maybe, they thought of the future and the challenges they would face after the floods, without a home.

“Until 7 pm, the situation was still manageable. Then they opened the dams on the night of 16th August, and the water came in like the ocean.”

AT Rovers ended up saving 43 people including a 6-month old infant. They were on the mission for almost 2 weeks, and returned to Trivandrum daily from the worst affected areas, to service their vehicles. There were some other people that they weren’t able to find, but fortunately managed to survive none the less.

When rescuers from AT Rovers were driving and rafting around the flooded regions in Kerala, Abraham, the founder, noticed a family. They didn’t seem to be in any immediate danger. With a candle light, they sat on the balcony talking to each other.

“That was a positive sight, in a way. Families rarely sit together in these times of Internet, TV and cell phones,” remarks Abraham.

In a flooded home, Ramanan waited for four days on the first floor balcony, along with his wife, a 6-month old infant, and two relatives. He built it after working in UAE and saving money for over 30 years.  Living in the remote area of Thiruvala, he noticed rescuers at a distance. They were too far to hear him, and he didn’t know how to get to them, with the little baby in hand.

“Until 7 pm, the situation was still manageable. Then they opened the dams on the night of 16th August, and the water came in like the ocean. The government says that they will give us money, but we haven’t heard anything from them. The roads are all clean now and no one has come to help or enquire about us yet. I feel so happy that you called us to ask how we are,” Ramanan says.

”But who knows if they will give us anything? I wish those well who might receive some money from the government.”

Ramanan is 56 years old. He suffered losses of over 50 lakhs, and reckons that it will take at least 3 years to rebuild everything. To claim any support, he has been running around with his identity card and filling forms.”But who knows if they will give us anything? I wish those well who might receive some money from the government,” he says. As for the damage of basic amenities, the entire well, the family’s main source of drinking water, is filled with flood water. They have been buying bottled drinking water and relentlessly cleaning the house. He is trying to do everything possible to protect his family from possible diseases. Currently, there are almost 200 confirmed and suspected cases of rat fever after the floods.

Ramanan’s family was the kind of family that Abraham noticed while rafting back from the village. It’s hard to judge from a distance. Having survived the flood, Ramanan seemed more worried about rebuilding his home than feeling thankful for living. He is retired. Since he lost most things that he built from his savings, including two cars, he is counting on his children to help him live peacefully for his remaining years. His perspective shows that survival after a natural disaster isn’t always a sign of hope.

AT Rovers is now involved in assisting families in cleaning and providing relief supplies after the floods.

AT Rovers asked to say a special thanks to all who helped out during the rescue operations:

Most importantly, everyone who shared information and locations which helped them reach out to people on time.