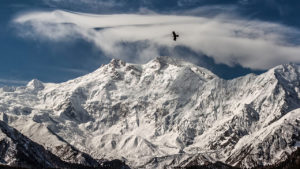 Rescue efforts on Nanga Parbat: Will History Repeat Itself in Search for Nardi and Ballard?

It’s been more than a week since Daniele Nardi and Tom Ballard were last in touch with the outside world, from 6,300 metres on Nanga Parbat, the ninth highest mountain in the world.

Since The Outdoor Journal published this story, news has since broken that confirmed the deaths of both Daniele Nardi and Tom Ballard.

Daniele Nardi from Italy and Tom Ballard from the UK have now been missing for over a week. Hopes are slowly fading in the search to find the two climbers alive. With stormy winter weather incoming, plus the escalation of the conflict between India and Pakistan, it does not look promising.

“I see very little chance for the two climbers to be found alive. Heavy snowfall has significantly increased the avalanche risk, especially on the exposed Mummery Rib,” says German mountaineering journalist and blogger, Stefan Nestler. “All signs point to the fact that Daniele Nardi and Tom Ballard were caught in an avalanche, and it’s rather unlikely that the pair survived given the current conditions on the mountain.”

The Mummery Rib, which sits on the Diamir Face of the mountain, is named after the British climber Albert F. Mummery, who had launched one of the very first attempts of Nanga Parbat in 1895. However, he and two of his climbing mates disappeared after they had reached the rib, and it is believed that the three became victims of an avalanche. To this very date, the rib has never been fully climbed.

Rescue efforts led by Pakistani mountaineer Muhammad Ali Sadpara, who together with Spaniard Alex Txikon and Italian Simone Moro succeeded in the first winter ascent of Nanga Parbat, are currently on hold due to the low visibility, bad weather and lack of access. This is exacerbated by the fact that the helicopters, which are exclusively administered and flown by the Pakistani army, are being deployed at the border with India due to the recent hostilities between the two nuclear powers.

According to Sadpara’s Facebook page, a helicopter is waiting for the weather to clear to collect four climbers from K2 base camp to assist Sadpara in his rescue efforts. The K2 team is led by Alex Txikon who plans to use drones to search the area around the Mummery rib and Kinshofer route.

The situation is similar to last year’s rescue of the French mountaineer Elizabeth Revol and her Polish climbing mate, Tomek Mackiewicz, who got into trouble on their descent from the summit. This heroic rescue effort that involved the entire climbing community showed a great deal of solidarity and led to the rescue of Revol. However, Mackiewicz remained on the mountain.

Whether or not Ballard and Nardi will be as fortunate as Revol remains to be seen. Nardi is a well-known character in the Nepal Himalaya with an Everest ascent and attempts on Makalu and Cho Oyu under his belt. In 2011, he took part in scientific research to measure humidity, temperature, wind direction and solar radiation on the highest peak on earth. Tom Ballard also started climbing and mountaineering at an early age, stepping into the footsteps of his mother who was considered one of the female high altitude pioneers in the 1990s. Sadly, Alison Hargreaves never returned from her successful climb of K2 in 1995, when she got literally blown off the second highest peak in the world.

“Mountaineers, who are climbing in the North of the country, have to be aware that rescue operations are very limited in Pakistan. They may hope for help from outside, however, they must never rely on it, especially not in winter,” says Nestler. “Professional mountaineers have to accept that in an emergency they will have to rescue themselves. Successful operations, such as the rescue of Elizabeth Revol last winter, will sadly remain an exception,” Nestler concludes.

Cover photo: Nanga Parbat (Naked Mountain) is the world’s 9th highest mountain and the 2nd highest in Pakistan (after K2). Shot from Fairy Meadows, the Raikot (Rakhiot) Face on the northern side is quite imposing. Photo by Ahmed Sajjad Zaidi