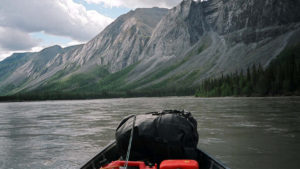 Secrets of the Nahanni: The Valley of Headless Men

A team of river guides and storytellers venture into the "Valley of Headless Men" to uncover secrets of the past.

In 1908, brothers Willie and Frank McLeod embarked on a mission into the Nahanni Valley in search of gold. They never returned.

Two years later, the bodies of the McLeod brothers were found on the banks of the Nahanni River. Their heads though, were nowhere to be found. The two men were murdered, decapitated, and left on the side of the river for the next party of explorers to find.

Nine years after the McLeod brothers were found, Martin Jorgenson set off into the Nahanni Valley on a quest for gold. Soon after Jorgenson sent out letters claiming he had struck gold, his cabin was mysteriously burned to the ground. The remains of his body were found among the ashes. Just like the McLeod brothers, Jorgenson’s body was found without a head. In 1945, a miner from Ontario succumbed to the same exact fate. His body was found headless in his sleeping bag.

We may never know the truth behind these “Headless Tales”, but what we do know is that this was only the beginning of many mysterious and haunting stories surrounding the Nahanni Valley.

The Nahanni River flows through Nahanni National Park Reserve in the Northwest Territories in northern Canada. The Nahanni Valley is only accessible by river, plane, or foot. With deep canyons, hot springs, epic whitewater, beautiful hiking and a massive waterfall, the Nahanni is one of the most impressive river trips in North America. It is often considered Canada’s (more remote) version of the Grand Canyon.

For how impressive the Nahanni River Valley is, and how compelling the stories surrounding it are, I am surprised by how little I have heard about this river!

Marc is a filmmaker from Calgary, Alberta. He first learned of the Nahanni over 15 years ago while writing a paper for his History of Exploration course at The University of Calgary. He came across an article about the McLeod brothers and Martin Jorgenson, which is originally what piqued his interest. For ten years, Marc used these stories as inspiration for other film scripts he was writing. He eventually decided he wanted to learn more about the “Headless Tales”, as well as the other stories that have sprung from the Valley. Marc was on a mission to learn from the Dene people, the First Nations people who inhabit the northern boreal and Arctic regions of Canada. Marc was able to find written word from European and Colonial Canadian explorers that mentioned centuries of oral history from the Dene people, but he was never able to find written history by the Dene people on the subject.

Marc’s curiosity about the mysteries surrounding the Nahanni Valley kept increasing, so he decided to take matters into his own hands. Marc’s documentary film, Secrets of the Nahanni, will follow the Nahanni River, while telling the stories and legends that sprung from the Valley. Marc’s goal is to “make a documentary exploring the Nahanni River Valleys to share the experience of its natural wonders to others, while at the same time connecting these areas to the legends and mysteries that add another layer of curiosity and character to the region.”

The Nahanni Valley is such a sacred place that there are many parts of it which are closed off to the general public. Marc went through a six month process to obtain permission and permits to not only film on the Nahanni River, but to access the restricted areas that the general public isn’t allowed to see. He also obtained permission to film and capture, the Dene Oral Histories, which has never been recorded.

The actual trip down the Nahanni to film will be taking place in summer 2019. Until then, Marc and his crew will be working hard to promote this project and gain the necessary support to make it happen.

For more info about the film, and the opportunity to support the expedition visit: http://secretsofnahanni.com/