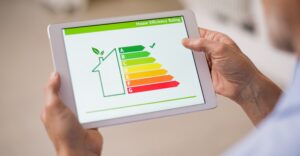 Press release from CFA:
Washington, D.C. – Six environmental and consumer groups are suing the U.S. Department of Energy (DOE) for failing to review and update energy efficiency standards for more than two dozen categories of consumer and commercial appliances and equipment, including large energy users like refrigerators and water heaters. The 25 overdue standards—the most under any administration—could cost U.S. consumers and businesses billions of dollars and significantly increase climate pollution.

The standards apply to a wide range of common household appliances—such as microwaves, dishwashers, furnaces, washers and dryers—as well as commercial equipment like large air conditioners and refrigeration equipment.

The lawsuit was filed by NRDC (Natural Resources Defense Council) and Public Citizen (represented by NRDC attorneys); and Sierra Club, the Center for Biological Diversity,  Consumer Federation of America, and the Massachusetts Union of Public Housing Tenants (MUPHT) (with Earthjustice as their counsel) in the U.S. District Court for the Southern District of New York on Oct. 30. Fourteen states, New York City, and the District of Columbia filed a similar lawsuit in the same court today.

“It’s always been extremely important that these cases go forward no matter the outcome of the presidential election,” said NRDC attorney Jared Knicley. “The Trump administration’s abject failures on energy efficiency policy do not disappear when President-elect Biden is sworn in. The consumer, economic, and environmental benefits of updated standards will not be realized until the Biden Department of Energy completes those updates. Our lawsuit still intends to make sure that happens as soon as possible.”

Updating the standards as required by law would save America’s households and businesses at least $22 billion annually on their utility bills and prevent more than 80 million metric tons of carbon pollution every year— equal to the annual tailpipe emissions from more than 17 million cars—by 2035. However, the actual numbers are likely far higher as the totals represent only the 15 standards where recent projections are available.

“DOE’s foot-dragging results in greater—and avoidable—energy use, causing increased air pollution that harms public health and the environment, and higher energy bills for consumers and other users of the overdue products. Plaintiffs bring this suit to put an end to DOE’s unlawful abdication of its duties,” according to the environmental groups’ lawsuit.

All of the parties formally notified DOE Secretary Dan Brouillette in August that they would sue if the agency did not come into compliance with its duties to review and update efficiency standards under the Energy Policy Conservation Act (EPCA) of 1975, which established the national appliance and equipment standards program. DOE ignored the warning.

Since its launch, the national efficiency standards program has quietly saved Americans billions of dollars on their utility bills—$500 per household, on average, every year—and is projected to save, in total, $2 trillion and help the U.S. avoid 7 billion tons of carbon pollution by 2030. The DOE under President Trump has failed to review more standards than any other presidential administration, denying Americans the billions in energy bill savings and adding millions of tons of pollution to the air. Low-income communities and people of color, which often pay a larger percentage of their income for energy and frequently live closer to polluting power plants, are especially harmed by the lack of efficiency standard improvements.

Without the required updates to standards as technology advances, less efficient products remain on the market and consumers may inadvertently choose appliances and equipment that waste energy, cost more to operate, and increase climate pollution.

“The Trump Department of Energy has been ignoring the law and trying to undercut what has been a hugely successful national energy efficiency standards program at the expense of U.S. households and businesses,” said Noah Horowitz, director of NRDC’s Center for Energy Efficiency Standards. “This is needlessly costing Americans billions of dollars, including low-income households already suffering a high energy burden, while significantly increasing the carbon and other pollution dirtying our air. We won’t let this stand.”

“It’s astonishing that the Trump administration is failing to carry out this common-sense law that saves people money and reduces air pollution,” said Howard Crystal, legal director at the Center for Biological Diversity’s Energy Justice Program. “The climate crisis demands we do everything possible to reduce carbon emissions to ensure a livable planet, and we can’t afford to let the Department of Energy abdicate its responsibility.”

“Appliance efficiency standards have consistently proven they provide sizable direct benefits to consumers in the form of lower utility bills, as well as significant macroeconomic benefits for the entire country. It is unconscionable that the Trump administration has abdicated its responsibility and repeatedly missed legal deadlines to take up efficiency standards for consumer products. Now more than ever consumers can use additional pocketbook savings that efficiency standards can deliver. We have been forced to seek remedy in the court to have the Department of Energy meet its obligation, but are hopeful that the future Biden administration will take prompt action to address these missed deadlines so that consumers can have access to more energy-efficient products,” said Mel Hall-Crawford, Energy Programs Director for the Consumer Federation of America.

“Energy efficiency standards are a simple, straightforward, and cost-effective way to reduce our emissions. That the Trump administration continues to shirk its responsibilities is a disservice to the American people and the work ahead of us to stem the impacts of a climate crisis that is already here and ravaging our country,” said Tim Ballo, Earthjustice staff attorney.

“This year’s fires in California are a stark reminder that the planet is warming, dangerously and quickly, often making many people homeless. We must do everything we can to slow the rate of climate change, which will particularly harm low-income households everywhere. Promptly adopting strong appliance efficiency standards is a critical tool to do so, and will also lower consumers’ energy bills” said Jack Cooper, Executive Director of the Massachusetts Union of Public Housing Tenants.

“The Trump administration’s toxic brew of climate denialism, hostility to commonsense regulation, disdain for the law and utter incompetence is costing consumers, speeding us to climate catastrophe, impeding innovation – and doing long-term damage to the jobs, employers and economy it claims to venerate,” said Robert Weissman, president, Public Citizen.

“This is but another example of the Trump administration running roughshod over the law in the hopes of pandering to polluters, instead of looking out for the health and welfare of working families,” said Al Armendariz, Senior Federal Campaigns Director of Sierra Club’s Beyond Coal Campaign. “Energy efficiency is essential to reducing dangerous fossil fuel pollution, scaling up our zero-carbon economy, and fighting the climate crisis. Despite the law being clear, the Trump administration is doing everything it can to stall and block cost-saving energy efficiency policies like these, which is both outrageous and dangerous. We will not stand for it, and neither will the courts or the American people.”

Meanwhile, DOE also has rolled back two light bulb standards that would have saved consumers $14 billion on their utility bills and avoided 38 million tons of climate-warming carbon dioxide emissions every year, actions now being challenged in the courts. DOE finalized changes to its efficiency standards process that will slow down—and create hurdles to—future efforts to make America’s appliances and equipment more efficient. (Several groups ) NRDC, Sierra Club, CFA, and others also successfully sued to finally force the DOE to publish four long-delayed standards in the Federal Register—the final necessary step—almost three years later than they should have been finalized.

EPCA allows private groups to sue the DOE when it misses deadlines to review and update standards. When the agency under President George W. Bush missed 22 deadlines for standards, NRDC and MUPHT sued in 2004, leading to a landmark consent decree that set new, binding deadlines for each standard. Under President Trump, DOE has consistently missed deadlines.