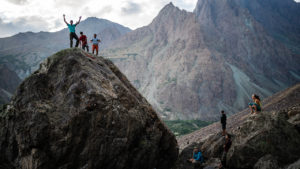 Two weeks of sending in the remote Suru Valley: From 300 boulder problems to alpine rock climbing in the uncharted Himalayan giants.

I don’t usually attend festivals, but the Suru Fest had been on my list for as long as I had heard of it. So in late August this year, I spent a week and a half in the Ladakh region of Jammu and Kashmir, climbing and bouldering with some of India’s best climbers, as well as a host of international adventurers. This year’s event was the third, and possibly most successful instalment since its inception in 2016.

The festival is the brainchild of Suhail Kakpori and Jamyang “Jammy” Tenzing, ‘Indian Climbing’s Exploring Boulderer’ previously covered by The Outdoor Journal. Jammy organized the first Suru Fest with a small crew of dedicated and passionate Ladakh-based rock climbers, which has now grown into a sustainable, sponsored event attracting climbers from all over the world.

While the idea is to unite the climbers from all across the globe, it is a festival premised on celebrating the power of youth and adventure. It’s held annually from late August until the first week of September and is a force that brings both athletes and creatives together to create inspiring content.

This year’s festival was sponsored by Tata Motors, an Indian multinational conglomerate with hundreds of well-known brands and properties, including Jaguar Land Rover. Eight 2018 Tata Hexa SUVs were made available to move climbers around from place to place, in this remote and wild part of the world. One of the Hexas also waited for us in Leh, but we were waiting for our dog Maurice – we’d flown in, but Maurice was being driven up to Leh from Delhi (about 48 hours by road). We had to wait for him and delay our early morning departure, and eventually get one of the many shared cabs that ply these mountain roads – pretty much the de facto method of getting around in Ladakh.

It was late in the day by the time Maurice arrived in Leh, and Tenzing got us a shared cab for Suru, near Kargil, several hours west of Leh. We then drove through one of the most picturesque landscapes in India. The road is very well paved for the most part of the journey, which isn’t usually the case in and around the Himalayas. The thought of being at the Suru Fest hadn’t quite settled in yet – perhaps I simply didn’t know what to expect. This was my first climbing festival and all I knew was that I was going to spend a week climbing and exploring the valley.

Unlike Leh and its location on the trans-Himalayan plateau, which comprises of high altitude arid desert, Suru is green, with agricultural activity. We reached Barsoo, a small village in Suru close to midnight. Upon entering the campsite, I was shown my way to a 3-man GIPFEL tent – a new, Indian outdoor gear make and the 2018 Suru Fest’s climbing equipment partner. In the morning I woke up to a sweeping view of the scenic valley that surrounded our campground. We had a pre-bouldering yoga session scheduled first thing in the morning, before breakfast… Talk about a flying start to the adventure! Following the session, we had breakfast and went exploring the climbing areas. “Most of the rocks here have been climbed, graded and documented. The topography to this area is also well underway” Jamyang told us. There are about 6 dedicated climbing areas in Suru and 300 problems with grades varying from 5C to 8A+.  The Suru tribe has and is fully invested in expanding the scope of climbing in Ladakh and also across India. 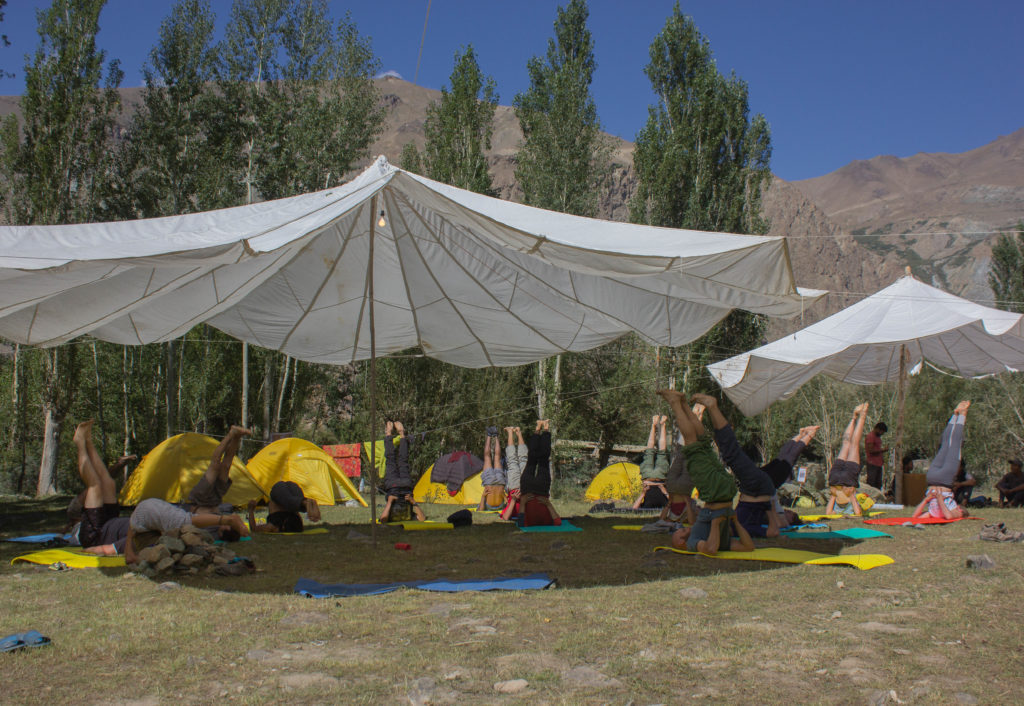 Amongst the few known Indian athletes and some elite climbers, Suru also hosted three IFMGA guides, two of which were from Georgia and one from the United States. The Georgians rigged their first sports route on a highball near the shore of the boulder-choked Suru river; their first in the himalayas. Sunny Jamshedji was another important addition to the festival whose tryst with trad-climbing has taken him across 20 US states over 22 years. I had heard of him through Prerna, who went climbing with him in Dhauj. The festival certainly couldn’t have asked for more experienced company.

Meanwhile, I lucked out when Luke Smithwick, an IFMGA guide and a prolific American climber with over 50 unclimbed Himalayan six-thousanders to his name, lead me up on my first multi-pitch trad climb. We did three pitches and an FA of a 5.6 route we named, “The Windy Novice”. As an inexperienced climber who is just getting started, I couldn’t have been more stoked. There are inherent risks involved in trad; you often expect your partner to have some kind of real rock experience before taking him out on a big Himalayan slab climb. Nonetheless, this was something I had been looking forward to for some time and I am glad to have made the experience with Luke, who mentored and lead me up the wall.

“Alpine rock climbing (no snow/ice) in the Himalayas is like climbing alpine rock anywhere in the world with just one caveat. Everything is much bigger than you think! The approaches are longer. The areas are mostly virgins, so there is very little to no information on the approach, route or descent. One has to figure things out themselves on the go. Places like Suru and Miyar have thousands of feet of alpine granite to explore, so if you are willing to do this sort of climbing, then this is an alpine paradise…”,  said Sunny when I asked about his thoughts on climbing in Suru.

Suru Fest is the first of its kind in India. While it constitutes of a demographic representing only a fraction of the population, it is a catalyst in that it suggests a much-needed deviation from the norm. We have long awaited the arrival of a culture that collectively underlines individualism and vigorously captures the spirit of the times. Suru does just that and does it with grace.

“I was particularly happy to send two projects which I was not able to execute last time even though I tried really hard. This is a great measure of progress which one doesn’t get in the gym because the routes there are reset frequently. I was also content to push my personal limits on a 7m highball. Besides the superb quality of the rock and the lines as well as the great weather I love that Suru Fest brings together an amazing crowd of people who share the passion for the outdoors and climbing. Honestly, I first and foremost came to see my friends in India.”, said Svenja Von Jan, a climber and a friend from Germany who also attended the festival last year in 2016.

Svenja and I had met a few years ago in Himachal Pradesh in this quiet little village called, Kalga. Back then, I was exploring Parvati Valley in the Kullu district and had become obsessed with this particular mountain, which I hope to climb some day. It was also in Kalga, where I had my first hands-on experience while climbing a highball. We had found this high mossy boulder and were able to put up a few lines. She was strong back then and has undeniably grown stronger since then. So watching her try some hard moves in Suru was inspiring to say the least.

When you’re surrounded with experienced climbers you will only improve. The novelty of Suru is that it exposed me to some fine climbing along with some fine climbers. I was particularly drawn to this rock with some interesting looking features, referred to as the Green Mamba, a 7C+ problem. It took Adarsh Singh, a professional athlete, two to three attempts before topping out. I also saw Viraj Sose, who’d climbed Ecstasy Tree, a sick bulging 7C highball in Hampi: a boulder high enough to send chills down your spine.

Looking back on that slab, I still remember the ease with which Luke loosened me up for the climb. “You know what this is?”, he asked me, while holding out a nut tool. “Mhm, I have used it once or twice”, I said with every ounce of confidence I could gather. On our first pitch, while sitting on a ledge, I heard him say “Off Belay”. “Belay off,” I said and started paying out the rope. I had well familiarized myself with the jargon before we started off. On the second pitch, we stood leaning back on the rope with the weight of our bodies distributed equally over a three point anchor system. It took me a while to register that. “This can hold the weight of a big truck”, said Luke reassuringly. Now, closer than ever to the last pitch, the wind had picked up a bit and I felt a wave of euphoria sweeping over me. I then turned to look in the other direction and immediately spotted the Georgians glued to a big vertical wall, it was cinematic! Shortly after topping out, I calmed myself down and caught hold of my breath. “So much to celebrate discomfort,” I sighed.

Now, as I write this from the flat, smoggy and hot environs of Delhi, having returned sooner than I had wanted, I’m looking forward to returning to the high mountains, attending the festival next year and further honing my skills.