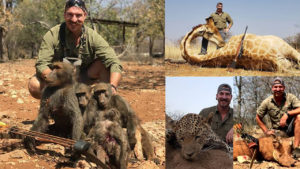 Idaho Fish and Game Commissioner Blake Fischer has lost his job over an email. In it, he messaged over 100 people the details of his recent hunting trip to Namibia, in which he and his wife shot at least 14 animals. The email included photos of Fischer smiling while posing with dead animal carcasses including a giraffe, leopard, impala, sable antelope, waterbuck, kudu, warthog, gemsbok (oryx) and eland. But perhaps the most disturbing photo was of Fischer’s smirk as he held up the lifeless bodies of a bloodied family of baboons, including a baby that he says he shot with a crossbow.

Idaho Fish & Game Commissioner Blake Fischer went to Namibia, murdered at least 14 animals, including an entire family of baboons, a giraffe & a leopard, then boasted about it online with pics (graphic). Several former Commissioners demand his resignation https://t.co/ePrnhBrbNw pic.twitter.com/Iw4LoPB1X4

Over the past few years, trophy hunters like the dentist who killed Cecil the Lion in Zimbabwe’s Hwange National Park have received media backlash. But what sets this instance apart is that the demands for Fischer to resign are coming from within the hunting community, from former Idaho Game Commissioners, not vegan soccer moms.

Fred Trevey, commissioner from 2007 to 2015, told Fischer in an email: “I’m sure what you did was legal, however legal does not make it right.” Another former commissioner Keith Stonebraker added: “They killed a whole family, including small baboons, and I think that’s revolting. It just puts a bad light on us.” The final blow came when Idaho Governor C.L. ‘Butch’ Otter asked for Fischer’s resignation on Monday, according to a news release.

His rationale is a murderous facade.

The Commission’s core goal is to preserve, protect, perpetuate, and manage wildlife in Idaho, which it deems to be property of the state. Citing this, Fischer at first attempted to defend his actions amidst the media firestorm. “I didn’t do anything illegal. I didn’t do anything unethical. I didn’t do anything immoral. Idaho’s Fish and Game statute says we’re supposed to manage all animals for Idaho, and any surplus of animals we have we manage through hunting, fishing and trapping. Africa does the same thing.”

Hunting organizations commonly advocate for hunting as a necessary method of population control that carries environmental benefits. Hunting, they argue, keeps balance in the ecosystem, and if populations go unchecked, animal disease and starvation will result. In Africa, culling has been used as a species management tool for elephants, lions, kangaroos, and deer, among others. However, many iconic African species targeted by trophy hunters are in steep decline.

Fischer’s logic doesn’t add up. His rationale is a murderous facade. Claiming that you hunt in order to cull species that are deemed overpopulated and then pose over the animal carcass with a shit-eating grin is a twisted way of acting out one’s care for the environment. The local people may need to hunt for survival. But trophy hunting is rooted in cruel perversion.

A petition was set up on the petition website change.org, and announced victory having acquired over 6000 signatures demanding Blake Fischer loses his job.

In just a few hours hundreds have signed this #animalrights petition calling for Blake Fischer, an Idaho wildlife official who went on a #trophyhunt and killed a family of baboons, a leopard, a warthog and more, to be fired. #animals #trophyhunting https://t.co/e8RXsyAS71

Fischer declined to comment when contacted by TOJ, but since resigning, he has publicly admitted his culpability, as reported in the Washington Post. “I recently made some poor judgments that resulted in sharing photos of a hunt in which I did not display an appropriate level of sportsmanship and respect for the animals I harvested,” Fischer wrote. “While these actions were out of character for me, I fully accept responsibility and feel it is best for the citizens of Idaho and sportsmen and women that I resign my post.”

Read next: Human Lives Are Not More Important Than Animal Lives

Captain Paul Watson, environmental activist and founder of Sea Shepherd Conservation Society explains interdependence of species and why a biocentric approach is what the world needs.