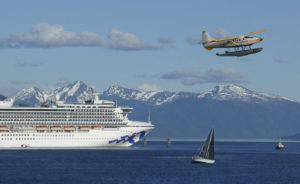 The Coronavirus and Tourism

Places like Alaska without a COVID-19 outbreak could still be devastated. General fears, tourism and travel are expected to plunge in the coming weeks and months.

Alaska doesn’t have a single reported case of COVID-19, yet economically it may be at its mercy.

That’s because seasonal tourism plays an outsized role in Alaska’s economy, representing as much as 1 in 10 jobs throughout the state and more in the regions surrounding Anchorage and the capital Juneau. Nearly all of the state’s tourists get there on a cruise ship.

As a result of government warnings and general fears, tourism and travel are expected to plunge in the coming weeks and months, particularly on cruise ships, which have begun temporarily suspending operations. And that’ll be true regardless of whether COVID-19 eventually spreads to Alaska.

As economists who specialize in how people respond to risks like infectious disease and the regional impacts of economic shocks, we believe Alaska offers a window into just how far-reaching the impacts of the current outbreak can be even if the pandemic’s spread is well managed. It also could help guide the federal government as it considers an economic stimulus package designed to offset COVID-19.

There are many reasons to expect people won’t be doing much traveling for a while if history is any guide. During the swine flu outbreak in 2009, a substantial number of travelers canceled trips they had already paid for, forfeiting the cost to avoid the risk of infection.

At the moment, the government’s focus is on slowing the spread of the disease. U.S. public health officials are urging people to avoid large gatherings and quarantine themselves if they think they may have been exposed to COVID-19 or are in at risk demographics. Travel is viewed as being particularly risky during the outbreak. The Centers for Disease Control and Prevention recently warned against long plane trips or cruises as one way to minimize individual risks of being infected.

As a result, Americans are already canceling or rescheduling trips in response to concerns about COVID-19.

Yet, travelers planning a trip to Alaska this summer can easily reschedule for another year, since many airlines are waiving flight change fees. And these airlines and other large companies that suffer losses as a result of the outbreak stand a good chance of receiving a bailout that makes them whole.

But regional economies dependent on seasonal tourism – such as southeast Alaska, where Juneau is located – can’t simply wait for another season or federal aid to recoup their losses. For communities and small businesses heavily reliant on the busy summer months for a significant amount of jobs and business revenue, the damages from an outbreak like COVID-19 could be catastrophic. Employment in the leisure and hospitality industry in southeast Alaska represents 15.7% of all total non-farm jobs during the busy summer months when employment is more than double what it is during winter.

Only last year, a regional development organization projected that a record 1.44 million visitors would spend nearly US$800 million while on holiday in the region this summer. And 90% of them were expected to come on cruise ships.

With the pandemic showing no end in sight, the number of visitors coming to Alaska is likely to be much smaller.

Additionally, many parts of Alaska that are tourism-dependent also rely upon seasonal fisheries. These fisheries have international supply chains and workforces which will likely be interrupted by the COVID-19 outbreak. Many of their products are marketed overseas, where demand has been hurt by the pandemic.

For example, Alaska’s five salmon species are all harvested by commercial, recreational and subsistence fishermen during brief “runs” during the summer. An outbreak that disrupts supply chains during these runs, or causes tourist fishermen to say home, would be another huge blow to these communities. In other words, the Alaskan economy illustrates some of the economic costs of what will happen as people minimize their exposure to COVID-19 by “social distancing” and self-isolation.

Lawmakers and the Trump administration are currently discussing a possible economic stimulus package or bailouts for those most affected by the coronavirus outbreak. But the economic impact will vary wildly from state to state, community to community, industry to industry. Some states will be hurt by a dearth in tourists. Others will be hammered by a sharp drop in consumer spending at local businesses.

Bailing out whole industries, such as the cruise industry, will do little to help the communities like those in Alaska dependent on it. For this reason, any potential bailout should take into consideration which businesses and people are bearing the biggest costs, and target communities most exposed to the risk.