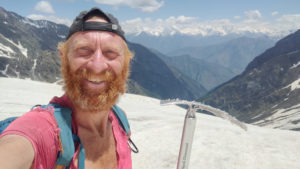 Trans Himalaya 2019: Breathless in the Himalaya

In an unprecedented Himalayan snowfall, ultra-runner Peter Van Geit breaks out his ice axe to access undocumented passes in the High Himalayas.

After completing the entire length of Uttarakhand in 17 passes, I entered the neighbouring state of Himachal Pradesh. I had been doing 600-700 km ultra runs through this beautiful state in previous years on lesser-traveled roads in remote valleys. This time I was targetting several passes across the high mountains in three major sections: the Great Himalayan National Park (GHNP) a wildlife sanctuary and protected biosphere, the Dhauladhar range separating the Kangra plains and Chamba valley, and the Pir Panjal range separating Chamba from Lahaul. As of mid-July, I completed 45 high altitude passes touching 4,600 meters and heavy snow due to unprecedented snowfall this winter.

Climbing above 4,000 meters in early summer meant cutting through steep, frozen snow gullies with my ice axe, opening several passes not yet traversed by anyone or following the fresh trail of the shepherds who had just migrated across some passes. With the Northeast monsoon setting in soon, I’ll be moving next to the high altitude deserts of Lahaul and Zanskar to complete several 5,000-meter plus passes and come back down to Garhwal in Uttarakhand in September once the rains in the lower Himalayas subside.

Read next on TOJ: Alpine-Style, Ultra-Challenge in the Himalayan High Passes

GHNP is cornered between the high ranges of the Parvati National Park and Kinnaur. Three major rivers flow through this national reserve: the Tirthan, Sainj and Jiwa Nala separated by sharp, steep rising ridges. With no accurate trail info available on the Internet (no blog references meant few people or none have hiked here) I explored all three valleys using a very rough PDF sketch map made available by the tourism office and crossed over through three steep passes. The park has some of the steepest and most inaccessible rock cliffs I have encountered. Losing the trail here meant getting stuck inside near-vertical cliffs.

Once the snow melts on the higher ranges, many young men in Uttarakhand and Himachal go out in search for the “Jungli Nalla”, a high altitude medicinal root which is smuggled across the border from Tibet into China. One kilogram fetches 20 thousand rupees ($300 USD). Spending one and a half months in the mountains provides sufficient income for the rest of the year. While hiking deep inside the GHNP, I came across several villagers digging for both roots as well as large, beautiful rock quartz crystals.

Dhauladhar is a 4,000-meter plus mountain range which rises up steeply from the Kangra plains between Dharamsala and Palampur. Several passes cross over to the beautiful Chamba valley fed by the Ravi river which flows down from the high ranges separating Kullu-Chamba-Lahaul districts. There are several high altitude glacial lakes in the Dhauladhar which are considered holy and visited during an annual late summer pilgrimage by the local people. Most of the lakes were still covered under a thick sheet of frozen snow when I passed by.

I crossed five passes in the Dhauladhar: Baleni, Minkiani, Indrahar, Waru and Gaj pass between 3,800 to 4,300 meters coming across heavy snow at the North facing (less exposure to the sun) Chamba side. The most adventurous was Waru at 3,870 meters, a lesser-known pass used only by shepherds (which means undocumented) where I lost the trail several times. Trying to get back on track, I had to scramble through dense forest and climb down through several side gullies which had cut deeply into the valley slope resulting in several “free solo” moments while climbing down 100-meter plus vertical drops. I survived several breathless and adrenaline rushing moments here until I set a foothold on firm ground again.

The Pir Panjal is a high range of 5,000meter peaks separating the Chenab river valley (geopolitically split across Pangi and Lahaul districts) and Chamba valley. Shepherds from Chamba annually migrate with large herds of 300 to 1,000 sheep and goats across several very steep 4,500 meter passes to graze the high altitude meadows of Pangi and Lahaul which produces better quality milk and meat. They return home only five months later at the end of the summer before the passes close again.

I crossed the Marhu, Darati and Chaurasi passes touching 4,200 to 4,600 meters, all undocumented, following the footsteps of the Gaddis or shepherds who had just crossed over. The most adventurous and scary one is Darati, which is a sheer vertical 1,000-meter rockface that seems impossible to climb at first sight. From steep snow-covered ridges on top of the pass to a labyrinth of narrow passages through steep rock faces, one can only imagine how shepherds traverse these with 500 sheep. About 5% of the sheep do not make it alive to the other side.

I experienced one of the most spellbinding moments in my entire journey so far while I was about to climb up the Chaurasi pass. At exactly the same moment, a massive herd of more than a thousand sheep and goats descended down the snow-covered pass displaying their natural skill to traverse these very steep slopes. They were guided by ten shepherds from Barmour district in Chamba on their way to the fairytale Chaurasi ki dal glacial lake surrounded by lush green meadows dotted with alpine flowers of all colors of the rainbow.

The most memorable moments in these remote valleys of the Himalayas have been my encounters and night stays with the Gujjars, or mountain tribes. Small, remote hamlets far beyond the last villages deep inside the forest, completely disconnected from civilization. These tribals live with their cattle in large beautiful rock and mud shelters built with huge pine tree trunks. They graze their buffaloes, horses, and sheep in the meadows which stay together with them under the same roof. Each and every encounter along my way with these native people has been one of heartwarming hospitality. After a full energy-draining pass crossing, ending up around a warm fire in a mud home eating freshly cooked food with these families who consider you as one of their own is beyond words.

Peter will continue to share his field notes with the hope of inspiring others to explore these beautiful locations. You can read more about Peter’s experiences and motivations in his interview here – Alpine-Style, Ultra-Challenge in the Himalayan High Passes. Stay tuned on The Outdoor Journal for Peter’s next update along his 2,500 km journey.