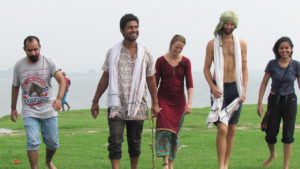 A Vasudhaiva Ride Update: The Intangible Rewards of Volunteering.

Local and global volunteers have helped Ben and Prashant a great deal on their project-driven motorcycle journey from India to Scotland, proving that the collective human spirit is inherently good in nature.

In July, the Outdoor Journal introduced Vasudhaiva Ride. Below, you will find an update, but if you missed the first article, then you can find it here.

The moment Felix arrived at the Bihar Project of the Vasudhaiva Ride, he heard a familiar Colombian greeting: “Bienvenidos parcero!” Felix was far from Colombia, but felt at home. He was in India, to join Prashant and Ben’s team as they built a model for resilient housing in Arrah, Bihar, one of India’s poorest regions.

“I think the Vasudhaiva Ride opened a new world for me; instead of living as a tourist, I was suddenly living and working side by side with a local community.”

Once he had arrived at the project, Felix met other volunteers who shared a common vision: to create a skills learning centre to offer a new future to the local people of Arrah: a building that grows its own food, sources renewable energy, cleans its own waste water and is made of hybrid materials.

Not backed by a company or government, Prashant and Ben built projects in Rajasthan and Bihar that have an incredible story of volunteers behind them. Ben and Prashant, co-founders of the Vasudhaiva Ride, had both volunteered in their own communities back home, and knew that there was potential to harness the power of collective will in these projects. However, they didn’t know just how central the role of volunteers would be.

Every project of the ride demands a different approach and form of engagement. In Pushkar, Ben rode from one hostel to another to reach out to travelers who would be willing to help out. The cafe-perched tourists were quick to join once they heard, “we’re building a house out of mud and waste!” When Ben found Pineapple Express, a hostel for global travelers, he was greeted by Romy from the Netherlands. A chai and some music later, Romy decided to leave her position at the hostel and join the Pushkar Project as an artist. She created a macramé hanging garden, which soon evolved into managing volunteers and learning how to make a traditional grass-weave roof.

“I think the Vasudhaiva Ride opened a new world for me; instead of living as a tourist, I was suddenly living and working side by side with a local community. I never knew I would be so interested in other cultures,” recalls Romy, while describing her experience with the project in Pushkar.

Some forty local and international volunteers ended up working with the Pushkar Project. It gave immense hope to Ben and Prashant for the projects to follow.

“By the end of their time, they would return to the project site with a smile because they were able to see the richness of these communities beyond material wealth.”

However, once they reached Bihar, the two realised that it would be a different story: working in one of India’s most dangerous, deeply conservative and least travelled states, far from the world of tourists. The project initially relied only on a team of two, along with a few local labourers. They built up a small team of volunteers. Romy flew back to India, and one year later, she set them up on Workaway.info. Then the family in Bihar began to grow.

In reference to the Bihar Project volunteers, Ben said of their most internationally diverse group to date, “We had people coming straight from their homes in Czech Republic, Brazil, Mexico and the UK. We saw liberal young adults who came from very open cultural contexts and had to deal with the conservatism in Bihar. When they came, they were shocked at the conditions of Ravi’s family in our neighboring slum community. By the end of their time, they would return to the project site with a smile because they were able to see the richness of these communities beyond material wealth.”

The projects of the Vasudhaiva Ride comprised of a team of skilled labourers and passionate volunteers. “More than 70% of the work was done by skilled locals, who really contributed to the quality of upcycling and training of volunteers. When the projects finished, we all shared in the rewards of that,” recollects Prashant.

The stories of the volunteers of the Vasudhaiva Ride in Pushkar and Arrah offer much insight, one of which is in the rewards of giving. In a world that never fails to share incidents of selfishness and greed, perhaps we have forgotten about this important quality within human beings. In such a context, the Vasudhaiva Ride is able to show that it is of immense importance. The Vasudhaiva Ride serves as a reminder that human beings are capable of and desire to do so much more than we ever believe to be the case, and that more projects and people need to embrace this quality of a more fulfilling and happier life.

Have a read through some of the reflections of volunteers who worked with the Vasudhaiva Ride project. You’ll see what we mean:

I am a recent graduate of UWC Mahindra College in Pune (’18). I feel part of that family that Vasudhaiva Ride creates and I see the world becoming smaller through small but powerful acts of just trust and love. I love how Ben and Prashant know when and how to stop, look around and understand that their cause is way bigger than what somebody can see.

I am currently an undergraduate student of Environment Development and Urban Geographic Studies at McGill University in Montreal. At the time, I was on a gap year and travelled to Pushkar solely to help with the project.

Both Ben and Prashant are wonderful, inspiring and immensely spirited human beings. I think one of the most significant things I carry forward from my time working with VR was that the daily innovations of our day to day can be significant. Being on the site and working in that environment – an entire local and global support team, with their individual passions and cynicisms, driving forward this project – created a feeling that everything was within reach. Despite its global span, for me, what Vasudhaiva Ride stands for is an appreciation of the local.

The world is one family is not just a saying but a feeling you feel when you’re volunteering with VR. When humans connect and collaborate for community living, then sustainable living is possible.

When I got to know that this project involved mud and cement and was going to produce its own food on terrace gardens and clean its own water through a similar traditional method of sedimentation I became inquisitive to land at Patna Airport and reach Godhana Road in Ara, Bihar where Ben came to receive me. This Scottish-Canadian gentleman looked no different than any Bihari with the red ‘gamcha’ on his head.

On the project site, I would be picking bricks one day and fixing the tiles for the mosaic flooring on another. From cutting bamboos to painting tires to planting trees and making planters from the plastic bottles and tins to working on upcycled terrace garden, I did what I possibly could.

‘Believe’ you can make a difference and you will. I learned this very important lesson of life from each and every volunteer I came across on this project.

It was fascinating hearing the story of the Vasudhaiva Ride and what Prashant and Ben were setting out to do. I was captivated and inspired and I knew I must help them in any way possible! We helped them with Social Media, PR, media relations, putting together events, promoting the events and just generally spreading the word.

I have enjoyed being a part of the Vasudhaiva family; the kinship, the contributing in a tiny way to such an amazing initiative, following their journey and learning more about how ‘out of the box’ living can be. It’s an awesome journey for all of us sitting at home in India, knowing our friends, our family are making such a difference in remote corners along their ride.

My strongest motivation to work with the Vasudhaiva Ride was the commitment made by Ben and Prashant. I wanted to be a part of that commitment and support them getting through it.

I was involved with their third project in Arrah, Bihar. I worked with landscaping, community work and documentation. Through landscaping, I learnt about upcycling and gardening. We made bamboo fences when I was there. Another big learning was how to use sustainable means as building material.

In this whole process I learnt how to interact with various people while working with them. My time there challenged me physically a lot. Being part of this project showed me that every small effort is worth supporting because it could lead to a stronger and deeper impact.