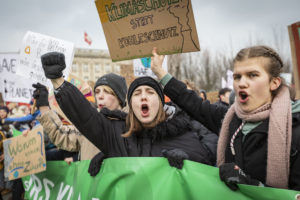 There is perhaps no better example of the complexity of our relationship with science than in the present discourse on climate change. It is, after all, science that gave us the knowledge to extract oil, coal, and natural gas from the earth and harness from their potent molecules the energy to power our cars, homes, and civilizations. The “fossil fuels”, that pantheon of concentrated carbons, have provisioned us with luxuries unimaginable a century ago. They’ve lifted millions of people out of poverty, fed countless hungry children, and erected the infrastructure that bulwarks the modern world. We burn them to transport ourselves across oceans and to the grocery store. By all accounts, the application of science to fossil fuels has resulted in unprecedented progress.

Of course, as most modern scientists, businesspeople, politicians, and kindergarten students can avow, the carbon narrative is not so simple. In fact, “carbon”, an unassuming element with six protons in its nucleus, has become a four-letter-word invoking extractive industry, toxic pollution, and gluttonous capitalism. In an expanding body of scientific research, observers have documented the rising sea levels, erratic weather events, and general planetary imbalance resulting from our injection of greenhouse gases into the atmosphere.

One striation of scientific ingenuity graced us with a potent source of energy; another damns its overuse. Those committed to a system sustained by fossil fuels champion the best science of yesterday. If the best possible science of today advises opposition to the status quo, our response as individuals and societies reveals our relationship with science. If we don’t heed the sirens of climate change, we are “deniers of science”. It’s difficult to get behind science that prescribes a radical overhaul in lifestyle when fossil fuel science has been doling out apparently limitless comforts. We should also remember that last century, science offered up oil and natural gas as cleaner alternatives to “dirty” coal. But with 97% of climate experts in agreement that fossil-fuel use is causing global climate change, the scientific pendulum has swung again, and we must respond in turn. Perhaps our acquired comforts have made us complacent; as of 2019, we have failed to slash emissions to the targets espoused by our most qualified scientists.

Winston Churchill, in a 1936 essay entitled “Fifty Years Hence”, addressed our vacillatory relationship with science. His warning, made in the context of burgeoning communism in the Soviet Union, resounds with global aptitude in the contemporary context of climate change:

“There are too many people maintained, not merely in comfort but in existence, by processes unknown a century ago, for us to afford even a temporary check, still less a general setback, without experiencing calamity in its most frightful form.” -Winston Churchill

As he concludes his essay, Churchill calls for precaution and moral sensibility in our pursuit of science:

“After all, this material progress, in itself so splendid, does not meet any of the real needs of the human race…forces terrific and devastating will be in their [our immediate descendants] hands; comforts, activities, amenities, pleasures will crowd upon them, but their hearts will ache, their lives will be barren, if they have not a vision above material things.”

It is necessary to expand the scope of Churchill’s prophecy to account for the ubiquity of the modern problem: “…their planet will be barren, if they have not a vision above material things.” Fossil fuels saddled us with the comforts, activities, amenities, and pleasures of the late 20th and early 21st century: air conditioning, cars, coffee, and capital. But now it is the voices of youth raised above the cacophony of a billion combustion engines who demand the change prescribed by climate science.

They aren’t “too cool for school”—rather, as the students propound, it’s getting too warm for school.

They are led by 16-year-old Greta Thunberg from Stockholm, Sweden, who sat with a sign on her local parliament steps for the first three weeks of school demanding of her politicians a radical stance against anthropogenic climate change. Since August of 2018, she has attended classes four times a week and went on strike every Friday, initiating the now-global “Fridays for Future” movement. Hundreds of thousands of schoolchildren from the EU and Australia traded algebra for advocacy and joined Thunberg at the end of the school week in a demonstration. One such event galvanized over 35,000 people. They aren’t “too cool for school”—rather, as the protestors propound, it’s getting too warm for school.

Last December, TOJ spoke to Marlow Baines, a high school student in Boulder, Colorado who is a regional crew director at the youth-based environmental advocacy group Earth Guardians. The non-profit is involved in the Juliana vs. USA climate change lawsuit, in which the youth plaintiffs have asserted a constitutional right to a habitable environment and injurious abridgement of that right by a federal subsidy of fossil fuels. Baines says that since we last spoke, the plaintiffs have filed for a preliminary injunction in the Ninth Circuit Court of Appeals. To tease apart the judicial jargon, this is a court order that would prevent the federal government from issuing new leases and mining permits for extracting coal on federal public lands, leases for offshore oil and gas exploration, and approvals for new fossil fuel infrastructure. According to Baines, the motion for preliminary injunction will give the court an opportunity to mitigate exploitation of Public Trust resources while it considers the Juliana case on interlocutory appeal.

Another term plucked from the annals of the judiciary, an interlocutory appeal is issued when the trial judge determines substantial discrepancy over an important question of law that would affect the final outcome of the case. For Juliana vs. USA, the legal questions being challenged are assertions of “specific injury” by climate change, the extent of the public trust doctrine, and the “constitutional right” to a “stable climate system capable of sustaining human life”. If dissent muddies even the premise of the climate change lawsuit, the case has little chance of being heard in court.

“Democratic governments drift along the line of least resistance…smoothing their path with pleasant-sounding platitudes.” -Winston Churchill

With the lawsuit locked up in legal purgatory, Baines and the Earth Guardians took a page from Thunberg’s book and organized a youth climate strike on March 15th in Boulder, Colorado. The event was one of 950 registered strikes in over a hundred countries in which hundreds of thousands of youth boycotted class to fight for an uncertain future. The Boulder locale focused on demands for 100% renewable energy, which was one of governor-elect Jared Polis’s key campaign pledges. Globally, the effort prioritized indigenous groups and ethnic minorities, who are among the most vulnerable demographics. American demonstrators called for ambitious entreatments such as compulsory education on climate change in grades K-8 and the declaration of a national emergency in response to the climate crisis. Given the partisan nature of the topic, these ultimatums will face at least as much pushback as the Juliana lawsuit.

“Why should we go to class if you won’t listen to our most educated scientists?”

Why are young people ostensibly more receptive to the realities of climate science? Historically, it’s taken the outcry of a generation poised to confront the consequences of a problem to galvanize action to address the problem. Human myopia is limitless, but time and tide wait for no man. That worn proverb is remarkably applicable to the context of rising sea levels. Also, climate change departs from previous problems in its scale and complexity; it seems preposterous that humanity has subsumed the power to alter entire planetary systems. But the prognosis hits home when you’re young enough to experience the cataclysmic effects of such imbalance.

“The changes have been so sudden and so gigantic that no period in history can be compared with the last century. The past no longer enables us even dimly to measure the future.” Churchill’s remark could be severed from its subject—the pace of scientific progress in the 20th century—and neatly reapplied to the erraticism of an over-carbonated climate system. While the March 15th protests were the largest manifestation of the climate change coalition to date, it will take the adults currently in positions of power to implement appropriate policy. Our sitting president has been criticized for his “childish behavior”, but such assertions are a disservice to the children of the climate change movement. Should his administration align itself with scientific consensus, they may yet preserve climatic configurations conducive to the life and liberty of the nation’s youngest citizens.