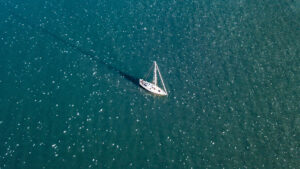 80 Degrees North: A Sailing Documentary from the Top of the World

It’s 3:30 in the morning and it’s playtime for the crew of SV Delos in a frozen landscape of icebergs, glaciers, mountains, and fjords.

“I think we’re just gonna jump on the iceberg.”

It’s 3:30 in the morning and it’s playtime for the crew of SV Delos. Just 600 miles from the North Pole in arctic summer, it’s as bright as day. 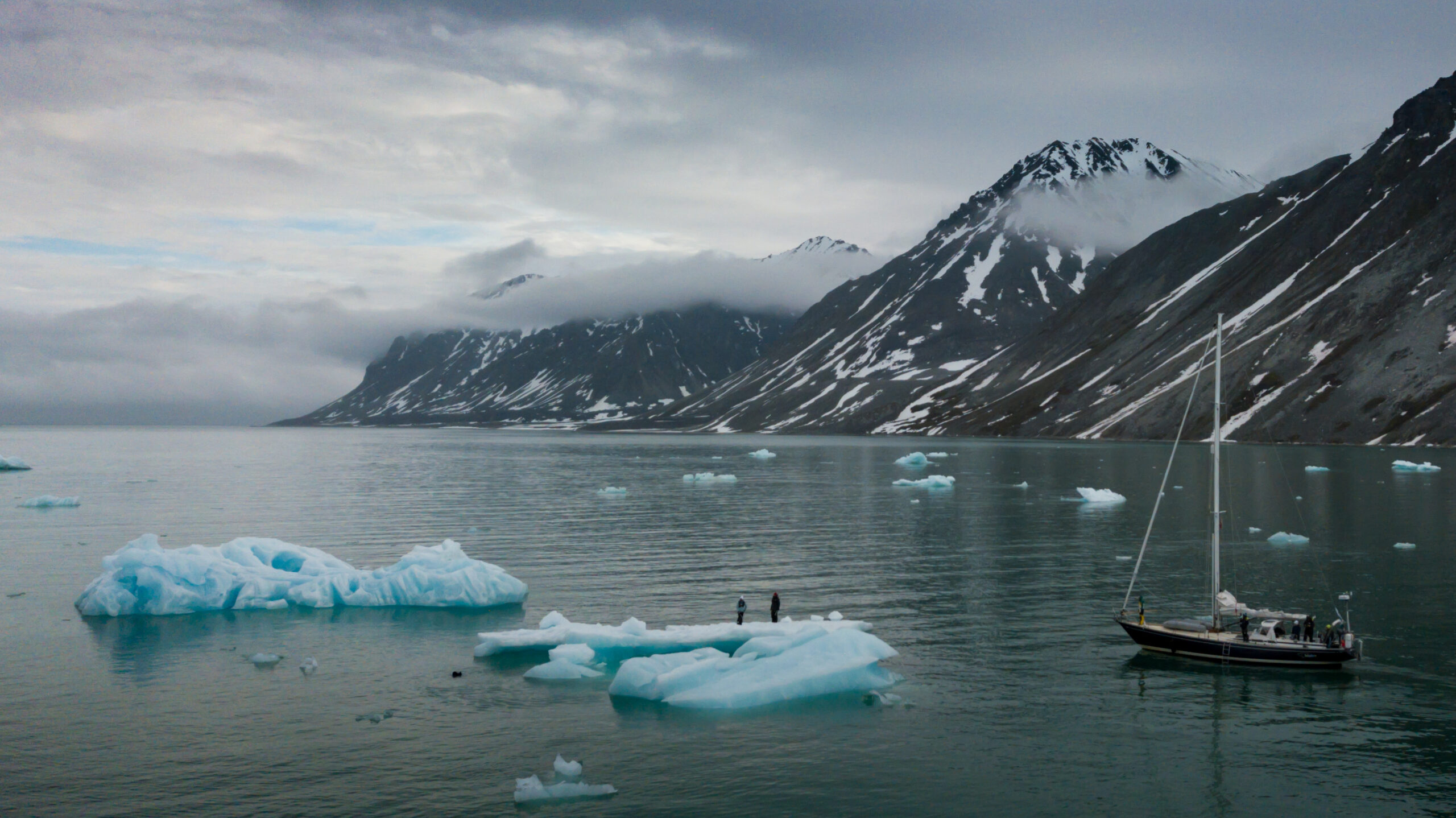 In 80 Degrees North, two sailing crews come together in Svalbard, a Norwegian archipelago in the Arctic Ocean, about midway between the northern coast of Norway and the North Pole.

For the warm-water chasers on the Delos crew, these are unchartered waters – a frozen landscape of icebergs, glaciers, mountains, and fjords. [Read more about the crew of SV Delos sailing 100,000 miles around the world.]

Svalbard was first used as a base for whalers during the 17th and 18th centuries. By the 1890s, mining operations were established on the archipelago, and around that time it became a go-to jumping-off point for arctic exploration. In 1897, three Swedes attempted to fly a hydrogen balloon from Svalbard straight over the North Pole; however, the team crashed and their remains were found more than 30 years later. [Listen to the podcast episode].

We’ve introduced Brady Trautman and Alex Blue, two of the people behind SV Delos, Youtube’s most popular sailing channel. In this documentary, they team up with 59º North, who specialize in off-shore sailing and who are also newcomers to such northerly waters, where falling in means almost certain death within minutes. Their unified goal is to circumnavigate the main island, which few people have ever done. Actually, it’s only become possible in recent years, as the pack ice has receded due to climate change. Their home for the journey is Isbjorn, Swedish for “polar bear”, a 1972 Swan 48, which was made to be a racing boat.

“Once you sail enough, all boats are generally the same, they all have a mast and sheets and a helm, so for us, it wasn’t too hard to adapt to sailing on Istbjorn,” Trautman said.

But before the journey even begins, Trautman is tasked with buying a rifle in order to protect the crew from polar bears, who outnumber people in the area. It’s the law.

You might think that this four-part docuseries is just like watching four back-to-back episodes of SV Delos on Youtube; however, the team covers several threatening issues to the wildlife and ecology of the region – from the extreme rate of glacial retreating to the negative effect of cruise ship tourism to the brutal history of whaling in Svalbard to the harmful impact of plastics pollution on Svalbard, which is in direct line of the gulf stream.

In addition to these sobering themes, the series includes a veritable “polar petting zoo” with numerous wildlife encounters, including polar bears, walruses, and a gigantic pod of beluga whales.

“The beluga whale encounter was the most special because it was multidimensional. we had a hydrophone that we dropped in the water and drones going so we were able to see them in a way that is beyond our ability as humans,” said Blue.

Trautman and Blue are used to producing roughly 20 minutes of content per week, but this docuseries was an entirely different animal.

“We worked on this project for two and a half years and we’re really proud of it, but you never really know until it’s in front of other people,” said Trautman.

But the impetus of this project was not so much about achieving the end goal without resupply no matter the cost (like other expeditions we cover on The Outdoor Journal), instead, the crew is driven by their communal curiosity to see what’s around the bend.

After two years of planning and producing the series, Trautman and Blue shopped it around to the major networks who uniformly suggested spicing it up with more drama among the crew. They rejected these notes in favor of authenticity and decided to distribute the series themselves via a “Pay What’s Fair” model, so you can choose how much you want to contribute to the project. Watch 80 Degrees North here. 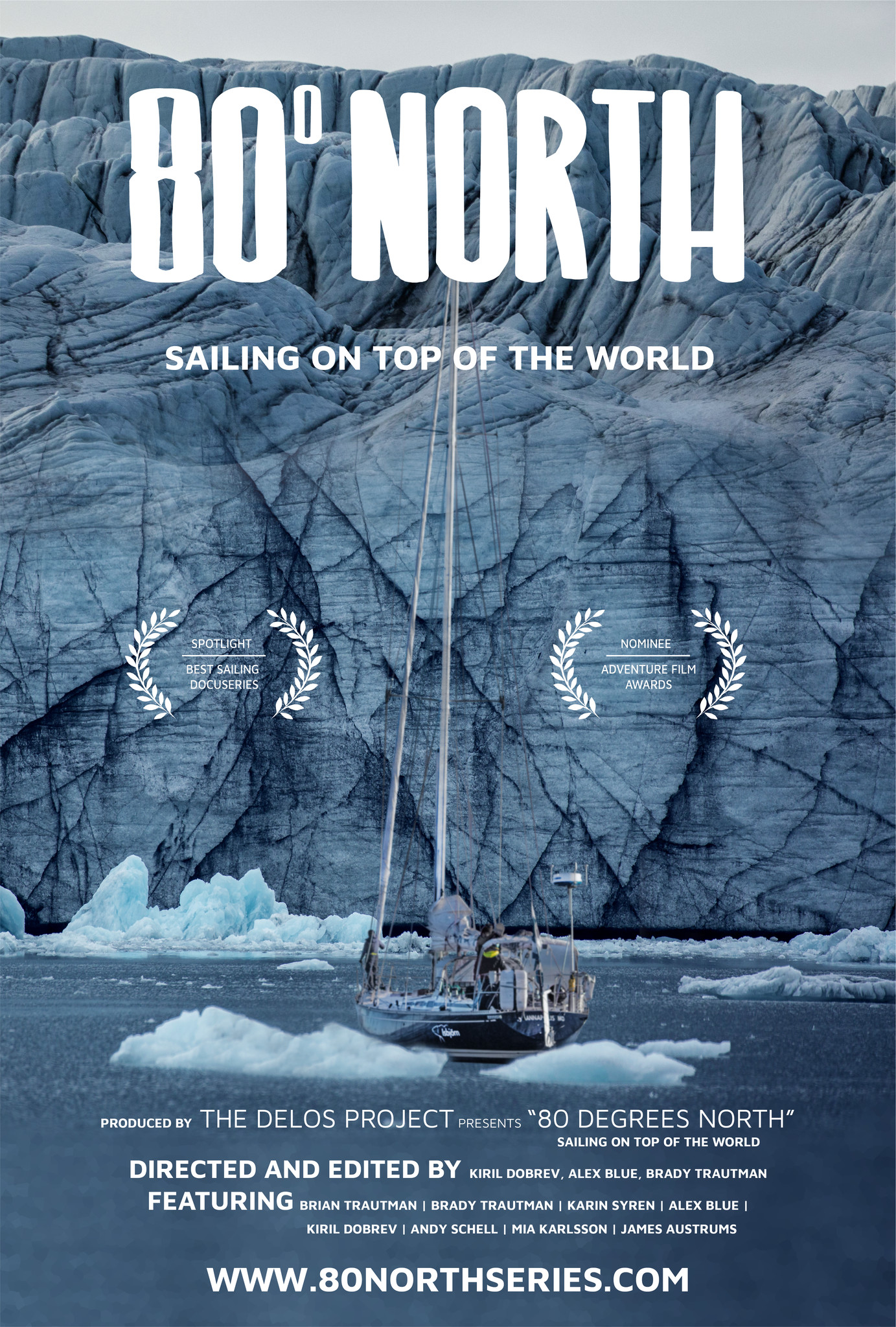 “It could be 4 dollars it could be 100 dollars. Whatever you think is fair to pay for a four-part series about sailing on top of the world,” said Trautman.

In this episode of The Outdoor Journal Podcast, Trautman and Blue discuss their biggest scare on the ocean, their most intimate wildlife encounter in the arctic, and how they used technology to capture footage of Svalbard’s wildlife from both sea and air. [Listen to the podcast episode].