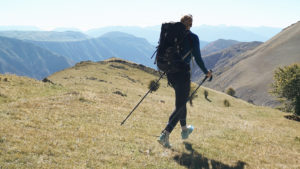 Who among us hasn’t felt stuck at some point in life? If we lose momentum in our career or in our relationships, we can begin to slowly sink and become vulnerable to the grips of anxiety and depression that reach out to grab us from just below the visible surface of everyday life. We get wound up in ruminating thought patterns and mental scripts that we repeatedly tell ourselves. “Maybe I’m just not good enough…Maybe I deserve to suffer.” Yet, when we seek help in traditional therapy, we find ourselves further trapped, our suffering is sealed off inside a doctor’s office. We sit in our problems, motionless, static.

Outdoor therapist Ruth Allen guides her clients to break through these four walls and move past periods of stuckness by connecting with nature. (Listen to the podcast episode on iTunes).

Dr. Ruth Allen is an outdoor therapist, existential counselor, adventurer, and writer based in the UK. Within her person-centered therapeutic approach, she offers weekly sessions and multi-day “intensive” journeys to bring about deep change.

Anxiety can perhaps best be described as a fear of the future, while depression conversely is a preoccupation with the past. However, Ruth Allen’s outdoor therapy techniques teach people to truly be in the here and now.

How do we fully experience the magnificence of each moment with the underlying knowledge that we will one day die? Many people struggle to overcome this overwhelming feeling of futility while trying to define meaning in their life. With Ruth’s guidance, we can learn to tap into nature’s simultaneous impermanence and interconnectedness to appreciate the preciousness of each moment. (Watch the short film Here, by sustainable rucksack brand, Millican, featuring Dr. Ruth Allen).

It’s not just walking and talking in the outdoors. Ruth has spent years developing a holistic mindset that includes different philosophical underpinnings that examine natural systems in the outdoors, using movement as a metaphor for life’s issues – for example, the changing of the seasons and the formation of landscapes over millennia. In fact, Ruth earned her Ph.D. in Himalayan geology. Ruth helps people to recollect their sense of direction and possibility by connecting with the world around them and realizing that they are part of processes that are much bigger than themselves in terms of both scale and time.

“If you like to look at the ecology of our lives, outdoor therapy is very much a mindset. It’s much more looking at systems. It’s looking at everything that there is. It’s not just focusing on my experience of being in the world. I make a lot of use of the outdoors as a metaphor and movement as a metaphor. Movement is really good for human healing and creative solution making.”

“I think something really important happens when we’re in movement”

Ruth explores the intersections between nature connection, adventure, health and wellbeing, movement and story. Nature is nonjudgmental. Its seasonality teaches us about the phases of life and the circularity of things as they come around and around again. Experiencing this moment in the here and now is a process. “We’re very storied creatures. The continual work is trying to get people to abstract themselves a little bit so they understand what the story is and the role that they’re playing in it to try and break people from that script. You have a way that you see the world, you have these holding patterns, and the challenge is to try and nudge people into seeing things differently.”

When working on our mental health, the gap between where we are now and where we see we want to be can crystalize while physically moving through the outdoors via running, hiking, climbing, etc. Instead of waiting to be healed sometime in the future, you become an active participant in the process of healing by learning to read and respond to the landscape of your own ongoing wellbeing.

MENTAL HEALTH IN THE WILD

The therapeutic benefits of spending time in the outdoors are brought up more and more in the modern health discussion with terms like “grounding” and “forest baths,” which were perceived as esoteric not long ago, becoming more mainstream. (Read more about the concept of “Rewilding” with Tony Riddle). By removing barriers between yourself and nature, by feeling the soil under your feet and between your fingers, you become more open to the raw experience of nowness. “I’m always quite clear to say that some of the concepts I’m interested in are about how the outdoors is therapeutic. What I do as my professional practice is therapy. That’s different because that’s a deeper process that’s around being alongside people to create deep change by looking at personality and personal history and family histories. I think there’s a common misconception that it’s just taking therapy from the indoor space outdoors. And it’s much more than that.”

Our society tends to hide mental health behind closed doors. By sending people indoors to deal with their problems on a psychiatrist’s couch, they are meant to feel like their problems are for them to deal with alone. Their suffering is privatized. However, it is important to allow mental health issues to be discussed publicly in a less stigmatized way because much of our suffering stems from systematic cultural inequality. “Our society gives the idea that individuals are the problem. That it’s a fault in them. We problematize them. Actually, a lot of suffering, a lot of the things that cause us pain, come from structural inequality, from societal ills. We are not alone in that. As a therapist, I see people throughout the week and there’s a lot of commonality. There’s a lot of resonance between them. If they could speak to each other and share that, I think there would be some comfort. When we send therapy indoors and we privatize it in that way, we let the government off the hook for the way the system has damaged us.”

A WORLD’S FIRST RUN ACROSS BOSNIA

Ruth scanned the globe for a challenge that would test her own sense of self as a strong-willed, unflappable, and grounded person. In autumn 2018, she ran solo and unsupported on a 350km fastpacking adventure across the Bosnian Dinaric Alps, an assumed world first. “Bosnia was very alive for me as a teenager with the Bosnian war and the genocide. It was on the news around a time that I was starting to be aware of the world, and so it always held this sort of mystique.”

Her minimalist ultra-journey ended at the summit of the Maglić massif, the highest point in the country of Bosnia and Herzegovina at 2,386m. “I wanted it to be pared back. I wanted it to be elegant in that way, to move with simplicity in getting back to the essence of things. And that’s very much the project of therapy for me. There’s something really simple about running through the landscape and sleeping and eating and running again and just being with yourself, being with the world. I wasn’t trying to achieve anything in a set time. I didn’t take any books. I didn’t have an iPod. It was very much me and my thoughts.”

Ruth didn’t run across Bosnia for world-record acclaim. She didn’t bother to collect all of her passport stamps and ticket receipts. Instead, she holds her personal challenge close to the vest as a “secret little joy.” As an example of how to deal with one’s own inner critic, Ruth combatted feeling unworthy to be part of the ultra journey community. “When I finished, I was convinced for a whole year that I didn’t need to or want to do this again. I very much felt that I had thrown a bone to my inner critic. I thought, ‘Okay, you’ve proven something to yourself, you can rest now and  get on with your life.’ But a year later, almost to the day, I just booked a flight to go back and carry on. I think it’s just the desire to continue that physical journey.” This year, she will return to the Balkans to run the next stretch of the Dinaric Alps from Montenegro to Albania.

Read next on TOJ: Ultra Journey in the Himalaya – the high altitude rock desert of Ladakh.

In this episode of The Outdoor Journal Podcast, Ruth discusses how she is developing her practice of outdoor therapy, her “secret little joy” of running an assumed world-first across Bosnia, how to deal with one’s inner critic, and how to stop trying to move the unmovable obstacles in our life. (Listen to the full conversation on iTunes).

To find out more about Dr. Ruth Allen’s counseling and outdoor therapy, visit her website: http://whitepeakwellbeing.com/

Feature image by Ruth Allen: Running down to Lukomir, a historical highland village in Bosnia Herzegovina.